Uploaded: Nov 19, 2013
It's time for Dreamforce, the annual gathering for Salesforce developers, partners and customers. It's the biggest software show, with 135,000 registered attendees and spreads beyond the Moscone Convention Center into nearby hotels. Howard Street in San Francisco is blocked with artificial grass, chairs, tables and stages for bands. Unlike last year when people basked in the sunshine, tents cover the street this year as people pick up free umbrellas to dodge the rain. 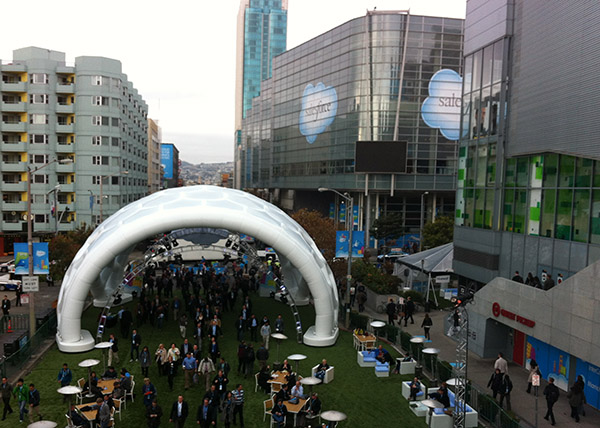 Salesforce.com provides cloud software and services to help sales people get closer to their customers. Today, Salesforce.com announced a mobile platform Salesforce1. It makes it easy to create apps for businesses.

Marc Benioff, Salesforce.com's CEO, has ditched his laptop for business trips. He runs his company on his smartphone. His vision is for an Internet of Customers. During his keynote presentation, Marc enthusiastically produced a Philips Sonicare toothbrush and said in the future it will be WiFi enabled and when he goes to the dentist he'll be able to show the dentist how often it has been used. The point being, that even a small business like a dental practice can have a more intimate connection with its customers than it has now. Given Marc said that he tends to lose his toothbrush in hotels, Philips should add a "Find My Toothbrush" option, as Apple has done in iCloud for its iPhones. I spoke with Philips after the presentation and they said "Marc is overselling a bit". They had a prototype WiFi-enabled toothbrush a year ago, but have no dates for releasing such a brush to the general public. However, Beam, in Louisville, KY, has a smart toothbrush on the market for $24.99 that sends data to an Apple or Android smartphone and tracks brushing time. 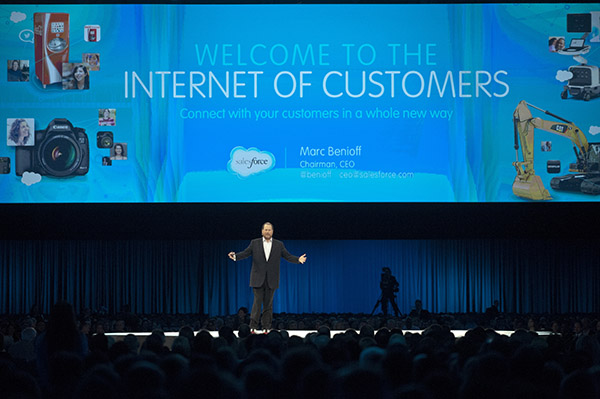 Salespeople used to find all they needed was a list of prospects and phone numbers. Then came email addresses. Now, Salesforce1 enables salespeople to know masses about a client from LinkedIn, Facebook, Twitter and other social media sites. Naturally it shows traditional Salesforce information like past purchases and demographics. Salespeople can also know masses about an individual from browsing habits on the web and company affiliations. So don't be surprised if next time you contact customer service or get a call from a salesperson they know all about you.

Salesforce used a fascinating strategy for testing and rolling out Salesforce1. It already had collaboration app called Chatter, based on a 2009 acquisition of GroupSwim. It totally rewrote the underlying platform for Chatter and released it as an upgrade. So customers who thought they had upgraded to an improved Chatter were actually testing a new product. Salesforce refined and extended this new product based on feedback from users. Then when it was ready for release they called it Salesforce1, a foundation for new mobile apps.

For the third quarter of its 2014 financial year, that ended on October 31st, Salesforce's revenues were $1B for the first time and its growing at 36%. It is obsessed with gaining market share, at the expense of short term profits, so the last two financial years have seen net losses.

If you want to learn more about how to write a simple Salesforce App, Udacity (located in Los Altos on El Camino Real) is offering a two week online course. The full course rolls out in January, but you can try it now for a discounted rate of $105/month. It shows you a simple point and click method for developing apps. Udacity differentiates itself from Coursera by focusing more on courses that help people get jobs.

Some of the best jobs around
By Sherry Listgarten | 5 comments | 3,641 views

Fewer Michelin stars awarded on the Peninsula this year
By The Peninsula Foodist | 7 comments | 3,151 views

People and Relationships Never Stop Being a Work in Progress
By Chandrama Anderson | 3 comments | 2,077 views