That much is obvious, from the way Smitten got its start (Goldman selling ice cream on the streets of San Francisco out of a red Radio Flyer wagon) to how the ice cream is made (with a patented, carefully engineered ice cream machine that uses liquid nitrogen to freeze made-to-order batches of the sweet stuff).

Goldman, a Boston native who lives in San Francisco, is expanding her ice cream business from one Hayes Valley location to four across the Bay Area, including one in the Los Altos Whole Foods that's slated to open mid-December.

Peninsulites might yawn in the face of another ice cream shop (especially with the weather we've been having), but Smitten sets itself apart in a crowded industry in a few ways.

While Goldman was a student at the Stanford Graduate School of Business in the early 2000s, she started researching how to make great ice cream.

"I basically learned that if you freeze ice cream really, really cold and you do it well, you can actually create a smaller ice crystal which creates a better texture," she said. "If you can perfect that process ? you can do something really cool, pun intended."

Using liquid nitrogen, which clocks in at -321 degrees Farenheit, is the ticket to that perfected process. (Smitten might have kickstarted this trend in the Bay Area, which other ice cream proprietors are now following, including Scoop Microcreamery in downtown Palo Alto.)

So obviously, Goldman ended up buying a bunch of ice cream machine parts off Craigslist and worked with an engineer to retrofit an existing mixer, playing around with the machine, nitrogen and resulting product. After she graduated from Stanford in 2007, she went around the country, talking to people developing different things within the ice cream world.

"I really didn't think any of them had legs," she said. "I realized after awhile to do this, I had to do it myself. It really didn't exist yet."

Goldman teamed up with a retired engineer and spent two years in his "basement shop" building a prototype for the perfect ice cream machine. Once it was built (and later patented and named the "Brrr" machine), she was of course out of money, having spent her life savings on the machine.

"So I started selling ice cream on the street out of a Radio Flyer wagon, which was a good way of getting it out there fast," she said. (The red wagon is now the company's logo.) "Of course, the wagon is a reference to the wholesome, old-fashioned approach as well as this crazy machine sitting on top of it referenced that we're both going backwards in time and forward together using fresh, pure local ingredients with a real food-centered approach."

She eventually opened the Hayes Valley brick and mortar store in April 2011.

What you get at Smitten is a frozen-to-order serving of ice cream made with only the most local, most seasonal ingredients available (of course). Flavors include staples like salted caramel, fresh mint, classic vanilla and TCHO chocolate, plus season-driven ones like rhubarb crisp, maple brown sugar squash and cinnamon apple crisp

The Los Altos location, twice as big as the Hayes Valley store, will have six "Brrr" machines on site, an expanded menu with 50 percent more flavors and additional items, such as "Brrrgers," which are made-to-order brioche ice cream sandwiches crafted by Smitten's pastry chef, Robyn Lenzi. (Having trouble picturing what that would look like? See a photo here.) They'll also be doing sundaes, floats and vegan popsicles.

The ice cream store is not technically inside the Whole Foods, but rather adjacent. There's an entrance from within the market as well as from outside in the front parking lot. 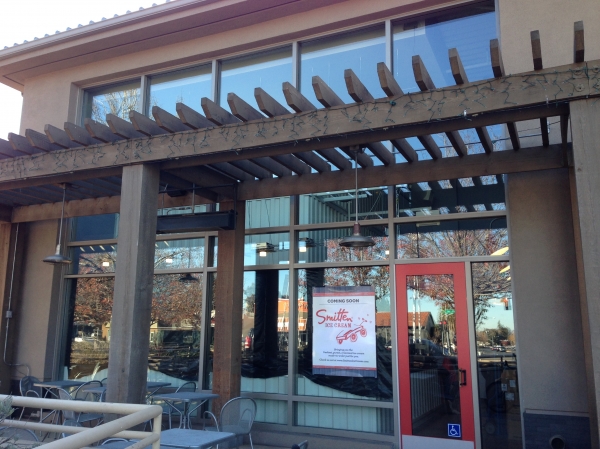 If you've ever been to the Hayes Valley store, which resembles a shipping container, you'll find the same motif in Los Altos.

"It looks like shipping containers stacked to the ceiling," Goldman said, with a 40-foot-high ceiling. There's also a lot of warm barn wood and corrugated metal, all referencing dairy and agriculture, Goldman explained.

Ice cream used to be a regular staple of my diet, and I still like it but,
but these days I eat less ice cream than ever. It's too rich and the
quality of ice creams have gone down to the point where I only enjoy
really great ice cream such as Gelato Classico or the like. Frozen
yogurt is just a pretend ice cream.

Gelato Classico used to have a Fresh Peach flavor when they first opened
for a few years that was fantastic. Most peach ice cream is pretty awful,
but they miraculously captured the taste of fresh peaches in the summer
and it was a huge treat. Sadly, they no longer make that flavor, so if
Smitten Ice Cream can make a peach ice cream, I will promise to try it
since I often visit the Los Altos Whole Foods Market.

Report Objectionable Content
Posted by Brit, a resident of Palo Verde School,
on Dec 10, 2013 at 2:38 pm


Really wish I could get some decent soft serve ice cream (not frozen yogurt), the creamy stuff. I long to put a Cadbury flake (available at Piazzas) and some red stuff called monkey blood, and have a proper 99. Web Link

Report Objectionable Content
Posted by Elena Kadvany, a resident of another community,
on Dec 10, 2013 at 3:27 pm
Elena Kadvany is a registered user.


Crescent Park Anon: I'm sure Smitten will have a peach flavor once the fruit is in season. I agree about an increase in richness that doesn't compute into an increase in quality, but I think Smitten is different.

Brit: I couldn't wait to see what a proper 99 with monkey blood is after reading your comment - I had never heard of the term or seen one! Perhaps a soft serve revival is in order.

Report Objectionable Content
Posted by nikonbob, a resident of Old Mountain View,
on Dec 11, 2013 at 3:00 pm


I had nitrogen-frozen ice cream, made on the spot, at a baseball game in Utah this summer. Regular milk with choice of additions was quick frozen with a blast of the gas. I was skeptical, to say the least, but it was actually amazingly good. Being Utah, they didn't have it at the Sunday game, and I was quite disappointed!

Can't wait to be Smitten!


Liquid nitrogen definitely does make the best ice cream (I\'m totally hooked on it after trying it at Ice Cream Lab in LA) but honestly I\'m not crazy about yet another San Francisco based chain infiltrating the peninsula. We have Cryo Cream in Burlingame (favorite: The Elvis) and Scoop in Palo Alto (favorite: Bourbon Vanilla with Salted Caramel) which are both delicious, independent, and LOCAL. I have no desire to support the San Francisco based companies that decide to pop a store in wherever they think there is money to be made, and then pretend that they are all quaint, local, and community-minded with their fake hipster barn inside Whole Paycheck.

Report Objectionable Content
Posted by ds, a resident of Leland Manor/Garland Drive,
on Dec 11, 2013 at 8:55 pm


I enjoy reading your blog. Keep up the good work!

Report Objectionable Content
Posted by Elena Kadvany, a resident of another community,
on Dec 13, 2013 at 8:49 am
Elena Kadvany is a registered user.


Aaron: I do agree with you (especially on the deliciousness of Scoop's bourbon vanilla with salted caramel), but I don't think Smitten should be characterized like that. If you read my post, the founder really did this whole thing on her own, from engineering an ice cream machine for years to literally selling ice cream out of a Radio Flyer wagon because she had no other way - or the means - to do it. It's a very homegrown company that yes, now is expanding to other communities than the one it started in, but I don't think that necessarily takes away from its value. Before it blew up as San Francisco's next big ice cream place, it was just another Scoop or Cryo Cream (in my opinion). What if Scoop were to do so well it opened a location in San Francisco a few years down the line?

ds: Thank you so much! I appreciate it.


Hi !
I\'m mother of 3 kids, who loves ice cream too ! But coming from south Mexico (Veracruz Puerto), a place where you can enjoy a really good natural home made ice cream, have been hard to find something similar like that here in the Bay Area, I have been tasting a lot of different brands but nothing like that, usually some of them have a lot of sugar, artificial flavor, more water then cream and not pieces of real fruit. Frozen yogurt is not ice cream.
But I know how to make home made ice cream and I going to try to do some here and invite my friend to taste it, almost sure they love it ! :)

How we eat away at our open space, even in Palo Alto
By Sherry Listgarten | 5 comments | 7,398 views

Three new restaurants from former Manresa chef David Kinch and his team are coming to Los Gatos
By The Peninsula Foodist | 2 comments | 4,540 views