Most memorable for me was the half time show.

Question #1: Who is Bruno Mars?

Question #2: What up with the Red Hot Chili Peppers?

Thru their entire performance, were you thinking back to 2004 when Janet Jackson's half-a-second wardrobe malfunction was considered scandalous, Moral America was outraged, and the media talked about it for weeks? Fast forward ten years, and now it's perfectly OK for the Chilies to dance around half naked for an excruciating length of time. And the media is silent.

I guess I don't understand. We applaud a group of guys who come out titts-a-blazing for a family show and an audience of millions with extremely varied ideas on what is socially acceptable or not. But if I walk to the mailbox without a shirt, and no one sees but a drive-by cop, he can arrest me?

This debate has been going on for years, but it really hit home on Sunday. Women are forced into submission because someone decided a long time ago that females are too sexual for public viewing. Men can broadcast their bosoms and waggle their nipples on national TV, but our "free society," requires women by law, or at least by extreme social expectation, to wear nothing less than a boobie burka.

OK - I don't want to bear it all in public, but men shouldn't be allowed to if women can't. It's either socially acceptable and legal for everyone, or for no one. Personally, I didn't care to see those guys in their shorty birthday suits, and the men sitting around me didn't either.

You may be asking yourself, "Blah, blah, blah Laura. What does this have to do with food?"

Well? nothing... So how about this?

Sometime when I get upset or angry, I turn to food. It's not the best coping mechanism, I know, so at least I try to choose foods that aren't that bad! Sparkling water is a great for the easy problems. But for issues that really get under the skin ? like inequality for women - it's frozen raisins.

Care to share? If not, here's a way to chomp your way to repose, or just enjoy a satisfying snack.

Directions: Transfer some raisins into a small glass container. With the lid on, freeze for 24 hours. Pull some out on a hot day, or just when you need a good chew. Store 6 months in freezer. 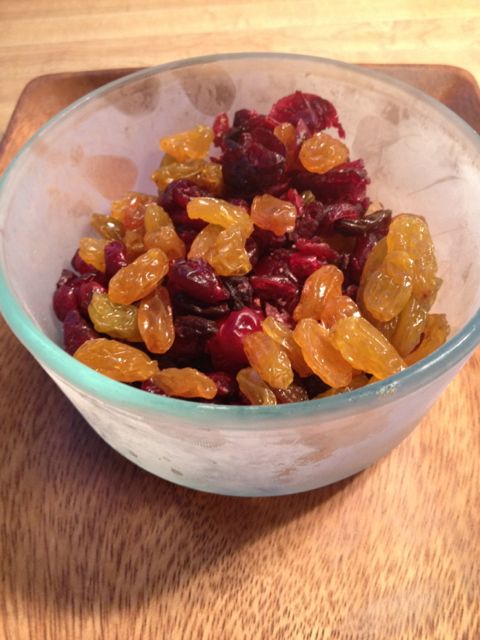 Bravo! I'll be the first to toast you while I try out your recipe for frozen raisins while topless.

Craving B. Patisserie's perfect pastries? The San Francisco bakery is popping up in San Mateo next week
By Elena Kadvany | 0 comments | 11,728 views