Uploaded: Feb 13, 2014
In line with Mike Finley's goal to transform his Mountain View restaurant, Bierhaus, into a California-German fare standout,
he's brought in some new blood from San Francisco to run the kitchen.

Aubree Arndt, who most recently cooked at Maverick in San Francisco (now indefinitely closed due to an October fire) and Penrose in Oakland (opened by a Chez Panisse alum in November), started chefing at the Castro Street eatery in early 2014. She did so at the prompting of Maverick co-owner Michael Pierce, who is also involved at Bierhaus on a consulting basis. 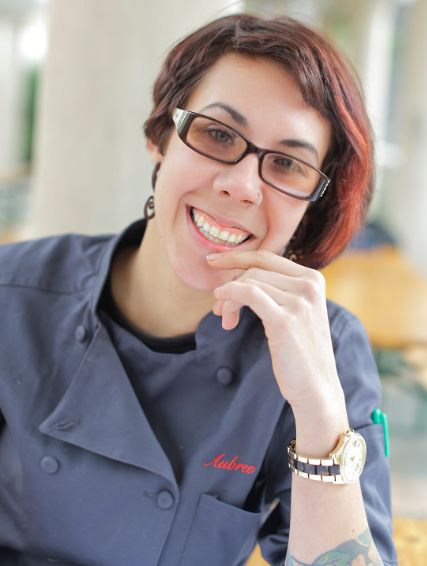 Arndt is half German, half Polish; a graduate of Le Cordon Bleu's Scottsdale, Ariz., campus and has cooking experience from Denver to San Francisco, making her a prime person to execute Finley's vision for his newly renamed restaurant.

"I've been brought up around that kind of food ? a ton of sauerkraut, beets, pierogi, sausage ? since I was a kid," she said. "So I've been in that type of food my whole life."

She said she's focusing most of her energy on new shareable plates (as Finley said was his hope in November) like a butcher platter for two to four people with local cured meats, beer ricotta pickled vegetables, pimento cheese, mustard, pretzel ($20); a cheddar bratwurst from San Francisco's 4505 Meats with braised red cabbage and celery root slaw ($9); potato pancakes with apple relish, gruyere cheese, dill sour cream and bacon ($9), among others.

She also recently added spatzle, a savory dumpling dish common in areas like southern Germany, Austria, Switzerland and Hungary, to the menu. Arndt's comes topped with shredded gruyere cheese, mustard greens and sautéed mushrooms ($8). This week, she threw down with pork belly, serving the meat with a fermented rutabaga and walnut puree, roasted Brussels sprouts and a rutabaga and Brussels sprout sauerkraut.

Arndt said she's been making her own 15-day-fermented, garlic-infused sauerkraut "from the moment (she) walked in," so there's plenty of that to be found on the revamped menu.

Plus, sauerkraut making runs in her family, the Michigan native said. One of her uncles lives on the same plot of land as other family members in Michigan and has a farm where they grow a lot of cabbage ? and thus, make a lot of sauerkraut.

"They give it out for Christmas and stuff; they can it (and) do a ton of pickling," she said. "So I've been eating (my uncle's) recipe for a long time. I based mine off of it (and) kind of tweaked it."

Arndt said the Bierhaus team also plans to shorten its burger menu to "three to four amazing burgers that are our signatures." The rest of their energy will be devoted to the shareable appetizer section.

The Nut House is back -- with a self-taught chef and Palo Alto native in the kitchen
By Elena Kadvany | 15 comments | 6,562 views

Some of your comments on nuclear energy
By Sherry Listgarten | 22 comments | 5,381 views

Public statues: Up or down? But does the historical importance of the individuals represented matter?
By Diana Diamond | 38 comments | 3,400 views

Stay Together or End the Relationship? Independence or Interdependence?
By Chandrama Anderson | 0 comments | 902 views