Uploaded: Mar 7, 2014
Downtown Palo Alto is getting its first solo juice shop in April, with San Francisco-born Project Juice on its way to 575 High St.

Project Juice offers 15 menu staples, plus two to three seasonal drinks offered in stores. Prices start at $7 per juice and average about $9. View the full menu here. The company also offers cleanses, which can come pre-packaged or be custom-created.

Project Juice is a homegrown business, started in 2012 by couple Rachel and Greg Malsin and business partner Devon Briger, an Atherton resident. The two relocated from New York City to San Francisco for Greg's job the previous year. For Rachel, who has numerous food allergies and suffers from celiac disease ?¬ a condition that damages the lining of the small intestine and prevents it from absorbing certain parts of food ? conscientious eating and juice-consuming is a major priority.

"Before I even knew that I had celiac (disease), I would eat raw food and juice because it was the only thing that I could eat that I didn't get sick from," she said. "I didn't know why. I just knew if I ate this food, I felt good."

It's hard to imagine now in juice-crazed San Francisco, but she said when she first moved to the city in 2011, it was bereft of quality retail juice shops.

And thus, another Bay Area gastronomical venture got its start. The couple and Briger started by delivering juice (which they still do). They graduated to running a pop-up at a coffee shop in San Francisco's Jackson Square for two months, and the rest is history. Last June, they opened their first brick-and-mortar at the Crocker Galeria in San Francisco's Financial District. They opened their second on Polk Street (also in San Francisco) in February. Palo Alto is slated to open in early April, and Rachel said more expansion plans are in the works.

Rachel said they've been eyeing the South Bay for expansion for awhile, particularly Palo Alto, but most University Avenue spaces are too large for a small retail shop's purposes. (All of Project Juice's drinks are made off-site at a production facility in South San Francisco, and the company's main source of produce is a farm in Watsonville.)

They found the 500-square-foot High Street space about six months ago, Rachel said, and got the ball rolling. Here's a sneak peek of the space, courtesy of Project Juice: 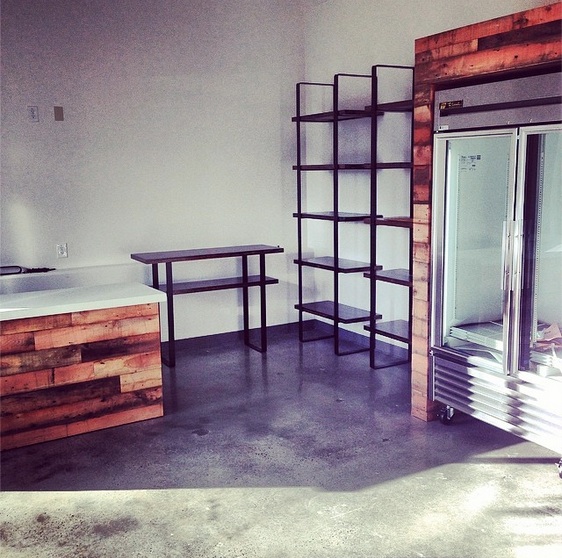 They've also brought on Kailey Jean, a local vegan chef, to cook up raw, vegan food that will eventually ? not right away ? be offered in the store as grab-and-go type items. Individuals who might not want to go the full mile with a juice cleanse can opt for a cleanse supplemented by Jean's food. Other pre-packaged healthy snacks will be sold in-store.

Rachel has a broader vision for the store, planning to offer seminars run by a holistic health practitioner that works with the company. She also said she thinks California is still behind in terms of the raw food movement, and hopes to make a dent in that.

by by whole foods, better juice and recipes at this place. those almond date type shakes were at new age food store that was at torn down edge club building in 1972. small local instead of corporation spy cam \'\'whole foods market\'\' .

Report Objectionable Content
Posted by Elena Kadvany, a Mountain View Online blogger,
on Mar 8, 2014 at 8:52 am
Elena Kadvany is a registered user.

Report Objectionable Content
Posted by Just wondering, a resident of Crescent Park,
on Mar 9, 2014 at 2:03 pm


I've been curious what kind of disgusting or unhealthy substances people eat, that they need to "cleanse" their insides.
Perhaps imaginary problems are best resolved with imaginary cures.


Is this Palo Alto or Beverley Hills ??? I've lived in Palo Alto for more than 25 years. It's a sad reflection of our changing demographics when mom and pop places like Cho's are forced out and ridiculously overpriced juice shops open. The potential customers of this type of place already have their private chefs prepare their juice on demand,any others are just foolish. Perhaps they should've opened in Atherton instead ?

Report Objectionable Content
Posted by CrescentParkAnon., a resident of Crescent Park,
on Mar 11, 2014 at 12:00 am


Seriously?? ... you are talking about two way different areas of the city for one thing. If there are no customers for the juice place, it will go out of business, but juice is a damn site more nutritious than greasy dim sum. We have plenty of Chinese places, why do you have to go ballistic just because we get one juice place? Connecting the juice place to Cho's is just silly. Palo Alto needs some nutritious food places, and even vegetarian/vegan. Most of the places around here are way overpriced and the food is atrocious. Low quality cheap vegetable and fake soy meat.

More and more health studies are showing the more meat you eat the shorter your lifespan will be - especially the way we keep cutting corners and getting contamination in our massive factory ranches. A worse food system has never existed, and just like everything else it wants to jump on the too big to fail bandwagon and get special government protection. We can call that fascism, because it's certainly not socialism.

Just for kicks why don't you check out some of the videos on the NutritionFacts.Org website: http://nutritionfacts.org

Report Objectionable Content
Posted by Nora Charles, a resident of Stanford,
on Mar 11, 2014 at 3:43 pm
Nora Charles is a registered user.

Three new restaurants from former Manresa chef David Kinch and his team are coming to Los Gatos
By The Peninsula Foodist | 4 comments | 4,789 views

Doing more with the natural spaces we have
By Sherry Listgarten | 3 comments | 1,479 views