Uploaded: Apr 7, 2014
John Tucci, veteran brewmaster of Gordon Biersch Palo Alto, is moving on after 16 years with the company to open his own brewery in South San Francisco later this year.

After searching for more than a year for a worthy space, he's settled on a 10,000 square foot South San Francisco warehouse. He's hoping to break ground on 47 Hill Brewing Company, named after the reported 47 named hills of San Francisco, in late May or early June.

"I guess I've been doing it so long it seems like the natural progression of things," he said. 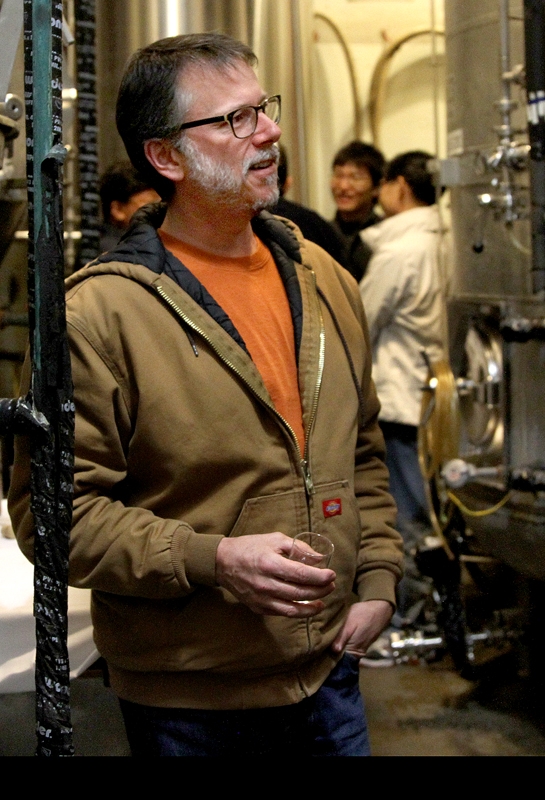 Tucci at an event at Gordon Biersch in February 2014. Photo by Veronica Weber/Palo Alto Online.

He said 47 Hill's beer will draw on "innovative tradition," a.k.a modern twists on traditional recipes. There will be some German and Belgian beers, plus a few "hybrid styles," he said.

The brewery will be a production facility focusing on the draft beer market first and foremost, Tucci said.

There will also be a tasting room and kitchen. He said he doesn't have a particular chef on board or in mind right now, but he wants to specialize in gourmet sausages and quality salads.

"It's going to be a very simple menu, but very high quality," he said.

He's in the midst of various city processes right now, but hopes to be open in late summer or by the end of the year. He hasn't yet set what is sure to be a bittersweet end date for his Palo Alto post.

"It's going to be tough. I've been with them for 16 years," he said. "But new beginnings are always real good."

I can only imagine that the beer will be top quality as John is a consumate professional. The story of Henry Ford comes to mind as he surrounded himself with the best minds of the day. John strikes me as an individual who will do the same and be successful at whatever he endeavors. Best of luck, sir, and Godspeed!

State Street Market plans overhaul of its eateries as it cuts ties with Bon Appétit, triggering layoffs
By The Peninsula Foodist | 11 comments | 3,995 views

Doing more with the natural spaces we have
By Sherry Listgarten | 6 comments | 2,566 views