Uploaded: Apr 30, 2014
Last Saturday, I was invited to the Computer History Museum annual Fellow Awards Dinner. Each year distinguished pioneers in the computer industry are honored. The awards ceremony started in 1987. This year the honorees were Lynn Conway, John Crawford and Irwin Jacobs. 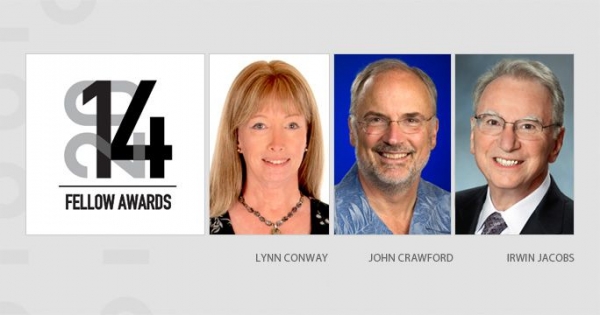 Lynn Conway, emeritus professor of electrical engineering and computer science at the University of Michigan, wrote a pioneering textbook with Carver Mead, "Introduction to VLSI Systems". This was the definitive text on how to design computer chips, used by many attendees at the event.

John Crawford was the chief architect for Intel's 386 and 486 microprocessors and one of two design managers for the next generation Pentium. These chips were the engines for personal computers, branded by the slogan "Intel Inside".

It's not often that a business leader, as opposed to a technical leader, becomes a Computer History Museum Fellow. Irwin Jacobs studied electrical engineering at Cornell, then went on to MIT to get a PhD. Jacobs is best known for co-founding Qualcomm, a San Diego company, that makes chips for cellphones and for fiscal year 2013 was a $25B company. The company started by tracking vehicles, but then pioneered CDMA technology that was notably used by Sprint and in Korea, the other main cellphone technology being GSM. Since then the company has gone on to make high-speed LTE components that fuel 4G networks.

I used to be a regular attendee at the Fellow Awards, as my husband is a trustee of the museum, but having skipped a few years, it was encouraging to see the tremendous progress the museum has made under the leadership of its CEO and president, John Hollar. He started the evening by rattling off statistics and listing people who'd visited the museum ? Google chairman, Eric Schmidt, Facebook COO, Sheryl Sandberg, California governor, Jerry Brown, Israeli prime minister, Benjamin Natanyahu and more.

Earlier in the day, driving back from the Georgia O'Keefe exhibit at San Francisco's de Young museum, I had listened to a Computer History Museum interview on "The Art and Technology of Cirque du Soleil". Welby Altidor, Cirque's Director of Creation and Matthew Whelan, its Technical Director, were interviewed by Will Travis, CEO of creative agency Sid Lee USA that has partnered with Cirque du Soleil. The interview discussed technologies behind Las Vegas's Michael Jackson Cirque show. The show demonstrates how far computers have come in augmenting the skill of acrobats and gymnasts to create dazzling experiences using multiple lights, screens, GPS technologies and animations. The Cirque du Soleil interview is part of the Computer History Museum's Revolutionaries Series that honors computer pioneers. It is aired on KQED Plus TV on Tuesday evenings and broadcast at 2 p.m. on Saturdays.

Opening the weekend of May 10th/11th the Computer History Museum is partnering with Google to look at the history of autonomous vehicles. On Saturday May 31st and Sunday June 1st, rides will be offered to the public. However, all spots are now full. You've probably seen the Google Self-Driving Cars around Mountain View. Even if you can't get a ride in a car, you can learn about the technologies that help them navigate by visiting the Computer History Museum.


To supplement your comments on Irwin Jacobs: While he might be most familiar to today's journalists for his role at Qualcomm, he has indeed been a "technical leader" in engineering far longer -- at least as much so as the other two honorees you mentioned.

Jacobs taught electrical engineering from 1959 to 1972 and co-authored the standard US graduate-level communication-theory textbook (Wozencraft and Jacobs), in use for nearly 50 years. He is among a generation of academic communication theorists (which also includes Andrew Viterbi, Jim Omura, and G. David Forney) who applied their expertise to commercial applications only after contributing significantly to the theoretical understanding of communicating digital data over real-world media.


Max, thank you for augmenting my article. Much appreciated. I have memories of Dr Bill Lee from PacBell explaining the virtues of CDMA in the mid-80s and was totally blown away by the brilliance of Qualcomm's technology.

Report Objectionable Content
Posted by Max Hauser, a resident of Old Mountain View,
on May 2, 2014 at 1:09 pm
Max Hauser is a registered user.


Since you're interested, Angela: a little more technology history from someone who has worked technically on this stuff. "CDMA" is a modern communications-industry techspeak acronym for what's been known generically longer (many decades) as direct-sequence (DS) spread-spectrum communications. Radios based on this idea don't transmit around a single carrier frequency, or even a set of alternating carrier frequencies ("frequency-hop" spread spectrum), but impress their information onto a continuum of frequencies in such a way that other transmitters can share the same continuum. In principle, if you could listen to the transmitted signal, it'd sound like random noise, where a traditional radio would sound like a steady musical tone. Different DS transmitters sharing a frequency spectrum use distinct "spreading codes" which lets them be discerned and decoded in a corresponding receiver. This has multiple advantages over classic narrowband radios, including rejection of interferers and lack of diffraction/multipath problems (the reason FM stations fade in and out as a truck or airplane passes).

Firms such as Qualcomm adapted this existing idea to consumer phones, with suitable protocol standards, after chip technology became available to build it affordably. DS spread-spectrum digital _receivers_ are far more complex than classic AM-genre digital radios; from the 1960s until about the 1990s, DS spread-spectrum communications hardware was costly, limiting its use to critical communication roles (aerospace, military). To put this in perspective, using the electronics technology that enabled pocket-sized AM "transistor radios" 60 years ago, a DS spread-spectrum receiver might be the size of a refrigerator, cost $20,000, and consume as much power as a house. Thank Moore's Law for today's e-appliances.

Some of the best jobs around
By Sherry Listgarten | 5 comments | 3,636 views

Fewer Michelin stars awarded on the Peninsula this year
By The Peninsula Foodist | 7 comments | 3,143 views

People and Relationships Never Stop Being a Work in Progress
By Chandrama Anderson | 3 comments | 2,073 views