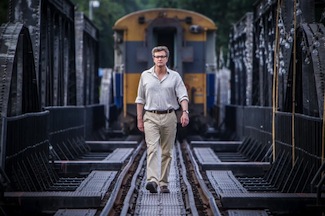 Playing at CinéArts Palo Alto Square, The Railway Man adapts war veteran Eric Lomax's 1995 memoir. The story tells of how Lomax was tortured by the Japanese after his capture in Singapore in 1942 during World War II, his untreated PTSD following that, and his efforts to overcome the trauma. The story is told through a series of flashbacks. It starts with a confusing sequence that shows Lomax as a middle-aged adult falling in love with "Patti," a nurse (Nicole Kidman) he meets on a train. There are several scenes that show Eric experiencing horrifying flashbacks and nightmares. The older Eric Lomax is played by Colin Firth.

Patti asks Eric's army friend what happened and he tells her about the torture Lomax experienced while in a P.O.W camp. The younger Lomax is played by Jeremy Irvine. Lomax was helping to build the Burma Railway under slave labor conditions. He builds a radio to receive word of what the Allies are doing. When the radio is discovered, he takes responsibility and is tortured by his Japanese interrogator Nagase (Tanroh Ishida). The scenes of torture are horrifying?enough so that I looked away and enough so that it is pretty difficult to pull off the true-story ending, which centers around healing and forgiveness.

It's the performances set against dramatic cinematography that carry the movie and kept me from leaving in confusion at the midpoint from the structure of the storytelling, and the sentiment and ideas expressed. Colin Firth gives an excellent, restrained performance as usual. Nicole Kidman plays "female nurse angel" quite well, but she has little to say or do besides being a catalyst for recovery. To evoke the trauma, the movie relies heavily on camera work and swelling music. It is a slick representation of PTSD. Since I have a more contemporary sensibility, I could have done without an excessive score cuing me how to feel about torture and trauma - if you put it up on the screen, any rational human being can see how horrifying it is.

The curiously dull script descends into the formula for war movies and it tries too hard to matter. There is some pseudo-depth about "honor" in the Japanese tradition versus the "bravery" of the British tradition. Specifically, Nagase believes that Lomax should have killed himself rather than endure torture. Lomax, in the Western tradition, thinks the greatest honor is to honor one's life.

In the end, because this is a Western movie, Western values win out without much genuine complexity. The concluding section is valuable, but how we get to the touching true-story moment of transcendence is nothing special, just the same old Manichean formula. Although I was moved by the end, there was an opportunity here to show the audience that war is monstrous and destroys people without turning the primary Japanese character into a clear-cut monster that needed redemption. We know that one already. Tell us a deeper story in a more interesting way.


I beg to differ with this curiously dull and predictable review. I found this movie to be a warm, simple story of redemption, both on the part of the British soldier, as well as his Japanese counterpart. Maybe the movie lacks the profound depth and razor sharp insight into human nature commonly found in Silicon Valley society, but, although possibly not up to Eastern standards, I found it quite enjoyable.


Jeff: Fair enough. If you like this story, you might also like the 1995 BBC version "Prisoners of Time." But not being "Eastern", I wouldn't know whether it is up to Eastern standards or not. I speak only for myself and perhaps others with a taste for art and complexity and empathy, not for Silicon Valley, a place of widely differing opinions and tastes like the rest of America. More my speed is "Death and the Maiden" - other than the ending, a similar storyline, but more interestingly handled.


This movie should have been much better, but the war scenes were so unrealistic. The POWs looked like they had just come from the barber's shop. Clean-shaven, short back and sides. No signs of malnutrition; and those brutal beatings would surely have broken bones, at the very least. I know it was a true story but I think either the beatings were exaggerated or the film didn't go into depth the rehabilitation the prisoners had to go through upon repatriation.
Colin Firth is a very good actor, but the actor playing his younger self was much too pretty and clean cut for the role. (Compare Christian Bale in Rescue Dawn.).


Ruth - I agree. I think a lot of critics were surprised that the torture scenes didn't result in more severe injuries. And yes, the POWs were so clean, they did not reflect the bad conditions they no doubt were in. I haven't seen Rescue Down, but I thought the younger actor here gave a fine performance on his own, just didn't work as a younger Colin Firth.


FWIW I thought that the book was much better than the movie.


Peter - good to know. I can see how I would find this a very moving first-person story in memoir as opposed to movie form. I think they took some license with the book, didn't they? Wasn't Eric Lomax married when he met the nurse?


I haven\'t seen the movie but after reading the book and then the movie reviews, I doubt I will. The reviews tell me that the movie depicts the story in a very convoluted and "made for cinema" way. I understand the need for that, but the whole premise of the flashback scenes and non-POW looking inmates.............


I thought the movie was well done except the condition of POW's of Lomax's group. The beatings definitely would have produced very severe injuries but if they had been shown I doubt anyone would have sat through the movie. Most comments I am hearing is that people did not think the Japanese were that brutle. What I found interesting in researching Lomax is that he wrote nothing in his book of his first wife and three children. There is more to the story than has been told or written by Eric Lomax. Thank you for review.

Premarital and Couples: What Does Sex Mean to You?
By Chandrama Anderson | 0 comments | 2,566 views

What I will remember about Ruth Bader Ginsburg
By Diana Diamond | 5 comments | 1,842 views