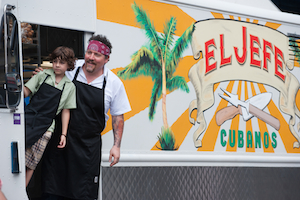 Jon Favreau's Chef is a charming comedy about a chef whose inexperience with the Internet causes him to lose his job. The effortless chattiness and camaraderie took me back to Favreau's early films Swingers and Made, but unlike those movies Chef is sweet and family-friendly. The film starts with some knife action?movie shorthand to let us know that Carl Casper is a talented chef. We learn that Carl is divorced from his wife Inez (Sofia Vergera) with whom he has a son Percy (Emjay Anthony). Ramsey Michel, a major food blogger and critic (Oliver Platt), is coming to Carl's restaurant.

Carl wants to pull out all the creative stops to impress the critic. But Carl's boss Riva, a restaurant owner played by Dustin Hoffman, wants him to stick to crowd favorites like a caviar egg and molten lava chocolate cake. Riva comments to the effect that people who go to a Rolling Stones concert want to hear Satisfaction, not something new. Carl reluctantly agrees to stick to crowd favorites.

The critic writes a withering review, noting that 10 years ago when he tried Carl's food, the food was inspiring, but now it seemed as if Carl is trying too hard to be liked and that the result is "cloying." The review goes viral on Twitter. Carl learns how to use Twitter from his son and shoots back a nasty comment, thinking that the comment is private. Of course, this earns him thousands of followers. Carl still doesn't get how public Twitter is and challenges the critic to come back that night and try his new menu.

Carl gets into a fight with Riva who wants him to cook the favorites again because the restaurant will be packed. Riva is woefully out of touch, not quite getting that the only reason they have a packed house is the Twitter controversy and that Carl has in effect promised the critic an amazing and different experience. When Riva refuses to give him creative freedom Carl quits. He comes back that evening after the critic tweets another negative remark. Carl's tantrum is captured on smartphone cameras, goes viral and renders him unemployable.

The remainder of the movie is about Carl finding his way back to the things he loves with a Cuban sandwiches food truck that he makes a success with the help of Percy and his loyal friend Martin (John Leguizamo).

Chef is a nice contrast to the typical bloated and hackneyed blockbusters that will be movie theater staples this summer like they are every summer. It's an earnest film, which mostly works, though it occasionally feels saccharine (e.g. when Carl or Percy tweet about the food truck and blue birds fly across the screen). Also, it's got lots of gorgeous food shots. Unlike a lot of child actors, Emjay Anthony feels natural in his role as Percy. There's an effortless quality to the rapport between Carl and Percy. The many well-known actors are quite good: Scarlett Johansson as a hostess at the restaurant, Robert Downey Jr. as Inez's first husband, and Bobby Cannavale as Tony, Carl's sous chef at the restaurant.

Pop culture right now is often awash in snark and irony. "Chef" delivers a more sincere project, even if it's basic premise is not especially original. This is a hopeful film about the compromises that creative people make when trying to produce work that lots of people will like, but that also satisfies their own creative needs.

A number of critics have noted the common arc between Jon Favreau's career and Chef Carl Casper's careers. Favreau started small and interesting with his films, and went on to make crowd-pleasing special effects blockbusters. (His acting career has been quite spotty ?Couples Retreat was one of the most embarrassingly bad movies I've ever seen.) I'm a fan of Favreau as a writer/director, but I don't follow his work on blockbusters mainly because I just don't care about special effects. His talent, as I see it, is in these naturalistic comedies that move gently between the mildly uncomfortable and the sweet. It is his success with the blockbusters that allowed him to make this independent film.

Favreau actually worked with Chef Roy Choi who owns the Kogi food truck and other Los Angeles restaurants, learning the traditional French techniques, so that he could do his own cooking "stunts." Choi oversaw the films' menus and Favreau worked on the line as part of Choi's kichen crew.

Chef is currently playing at CinéArts at Palo Alto Square.


Maybe next time a spoiler alert can be put at the top if so much of the plot will be revealed in the blog.
If a blockbuster is a crowd pleaser is it also bloated?

Couples and Premarital: How Do You Define Love?
By Chandrama Anderson | 0 comments | 2,478 views

Whoof! Our problems have all disappeared
By Diana Diamond | 9 comments | 1,118 views