﻿ Does the film adaptation of The Fault In Our Stars Get it Right? | Off Hours | Anita Felicelli | Mountain View Online |

Does the film adaptation of The Fault In Our Stars Get it Right? 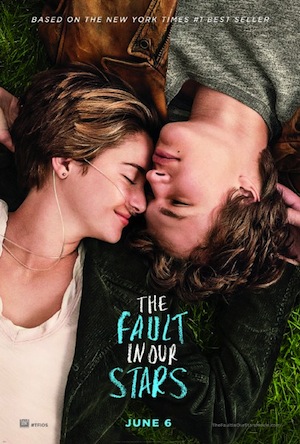 The most problematic thing about the film adaptation of The Fault in Our Stars is in its opening lines. The lines are a voiceover by Hazel Grace Lancaster (Shailene Woodley), a 16-year-old cancer patient. To badly paraphrase, she promises that the story to follow will not be an manufactured romance, but the truth. The best thing about John Green's book, in my opinion is its effortless authenticity and unvarnished emotional truths, so the opening lines seem to promise something great to those who like the book. They promise truth in the descriptions of pain both psychological and physical of dying from cancer and the truth of two complicated psyches. They promise truths about true love. They promise the movie won't be a generic kids-dying-of-cancer pic.

Although what we get is faithful to the plot of the blockbuster book (I'm sure many tweens will love this adaptation), it does not feel like the truth of two particular teen cancer patients in love as the book told it. For one thing, the two leads have the preppy shine of J. Crew models, in spite of the cannula in Hazel's nose throughout the film. As the story begins, Hazel has metastatic thyroid cancer and Gus is cancer-free after a bout with osteosarcoma that claimed one of his legs.

It is Hazel's self-aware quirkiness that makes TFIOS (the book) so appealing. There is nothing vacuous or blank slate-ish about her; she is not a grown-up's stereotype of what teenagers are like. Green doesn't pander to his readers or assume they are intellectually unsophisticated. Throughout the book, it is clear how smart, nerdy and interesting she is. And yet, in spite of Hazel's maturity, she is still sometimes a normal teenager who wants her parents to be ok after her death, but says grouchy, even mean things, when pushed.

In the movie, however, Woodley often does play Hazel as a blank slate. You can't help but like and feel for Woodley's Hazel, of course, because she's an excellent actress giving it her all playing a cancer patient. But all of Hazel's ragged edges, angles and complexity in the book are replaced by a certain generic Hollywood quality that feels intentional.

As I learned from CBS Sunday Morning's clip on John Green last Sunday, Woodley has been styled throughout the movie in accord with Green's real-life inspiration Esther Earl. She was a teenager Green knew who died of thyroid cancer several years ago. In the film, Woodley has her short hair and her girl-next-door looks. But Hazel in the book was psychologically edgier, wittier and sharper than Woodley's performance suggests. She was above all not a bland kid dying of cancer, but a very specific one with interesting tastes and turns of phrase.

Several critics have noted Elgort is in over his head in the role of Gus. Gus wants to be remembered by millions?he wants things in the world to mean something, he fears oblivion. He likes metaphors. But in addition to being witty, deep and romantic, Gus is also supposed to be a hot and cocky 18-year-old ex-basketball player and the latter is how Elgort plays him. Part of the problem with Elgort in the film is actually one of make-up, not acting?he has glowing skin and he simply looks too healthy. The depth falls by the wayside a bit, but in his appeal to type rather than specificity, he fits with Woodley's performance and they do have chemistry. A number of comparisons have been made between TFIOS and Erich Segal's adapted hit Love Story?Elgort plays Augustus slickly, a little bit like Ryan O'Neal played Oliver Barrett IV.

A preoccupation with finding meaning in the face of death makes the novel interesting in spite of its central premise. Thankfully, even though the characters have been rendered generic, the movie keeps some of this interesting intellectual engagement, probably because the plot completely hinges on this engagement. The main plot of TFIOS turns on Hazel's favorite book, a cancer book called An Imperial Affliction. She shares the book with Augustus at the start of their relationship.

An Imperial Affliction ends mid-sentence, as the late great writer David Foster Wallace's first novel did. The fact that the book stops mid-sentence is one of a series of allusions in TFIOS to Wallace, as well as the themes of many of his writings (including his famous Kenyon commencement speech). And interestingly, the author of the fictional novel, Peter Van Houten (Willem Dafoe), turns out to be a troubled alcoholic with an interest in thought experiments and philosophy, as Wallace was. Hazel wants know what happened to the other characters after the main character died in her book, and tries to get answers from Van Houten.

The scriptwriters are the same ones who wrote last year's The Spectacular Now (which I have raved about before) and what they have written is a reasonably smart, capable script. All its best lines are from Green's book. Green consulted on the film. The movie is a romantic tearjerker that elicited tears from me and lots of others in the theater. But the film doesn't quite manage to convey why the book was so astonishingly good. Why it is has an overwhelming number of fans, both young and older. Somehow, a scene in the Anne Frank house in Amsterdam that works fine in the context of the book?because the book stresses the philosophy that all we have is our ordinary lives now, in this moment, not whether history remembers us? seems unduly manipulative and a little cheap, possibly taken out of that philosophical context.

Nonetheless, I enjoyed the adaptation of The Fault in Our Stars?at least I did while I was watching it, before I gave it additional thought?and no doubt many people will enjoy it more than I did. But unless you are already an ardent fan of the book and therefore feel a strong urge to see the movie, the book is more worthwhile (and also cheaper) than seeing the movie right now in the theaters.

Have you read the book or seen the movie? What did you think?


Yes, TFIOS got it right. as pediatric oncologist, i knew kids like Gus and Hazel and was touched by their ability to face their mortality at an age when most people are contemplating what to do on Saturday night. it's not fair to compare the book to the movie since the movie gets less than 2 hours to tell their story, but if more people hear the story because it's a movie, the world will be a better place.


Thanks for sharing your insight, queen of zen.


please don't bore me with this kind of a movie. where is there a storyline or plot? just looking at people talking to each other. give me a break. no, this doesn't do justice to this writing. audiences deserve much better than this

Couples and Premarital: How Do You Define Love?
By Chandrama Anderson | 0 comments | 2,480 views

Whoof! Our problems have all disappeared
By Diana Diamond | 9 comments | 1,126 views