﻿ Can a Song Save Your Life? | Off Hours | Anita Felicelli | Mountain View Online |

Can a Song Save Your Life? 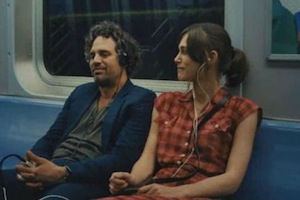 Can a Song Save Your Life? was the original title of Begin Again, a fun indie quasi-romance written and directed by John Carney, who also made the 2007 musical Irish film Once starring Glen Hansard and Markéta Irglová. Fans of Once will recognize certain elements of the film in the glossier and more commercial Begin Again.

An idealistic and uncompromising British singer-songwriter Greta (Keira Knightley) happens to be singing and playing guitar at a bar's Open Mic night after discovering that her boyfriend, a musician whose star is rising, cheated on her. The boyfriend amiably performed by Adam Levine, the lead singer for Maroon 5.

Also at the bar is Dan Mulligan (Mark Ruffalo), a scruffy, temporarily down-on-his-luck music executive at Distressed Records. Dan is an alcoholic who is separated from his wife Miriam, a music journalist (Catherine Keener) and his daughter Violet (Hailee Steinfeld). Through a long flashback, we learn Dan just got fired by his former partner Saul (Yasiin Bey formerly known as Mos Def). Worse, it happened in front of Violet, who Dan takes to a bar so that he can get more drunk.

After he drops Violet off, Dan winds up at the Open Mic. Most of the bar's patrons are slightly bored through the songs, but Dan is captivated by Greta's song and he (literally) hears the accompaniment of instruments that nobody else does. He wants to sign her and make her over into a Norah Jones or possibly a Deborah Harry.

If you've seen Once, you'll recognize some common elements between the movies: the girl who changes the guy and connects with his family, the passion for music. Dan notes in Begin Again that music can transform even the most banal scene into something magical and that is true for both films.

For my tastes, Once was a slightly better movie. Its songs are better?I'd be surprised if Begin Again wound up becoming a Tony-winning musical as Once has. (Incidentally, Once, the Broadway musical version is currently running at the Curran Theater in San Francisco.) My husband and I listen to the soundtrack regularly. However, Keira Knightley has a pretty, lilting voice that is well-suited to the semi-pop songs?they are songs that people who like Norah Jones would like.

I enjoyed the music and the conceit behind the second half of the demo she and Dan record in hopes of getting his former label to sign her: they record outdoors in different locations around New York City with ambient sound?the subway, a rooftop, an alleyway, on boats in Central Park.

Like Chef, Begin Again has a fairy tale feel. It's about what happens when talented people stop caring what other people think and collaborate on a creative project that they truly believe in. But it has just enough bitter mixed with the sparkly-sweet vibe to put the movie a notch above most romantic films.


Here's the answer to your question:
Web Link


it definitely can, check out Web Link

Couples and Premarital: How Do You Define Love?
By Chandrama Anderson | 0 comments | 2,474 views

Whoof! Our problems have all disappeared
By Diana Diamond | 9 comments | 1,094 views