Uploaded: Sep 29, 2014
Is it a challenge to keep your phone or tablet charged? Apple claims you get up to 10 hours Internet use on an iPhone 6 and up to 12 hours on an iPhone 6 using the phone network. My biggest disappointment with my iPhone 6, otherwise a fine device, supporting nearly 500 apps, is that the phone won't last a day without recharging. Another iPhone problem is that the battery is not easily replaced by the user. The iPhone 6 offers an 1810mAh battery, according to macrumors.com. I'd prefer a fatter phone with twice the battery. My Kindle HD turns itself on when charging. Background apps and ads run down the battery. When charging is finished, I shut it off entirely, else it will be out of power in two days.

Will your car charger work? I recently bought an Enercell car charger from Radio Shack. Unfortunately the lightning connector was a tiny bit fatter than that on Apple's charging cord and it didn't plug in to the iPhone when protected with a sturdy Otter case. So I shaved the plastic at the sides of the connector on a cheese grater, and it plugged in snugly.

What do you do when you are away from a power supply? On a long bike ride I've tried using solar panels to charge my phone. However, my ancient 2000 milliamp hour (mAh) panel takes about 9 hours to charge and then 4 hours to charge a phone. On a trek, it was easier to charge solar panels in advance in a hotel and forget about the sun, using them like external power packs. It may just be easier to leave home without your phone and get off the grid.

Save your phone from running out of power by turning down the brightness and turning on Airplane Mode, or at least turning off Bluetooth and WiFi when not in use. Most usefully, I've enjoyed using a couple of external battery packs from Mophie on my old cellphone. They protect the connector, which can be the first part of a phone to fail, and provide extra juice. Their tough shell protects both phone case and screen. Mophie has yet to release it's iPhone 6 battery packs, but like many other manufacturers it offers external batteries.

What do you do if you are constantly on the road? Industrial designer John Whaley recently designed and launched a Kickstarter campaign for his second backpack, the Soot Electropack Two, which features a modular design and built-in chargers. In three weeks he organized manufacturing in Mexico, suppliers from various countries including China, started his Kickstarter campaign and developed a design. I asked John why he didn't just put an external charging pack in a backpack. He explained that the convenience of a built-in charging pack is that you never forget it and the connectors for devices are on the outside of the pack. Also the pack has pockets specifically designed for laptop, tablet, phone and mobile office supplies. The pack is modular. There's a backpack with zipper attached messenger bag. The main pack and messenger bag each provide 10000 mAh power supplies. 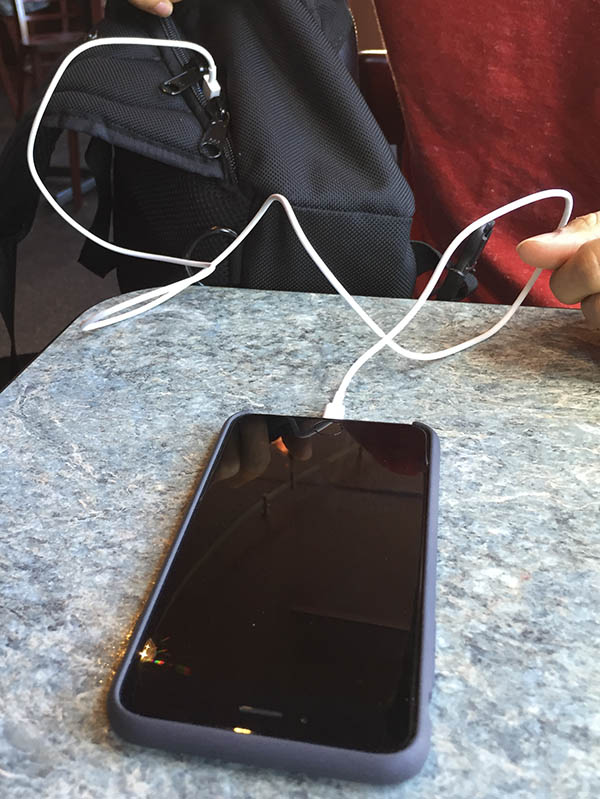 Charging a phone from a SOOT Electropack

How do you keep wires under control? You probably charge your electric toothbrush wirelessly using magnetic inductance technology. You might use a power mat. The Alliance for Wireless Power (A4WP) has grown to over 100 member companies in two years and is promoting the Rezence wireless charging standard. Rezence uses magnetic resonance with Bluetooth technology and supports devices with different power requirements simultaneously.

Intel, an A4WP member, demonstrated a wireless charging bowl at the Consumer Electronics Show last January. The idea being you toss phones into it at the end of the day and by morning they are charged. After the CES show Intel's CEO, Brian Krzanich, received more emails asking for the bowl than for anything else. At the recent New York Maker Faire, he explained development of the bowl that started when a female employee said she threw her jewelry into a bowl at the end of the day. A prototype was built by winding wires round a Walmart bowl. It worked. Later a 3D printer helped build a bowl in 4 parts. Intel says the bowl will be on the market by year end.

Let's not forget electricity is a limited resource and sometimes the best solution for charging problems is to switch off completely.

They sell a $20 charger now. Works like a portable USB port.

Report Objectionable Content
Posted by MiguNupboure, a resident of another community,
on Sep 26, 2017 at 5:37 pm

Some of the best jobs around
By Sherry Listgarten | 5 comments | 3,643 views

Fewer Michelin stars awarded on the Peninsula this year
By The Peninsula Foodist | 7 comments | 3,153 views

People and Relationships Never Stop Being a Work in Progress
By Chandrama Anderson | 3 comments | 2,078 views