Safety and Service Will Rely On Robots

Uploaded: Nov 6, 2014
Tonight outside Microsoft's Building 1 a couple of robots were gliding around, like daleks from the first episode of Dr Who. Inside were a couple of security guards. I wonder if they will ever be replaced by the robots, one attendee suggested at an event hosted by Tech In Motion.

Knightscope is a Mountain View company that is making the K5 Autonomous Data Machine to keep us safe. William Santana Li, chairman and CEO of Knightscope gained his experience with Ford Motor Company then took the entrepreneurial route, leading vehicle startups.

After 9/11 he realized security was a huge problem and founded Knightscope. He claims the US spends $840B on defense, law enforcement and security. Local & state police forces only account for $60B. G4S the world's largest security company has over 650,000 employees and over $11B in revenue. Security is ripe for automation. On announcing the robots, Li has been inundated with interest from the wide variety of organizations that use security guards, ranging from schools to shopping malls. He wants to cut crime by 50% which could result in house price increases, lower insurance costs and safer neighborhoods. 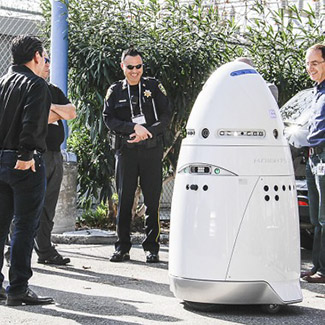 Define an area where a wheelchair could be pushed and the robots will look and listen for security hazards. They can also detect chemicals. When they hear noises like gunfire and breaking glass they can send out alerts and take pictures. In particular, they can recognize license plates and then a server can match the license plate number to a database of felons, using government data. In fact, there are over 100 government databases that help the robots analyze hazardous situations. The robots are able to find their own charging pads and recharge automatically.

Following a presentation from Knightscope, French company Aldebaran, with 1000 employees, spoke about their family of three robots. Softbank Group owns 78.5% of Aldebaran, who wants robots to be friends. Their smallest robot NAO costs $8000 ($6000 for developers) and is designed to help children do their homework. It can teach children to dance as it waves its arms and balances on its two legs. Schools use NAO as a platform to teach software engineering. It is also useful to entertain lonely folk, as a friend and it can watch the elderly. 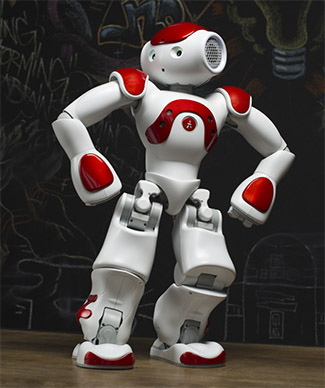 The European Community funded research on a person-sized robot, Romeo. The few Romeo prototypes can carry trays, open doors and climb stairs. A new robot, based on the same proprietary platform as NAO, for consumers is in the works. NAO reminds me of Sony's AlBO ERS-7 robotic dog, discontinued in March 2013. Nao, being humanoid has more degrees of freedom than Sony's dog and is more sophisticated.

Japanese company SoftBank Mobile partnered with Aldebaran to create Pepper, a child-sized robot for Japanese stores. It can help shoppers find goods and inspire them to spend. According to Aldebaran, in the 5 months the robots have been deployed, a typical store will see sales increase by 50%. One wonders, which stores are losing as a result of this phenomenal lift in sales. 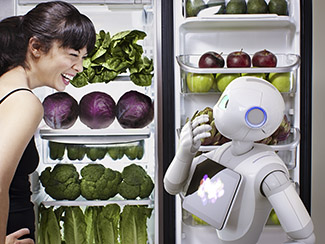 Pepper in a store. Source: Aldebaran

The final company to present, Savioke, has their SaviOne robot installed at the Aloft hotel in Cupertino. It is a pillar on wheels that delivers food, towels, small pillows and other items to hotel rooms, like a butler. When a guest requests an item, such as a bottle of water, a receptionist puts it into a box on top of the robot and its lid locks. The robot can take the elevator to a guest's room and the room phone rings. The guest opens the room door and the robot's lid opens so the guest can retrieve items. Then the robot asks for a star rating on its touch screen. At first the company made the robot depart quickly, but testing found that guests liked to see the robot and have time to interact with it. Some people, especially children, like to hug the robot. Minibars are expensive to stock as inventory has to be kept in each room and it takes time to tally the bill. These robots mean that hotels can keep drinks centrally and bring items to guest rooms as needed. The robot reminds me of an automatic mail cart we had at AT&T in the early 80s that followed a line on the carpet to travel between office cubicles. 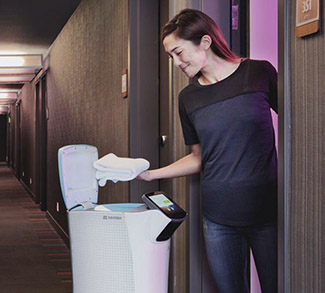 We've had industrial robots and the Roomba vacuum cleaner for years. Now, mobile technologies, such as low-powered microprocessors, sensors, tiny cameras, recognition systems and lithium-ion batteries, mean we are going to see many different types of robots in the next few years. However, Li was keen to point out that Knightscope doesn't plan to add weapons, like the dalek's exterminating lasers or Tasers, to its robots. He said if they did they'd lose trust. All three vendors believe that consumers must trust robots before they can be widely accepted.

If it can deliver beer to me, I'm all for this type of technology.

Report Objectionable Content
+   2 people like this
Posted by Angela Hey, a resident of another community,
on Nov 6, 2014 at 8:08 pm


Jay - it will deliver beer as long as someone is there at the other end to load it with your drink - for now you'll just have to spend a night at the Aloft in Cupertino.

I'll wait. No rush to be an "early adopter" of this technology.

But thanks for the heads-up!

Dehydrating for Backpacking and Camping
By Laura Stec | 2 comments | 1,388 views