Owner Jacquetta Lannan, a lawyer by training, took over the space at 415 California Ave. (the former home of Know Knew Books) in September 2013. She said at the time she'd be open in December or January.

But being a first-time owner navigating a notoriously difficult restaurant-opening process, it took much longer. Along the way, Lannan launched a food truck to get her dogs out in the world sooner than the brick-and-mortar would allow.

But now, the restaurant is open (lunch only until the end of the month) and slinging a lineup of high-end hot dogs. 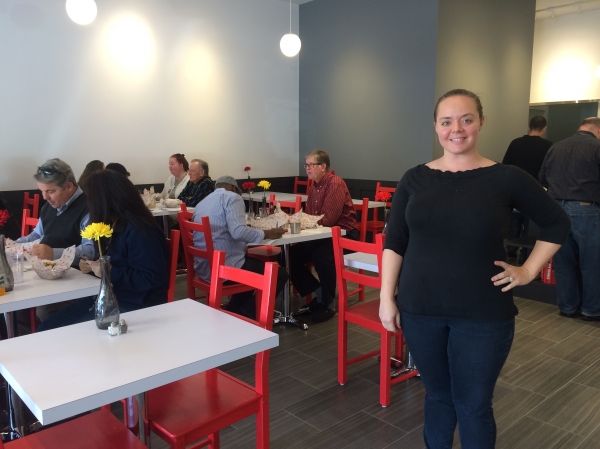 There are nine francs on the opening menu, from the more classic "All-American" (Lannan's take on a chili cheese dog) to the "Fall" franc (all-beef frankfurter, sausage velouté sauce, butternut squash hash, maple mustard, scallion and sage). Dogs range in price from $12 to $15 and come with fries, salad or slaw. Most are all-beef frankfurters, though garlic sausage and bratwurst also make an appearance.

Three soups are on the menu right now -- chili, vegan winter vegetable and tomato -- though the winter vegetable will soon change, Lannan said (though it will remain a vegan option). Soups are $7 to $9.

Dan Sung, a longtime sous chef at The Village Pub in Woodside, is heading the Chez Franc kitchen.

There's also wine and soda; beer is on its way this week.

Chez Franc will be open for lunch, 11 a.m. to 2 p.m., until the end of the month. Lannan plans to add dinner service Tuesdays through Saturdays in February. (Beyond that might be brunch on the weekends -- "phase three," Lannan said.)

"Along the way, there were lots of days when I wanted to throw in the towel and my friends and my husband would say, 'As soon as people start walking in the door, it's all going to be worth it,'" Lannan said. "And they were all right. I am having the time of my life."

I tried a hot dog with burrata from their truck, and it was pretty great. I'm looking forward to trying their restaurant.

Report Objectionable Content
Posted by andrew rich, a resident of Woodland Ave. area (East Palo Alto),
on Jan 12, 2015 at 11:07 am
andrew rich is a registered user.


The Mary's Fried Chicken sandwich sounds promising. I wish they had some chicken or turkey dogs.

Report Objectionable Content
Posted by sounds good, a resident of Evergreen Park,
on Jan 12, 2015 at 4:47 pm


It's great to see a new, independent business on Cal Ave. Although I'm not really into sausages, the veggie option sound delicious IMO. I will certainly stop by soon and wish the new owner all the best.


I'm happy to hear about the restaurant. I'm sad to hear that the government slowed down the opening process by a factor of 5, making it take a year longer. Did the community get any real benefit from this delay, which must have been extremely expensive for the business?

It is unlikely we will never know the full reasons for the delay, especially not through the media.

That said her original timetable of opening in a few months was ludicrous considering the fact that the property was host to a business that was not a restaurant operation. It might take an experience restaurateur a few months to transition an existing restaurant to a new operation if any sort of remodeling is undertaken.

What happens if she picked an interior designer and general contractor who had no previous restaurant construction experience? More delays caused by building code/health code violations.

Maybe she decides to save a few hundred dollars by picking up a used refrigerator on eBay/Craigslist, not knowing that the fact that the unit is not approved for commercial use is a showstopper and the health inspector won't even step through the front door until she can provide a list of commercially approved fixtures.

Maybe the interior designer bungles the plans and neglects to put in all the ADA compliance items, things like a wheelchair high desk/writing platform at the cash register.

There's myriad details that can easy escape the eye of a restaurant developer with zero experience.

Remember, basically speaking, the building code and health regulations are there for the safety of both patrons and staff. If it's properly implemented, you shouldn't notice it. It's just like any other restaurant operation. However, if it's not there, the venue is insufficiently equipped for its purposes to serve the public food. In this fact, yes, the public does see a benefit from the delay in that it requires the proprietor to make the necessary changes to bring the safety level to the minimum levels established for this type of business.

Yes, the protracted development time was costly for Lannan, but her original estimate to open was unrealistic. Worse, if she had picked the wrong construction partners or made preventable errors, she contributed herself to the delay.

Again, an experienced restaurateur would know this stuff, that's why they tend to purchase existing restaurant operations because they know a conversion from a retail space to a restaurant is a costly venture. For an informal hot dog restaurant, I'm not sure the capital outlay is worth it, especially in an expensive town like Palo Alto. A more savvy restaurateur might have just waited for a restaurant vacancy (like Cho's) and move in quickly (a couple of months or less) rather than undergo a year-long ordeal at enormous expense.

Anyhow, I wish Lannan and her team the best of luck.

Report Objectionable Content
Posted by Elena Kadvany, a resident of another community,
on Jan 13, 2015 at 9:31 am


Thanks to Jay Park for answering Joseph's question. There are a myriad of challenges that face anyone opening a restaurant anywhere, though many -- both first-time restaurateurs and veterans -- say that Palo Alto is particularly difficult. (Though, as Jay describes, there are many, many things that happen during the process that are beyond the city's control.)

However, the city has made big efforts in recent years to streamline its permitting and building processes. For more on that, read a story I wrote last year ("Key ingredient for opening a restaurant in Palo Alto? Patience."): Web Link

Report Objectionable Content
Posted by Joseph E. Davis, a resident of Woodside: Emerald Hills,
on Jan 13, 2015 at 11:13 am


Thank you for the explanation. I must say, though, that it certainly boggles the mind that a project to convert retail to restaurant would routinely take a year or more. I find it very hard to believe that we as a society are overall benefiting from this process.

That's the nature of the world we live in today.

The people who write these laws/code/regulations believe they are doing the public a favor by enforcing higher levels of health levels and food handling practices. This is not just about the customer, it is also about providing a safe environment for employees.

The end result is that there is a more stringent code which requires a lengthier approval process.

Conversion of a non-restaurant space is time-consuming and costly because of these additional safeguards and regulations that must be put into place. Bookstore employees aren't handling raw ingredients, there's little risk of transmitting food-borne illnesses.

An existing restaurant has most of the features necessary and might even have the right fixtures (refrigerators, stoves, sinks, etc.) suitable for commercial food preparation and storage. All of this speeds up the opening for the new owner.

I don't know if Chez Franc is doing their own butchering on the premises, but if so, then there are additional regulations that the business must comply with, much like places that manufacture their own ice cream have their own set of regulations (as both the processing of raw meat and raw dairy can result in serious illness if done incorrectly).

The craziest thing is that Lannan thought her purchase date of September would result in a December/January opening. You can't just drive over to Home Depot or Ikea, plop in a sink, counter, stove, fridge, throw up a "now hiring" sign and say "my restaurant is ready to open."

Your electrical panel is woefully underspec-ed for what a restaurant's needs are, the bookstore had no natural gas lines, there's no plumbing to where you want the kitchen, you need to build an ADA-compliant bathroom. The kitchen sink you want is back ordered, someone has to lay the tile, the walk-in fridge won't hold a temperature. You decide to move the dishwasher and now there's no 208V electricity nor plumbing in the new location. You want to replace the commercial fluorescent tube lighting with low-voltage halogen spot lighting. The inspector makes periodic visits to make sure the construction is within regulation (would you like to wait to the end and rip out 90% because you messed up the electrical?). Stuff like that.

Report Objectionable Content
Posted by Carla, a resident of Downtown North,
on Jan 13, 2015 at 2:26 pm
Carla is a registered user.


I'm siding with Jay Park. It is too easy to blame the government for all your problems. Construction projects are often delayed because they are complicated in every respect, and people who undertake them are sometimes not experienced. Add food, and you've more requirements to deal with. The government is not there to make your life easier; it is there to tell you what you can and cannot do. It is your job to be maximally informed to make things go faster and cost you less.

Report Objectionable Content
Posted by Uncle Frank, a resident of another community,
on Jan 18, 2015 at 3:27 pm

That's why I like Harry's Hofbrau in Redwood City.


Report Objectionable Content
Posted by Sparty, a resident of another community,
on Feb 5, 2015 at 3:58 am
Sparty is a registered user.


That was an awfully long and speculative post up there.

Anyone could see on their facebook page that they *had* a dishwasher right next to a food prep area.

State Street Market plans overhaul of its eateries as it cuts ties with Bon Appétit, triggering layoffs
By The Peninsula Foodist | 11 comments | 3,744 views

Doing more with the natural spaces we have
By Sherry Listgarten | 6 comments | 2,257 views