Uploaded: Jun 17, 2015
Starbucks announced Tuesday that it will be closing all of its 23 La Boulange locations, including one in downtown Palo Alto, describing the cafes as "not sustainable for the company's long-term growth."

Starbucks acquired La Boulange, then a San Francisco-based patisserie and café chain, in 2012 for $100 million. The Palo Alto location opened the same year at 151 University Ave., a prime downtown corner with a large outdoor patio. 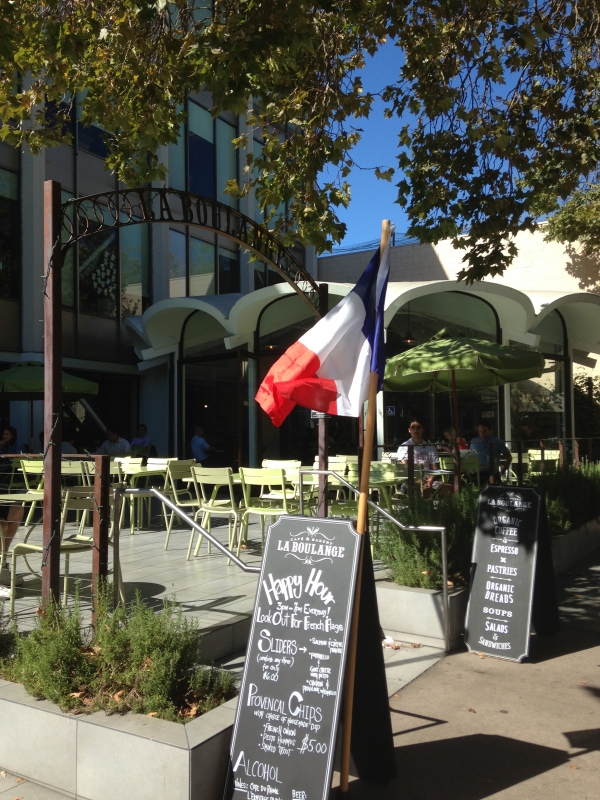 The closest Peninsula location is in Burlingame; most locations are concentrated in San Francisco, with a few in the East Bay and Marin as well.

Since "food is a key element of Starbucks growth strategy," the company will continue to sell La Boulange items in its stores, but the stand-alone cafes and the two manufacturing facilities that serve those locations will be shuttered by the end of September, Starbucks said in a statement. The manager of the Palo Alto cafe said the location will be closed Sept. 25 and declined to comment further.

Starbucks said that La Boulange employees "are being treated with the utmost care" and when possible, will be placed at a Starbucks in the area.

"Starbucks goals to grow its food business and deliver an incremental $2 billion in the next five years in the U.S. are unchanged," the company statement reads. "Starbucks will continue to deepen its commitment to customers' food experience in stores, ensuring it surpasses their expectations, just as the company has done with coffee and beverages."

andrew rich is a registered user.

Report Objectionable Content
Posted by Mike Keenly, a resident of Menlo Park: Allied Arts/Stanford Park,
on Jun 17, 2015 at 10:58 am

Le Boulange turned an awkward space into something really nice. I'll also miss the food, which is a big step above their offerings at Starbucks.

Report Objectionable Content
Posted by Starbucks is the devil, a resident of Downtown North,
on Jun 17, 2015 at 11:43 am


Just a coincidence that Starbucks has a satanist logo? I think not.

SITD, starbucks does not have a satanic logo. This isn't the 90s.

Report Objectionable Content
Posted by SteveU, a resident of Barron Park,
on Jun 17, 2015 at 12:10 pm
SteveU is a registered user.


I've used the ones in Mt View and Cupertino (Possibly before Starbucks).
I figured they bought them for the Bakery goods and the Food part was a bonus without tampering with the Starbucks branded locations.

Report Objectionable Content
Posted by chris, a resident of University South,
on Jun 17, 2015 at 12:36 pm


What are the chances that the Palo Alto space remains a cafe?

Does this space have to remain retail?


Terrible news. While I like Starbucks, Boukange is a class act.

Report Objectionable Content
Posted by Reader, a resident of another community,
on Jun 17, 2015 at 2:49 pm

Based on recent public outcry over the steady loss of downtown retail, my guess is that it would be challenging -- but not impossible -- for a developer to convert the La Boulange site into office space.

"What are the chances that the Palo Alto space remains a cafe?"

"Does this space have to remain retail?"

Nope. My estimate is maybe 60% chance of it remaining retail. Of course, those are my personal guesses without any hard basis.

The City of Palo is perfectly capable of kowtowing to the whims and desires of developers and letting this be converted into office space.

Report Objectionable Content
Posted by michelle, a resident of Crescent Park,
on Jun 17, 2015 at 3:39 pm


La Boulange is another Starbucks casualty a la Torrefazione Italia in 2005. Same takeover, same number of cafes, and same excuse for closing them. I am certain their finance team knew the state of the finances before they were acquired. La Boulange did change its colors overnight.

Closing them is a blatent strategy of killing the competition while it is nascent.

Report Objectionable Content
Posted by michelle, a resident of Crescent Park,
on Jun 17, 2015 at 3:39 pm


La Boulange is another Starbucks casualty a la Torrefazione Italia in 2005. Same takeover, same number of cafes, and same excuse for closing them. I am certain their finance team knew the state of the finances before they were acquired. La Boulange did change its colors overnight.

Closing them is a blatent strategy of killing the competition while it is nascent.


Jeez! You guys need to broaden your horizons. There are more coffee shops than Starbucks. Their coffe is terrible!!! Contribute to a local business owner.

Report Objectionable Content
Posted by Reader, a resident of another community,
on Jun 17, 2015 at 7:06 pm

The people who go to Peet's and Starbucks today are mass market consumers. Both coffee shops started as high-quality mom-and-pop artisan cafes.

Starbucks -- more than Peet's -- has degraded into a very pedestrian chain. That was part of the failure of the assimilation of La Boulange into the Starbucks empire. Starbucks bought La Boulange in the hopes to upgrade their food offerings, but many complained about the smaller items and higher prices, so Starbucks eventually relented and returned some discontinued items back to the food menu.

If you care about coffee, you'd be patronizing one of the independent shops. Twenty years ago, it might have been Caffe Verona (where Reposado now operates). Today, it might be Coupa, Venezia, Blue Bottle, etc. Even Philz is within walking distance.

I never did get the appeal of La Boulange. I tasted their baked goods early on (the Pacific Heights store in SF) when they were just developing the "La Boulange" brand (originally Bay Bread), and I thought their items were very ordinary (the Gallic-styled retail experience was the only differentiator, but that never justified the prices). Even their loaves were practically inedible the following day, whereas a well-baked bread (like Acme) could easily last several days.

Pascal Rigo is a genius. He produced mediocre baked goods, priced them high, sold them in ersatz retail stores, and started pouring forgettable coffee. His original bakery stores made little attempt at being coffee shops. He basically sold a bunch of mediocre recipes and a handful of commercial properties to Starbucks for $100 million. Brilliant.

Some day, in the not too distance future, someone else like Rigo will come along and do the whole thing again.


Whoa, scared me. For a moment there I thought it was LeBoulanger that was closing its locations. That would have been a major disappointment.

Report Objectionable Content
Posted by Georgia, a resident of Professorville,
on Jun 21, 2015 at 5:35 pm

Report Objectionable Content
Posted by Michelle, a resident of Duveneck/St. Francis,
on Jun 22, 2015 at 1:36 pm


It is too bad that Starbucks couldn't live with a much better local private chain. La Boulange food and coffee is so good!!

The only way for Starbucks was to buy them out and close them.

Let's stay away from Starbucks to show our support with smaller and better local chains.

Report Objectionable Content
Posted by Kazu, a resident of Downtown North,
on Jun 23, 2015 at 9:23 pm


"Jeez! You guys need to broaden your horizons. There are more coffee shops than Starbucks. Their coffe is terrible!!! Contribute to a local business owner."

Aren't the franchisees local business owners? But I get your point, and think it is a shame that La Boulange is closing. Not to worry, though, as we still have:

and these, if they count:

With these two, who needs anything else?

Report Objectionable Content
Posted by Slow Down, a resident of Community Center,
on Jun 23, 2015 at 9:46 pm
Slow Down is a registered user.

Report Objectionable Content
Posted by Geek, a resident of Sylvan Park,
on Jun 24, 2015 at 8:32 am
Geek is a registered user.


As long as cheese danish is still there, I'm OK.


I\'m fine with them closing. I thought their food was "ok" and really only ever bought pastries. I would love to see a new, better local coffee shop in its place. Has anyone been to Rapha in SF in the Marina? I feel like that would do well in Palo Alto and their coffee (Four Barrel) and food selections from local bakeries is wonderful.