We Sushi food truck to open restaurant in Menlo Park

Uploaded: Jul 17, 2015
Editor's note: This story was updated to correct the owner's last name, which is Wu, not Yu.

We Sushi, which claims to be the Bay Area's first sushi food truck, is opening a brick-and-mortar Japanese restaurant on Santa Cruz Avenue in downtown Menlo Park this fall.

Owner Thomas Wu snagged the lease at 605 Santa Cruz Ave. after Tokyo Subway closed in December. The Japanese restaurant had been a downtown staple for 30 years.

Wu said the new restaurant, Kyosho Japanese Restaurant, is a return to roots for him. Wu has been a sushi chef for more than a decade. Before starting his food truck, he worked in both fine-dining restaurants, including Ozumo in San Francisco, and more casual family style establishments. Kyosho will be somewhere in between: "a modern while local-friendly restaurant," Wu wrote in an email.

"One of the things I enjoy most, but couldn't find working in a truck, is the constant interaction and real face time with my customers," he added. "I love to be able to return to that experience when working behind a sushi bar."

Wu, who described himself as an entrepreneur at heart, opened We Sushi in 2011. The concept of eating sushi from a food truck was not new, he said, but he was the first to do it in the Bay Area. We Sushi is now a frequent presence at Bay Area food-truck gatherings like Off the Grid (including Palo Alto's on Monday nights) and Moveable Feast.

"Sushi experience should not be limited to a sushi bar or fancy restaurant," the truck's website reads. "It can be wherever you are -- around the corner of your office, your home, or your favorite park!" 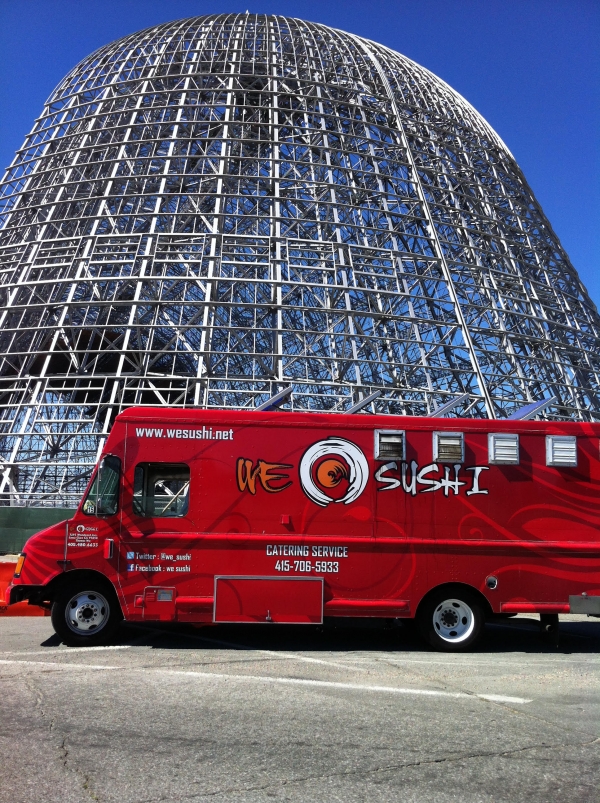 The We Sushi menu includes both traditional and more fusion-forward items. There are Bento boxes, a lightly fried spicy tuna roll and the "Lobster Crunch" (lobster salad wrapped in soy-paper with cucumber, avocado and a light wasabi dressing as well as sushi burritos.

We Sushi's fish is hand-selected from local and global markets every morning "to guarantee freshness and the best of the season," and the chefs use sustainable and organic ingredients as much as possible, according to the truck's website. All sauces are made in-house.

Kyosho won't be as casual as the truck, Wu said. In his years driving the food truck all around the Bay Area, he said he got to know many local markets and felt he fit in on the Peninsula the best.

And the meaning of the restaurant name? "Kyosho means artisan, one who has fine skills in his field of expertise," Wu said "That's what I am hoping to become."

Wu is aiming to open sometime this fall. Stay tuned for updates.

I wish him luck, but I have to say that I really hate this "fusion sushi" stuff. Covering expensive fresh fish with oil and sauce destroys the flavor of the fish. What's the point, unless you hate fish to begin with?

Report Objectionable Content
Posted by Reader, a resident of another community,
on Jul 17, 2015 at 1:59 pm


Well, most gaijin don't even realize that the word "sushi" refers to the rice not the fish, so weird, spicy "fusion sushi" drowning in oil, sauces, whatever should be right in their wheelhouse. They're easy to identify: they're the ones putting massive gobs of wasabi in their soy sauce.

Anyhow, best of luck to Mr. Yu in his new endeavor.


Hey "Reader" & "resident", how about trying to be less pretentious and condescending, and be more excited and supportive about seeing another restaurant coming in to downtown.


Congratulations to Mr. Yu! It's exciting to see new ideas start out as food truck and move up to restaurants. I hope you can last as long as Tokyo Subway did.


This is great! Look forward to going there and thanks to Mr. Yu for taking over another vacant space in sleepy Menlo Park. Maybe sometime in the not too distant future we won't be so sleepy!


I just noticed that this article was posted two years ago. I just noticed the sugn in the lication's window this month June 2017 - does anyone know if or when it will open?

Report Objectionable Content
Posted by Elena Kadvany, a resident of another community,
on Jun 29, 2017 at 8:08 am


Hi Marjorie: I just checked in with the owner about this last week and he said he hopes to soft open in a few weeks. Stay tuned!

State Street Market plans overhaul of its eateries as it cuts ties with Bon Appétit, triggering layoffs
By The Peninsula Foodist | 11 comments | 3,993 views

Doing more with the natural spaces we have
By Sherry Listgarten | 6 comments | 2,562 views