King, who has been at the helm of the to-go outpost as well as a now-shuttered sit-down restaurant for more than three decades, has decided to retire. After 38 years and working seven days a week, she feels it's time to "reserve some time" for herself, she said.

King sold the Menlo Avenue restaurant to a longtime local restaurant owner, Jason Kwan, who will keep the venerable Su Hong menu but change the name to Chef Kwan's. 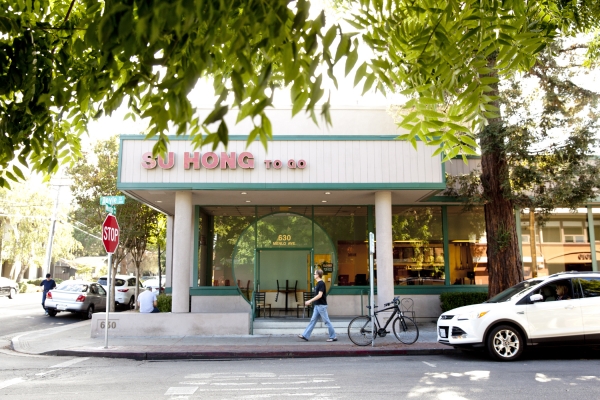 Su Hong under King's ownership and the original name will cease to exist at the end of the month on Wednesday, Sept. 30. King said two longtime managers are also retiring. Most employees will stay on with the new owner, King said.

King said the decision was an emotional one, and leaving the generations of regular customers feels like saying goodbye to an "old friend."

"I remember a long time ago when the little customers, like 5 years old (came in) … now they bring their own 5 year olds to have our food," she said. "It's like an old friend. I miss them a lot."

She said some customers have cried after hearing the news this week. She's also received numerous calls since posting a message about the ownership change in the restaurant just yesterday, Sept. 27. 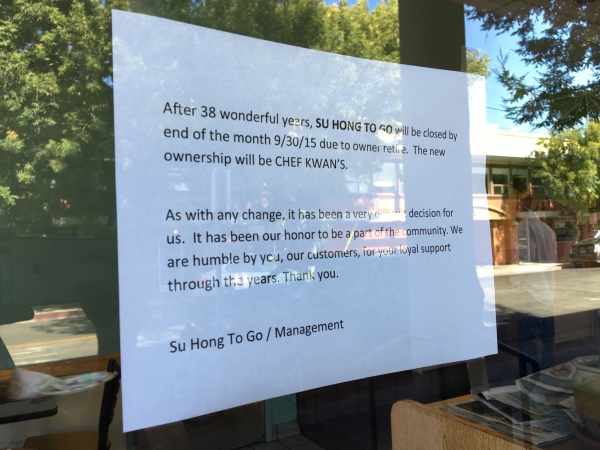 The sit-down Su Hong restaurant first opened at 1039 El Camino Real in 1977. Five years later, another location opened in Palo Alto, which is still in operation though under independent ownership.

Su Hong To Go opened at 630 Menlo Ave. in 1991 "to serve the ever-increasing number of repeat customers with to-go orders," the restaurant's website reads.

The sit-down restaurant suddenly closed for remodeling in 2012 and never reopened, bringing much traffic to the to-go location about a block away. King said that Kwan will also take over the original El Camino Real space and possibly open a dim-sum restaurant there. A fictitious business name statement was filed in August for the location under the name "Yum Cha Palace." 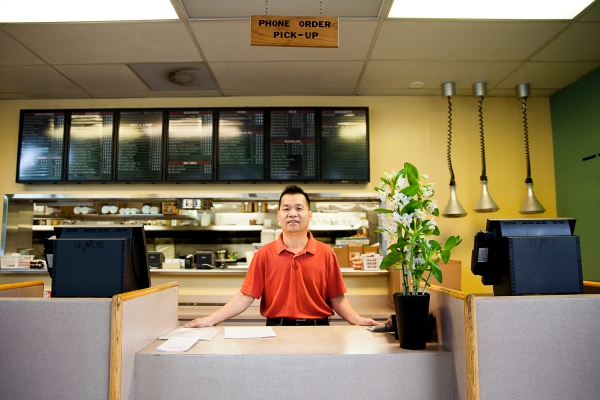 The new owner of Su Hong, Jason Kwan, in the to-go location on Menlo Avenue. Photo by Michelle Le/The Almanac.

For years, customers have repeatedly voted Su Hong as Menlo Park's "Best Chinese restaurant" in the Almanac's annual Best Of competition. Su Hong To Go won the takeout category this year. The restaurant, which serves Mandarin- and Szechwan-style food, is locally world-famous for its General's Chicken, potstickers, Chinese chicken salad and more.

Taken from Web Link "a dispute over soy sauce at Su Hong restaurant in Menlo Park, Calif. last Aug. 21, has landed the former NFL player in court after he assaulted his ex-boyfriend." This is the believed reason for "remodeling" On a side note, Menlo Park residents may care to know that the Dutch Goose and Oasis were built at the perimeter of Stanford's prior "dry campus" restriction


If I were the new owner and planned to keep the menu and operations the same, I would attempt to leverage the brand loyalty of the Su Hong name built over the past 38 years.


So sad to hear the news. I have to say we go here every Sunday and love the Chinese food. Their combo wonton soup is the best around. Even the Su HOng of Palo alto is not very good. We need to have decent chinese food. I guess I will have to go into mtn view to Chef Chus


Look, I'm going to ask the question on everyone's mind: Is this the end of general's chicken? If so, could you please post the recipe online? I honestly don't want to live in a world without general's chicken, and this terrifying distopian future is certainly not a place where I'd want to raise children of my own, should that day ever come.


general's chicken is basically the best thing that has ever happened to me. if it leaves menlo park, so do I.

Report Objectionable Content
+   3 people like this
Posted by ChoiceLess, a resident of another community,
on Sep 30, 2015 at 8:03 am


To Loyal Patron, Steve: Personally, I find Chef Chu's quite mediocre, and either bland or too salty and messy. I have tried it like 7 times in the last three years I lived in PA - because I really wanted to see what all the hoopla is about - but it is consistently unsatisfactory.


@Todd @Tom There is a humorous documentary on Netflix, The Search for General Tso or something like that about chinese american cooking in general and General Tso's Chicken in particular.


I still miss Su Hong. I used to like Chef Chu but it is not at all what it once was. The food is greasy, the place is noisy thanks to kids running every where. It won't get a visit from me so I hope, really hope, that Kwan pulls out all the stops to bring back a great Chinese restaurant to Menlo Park.


A sad day, I have been visiting this location as long as it has been around. The food was good for what it was despite fluctuations in quality. Growing up we would bike down Alameda and cross over to downtown Menlo Park to grab some lunch and bike home happy and full. Hopefully the prices do not escalate anymore than they have and lets pray the food stays the same. Its not the best but it has a familiar and comforting flavor that my friends and family grew up with.


This announcement comes as a huge surprise and hopefully, not a disappointment. We drive all the way from San Carlos to get their wonderful food. Always piping hot and always fresh! My favorite is the Chinese Chicken Salad. I have not been able to find anything like it since the Ming's restaurant days. Farewell Su Hong, you will be sorely missed.


45 minute wait tonight but the food is outstanding. I wish the family well....


Sadly, what the rest of the world (every other chinese takeout I've ever had) calls general tso's is confusingly completely different and inferior to the magic produced within the kitchens of Su Hong. It's soooooo good. I mean, right when it hits your lips. mmmmmm.


The closing of Su Hong To Go in Menlo Park is very disappointing. This was the last place my family and I could get great tasting Chinese food in the area. Su Hong Palo Alto is awful: greasy, tasteless or mostly bland, or simply not good and only getting worse. Unfortunately no similarity to the To Go restaurant at all. We've given up on all Chinese restaurants locally and they are mediocre, at best. In fact we have gave up on all local Chinese restaurants and switched to Thai restaurants, specifically Green Elephant and Rice in Palo Alto and Thai Time in Redwood City (or is it in San Carlos?). What a dearth of good Chinese food here....how sad. I can only hope that the new ownership in Menlo Park has excellent dishes as Su Hong To Go had.


Su Hong has the best Salt & Pepper fish anywhere. Every other restaurant is vastly inferior in their attempt to duplicate this dish. I've been eating at Su Hong for close to 40 years, in fact we used to take field trips there from Hillview School, and this is the most disappointing local news since Yuen Yung closed in the 80's. No other place has the same quality chow mein, fried rice, or pot stickers. Very sad to see this go. Anyplace with "Chef" in the title seems to be of poor quality...


I've been going to Sun Hong since I was a kid...so 30 plus years. There for dinner and then to Keplers to look at the books, great family tradition. So even though it's changed hands, I'm hoping that the El Camino location will open again instead of being a sad closed restaurant. Hope the new to go place does really keep the menu as is as it's a great one.


Hong Kong Restaurant on El Camino is legit, authentic food. But it is Cantonese style, so it's different from Su Hong.

Report Objectionable Content
+   4 people like this
Posted by Karen Marincovich, a resident of Another Palo Alto neighborhood,
on Oct 2, 2015 at 7:41 pm


Another try may be Mandarin Roots, newly transitioned from being Hunan Garden on El Camino, next door to the Boston Market. Simon Yuan is the owner and son to owner of Hunan Home in Los Altos. His son is running the kitchen now and a move is underway to be more creative with dishes, from the tried and true. They do still have tastes from the past, along with new renditions-they tried a shredded steamed chicken salad that I thought I'd gone to heaven on with an elegant dressing and medley of greens but I was told that the public wanted a more traditional chicken salad. The typical is dry, greasy, and not tasty, so I'm trying to convince them to change back. They'll need public swaying, so I may not get to try my favorite again, but I'll keep the faith. The wait staff are very hospitable, and I can say it's a pleasurable dining experience. The hos d'oeuvres I liken to Chinese tapas; your tastebuds will delight.


Ordered from Chef Kwans yesterday( did not know Su Hong to go was no longer) and I will never go back! No veggies in the chicken chow mein-needed a magnifying glass to find the chicken and the noodles were over cooked. Cashew Chicken was very bland and had no eye appeal to it either. Sweet sour pork also was bland and needed a magnifying glass to find the pineapple and bell pepper. The bbq pork fried rice also needed more ingredients to make it edible.


Does anyone know when Yum Cha Palace will open?


My name is David King. I think all Su Hong's customers should be familiar with that name. I am the founder of Su Hong Restaurant. I would like to point out few facts to share with my long time customers. First of all, Mr. Kwan has never worked in Su Hong, which he claimed he was the chef at Su Hong (big lies). Legally, he should not associate Su Hong's name with his new restaurant in any manor, which may result in legal action. He tried to copy Su Hong's recipes, but it lack of personalities. The only Real Su Hong left is in Palo Alto, which I built in 1987 after I left Menlo Park.

Democracy and our police departments
By Diana Diamond | 3 comments | 2,208 views

Stroll the streets of Paris on the Peninsula with Bon Marché
By The Peninsula Foodist | 2 comments | 1,919 views