There was a "bar's last day" event on Saturday, Jan. 23, according to a Facebook event. The building has been sold, owner Rahim Ahmad confirmed this week. He said he and his business partner tried to buy the building themselves but it was "a little out of our price range."

He said he heard the building would be turned into a "learning center."

The dive bar at the intersection of El Camino Real and El Camino Way had no official signage but instead, simply, images of an alcohol bottle and overflowing beer mug, plus the word "bar" painted outside: 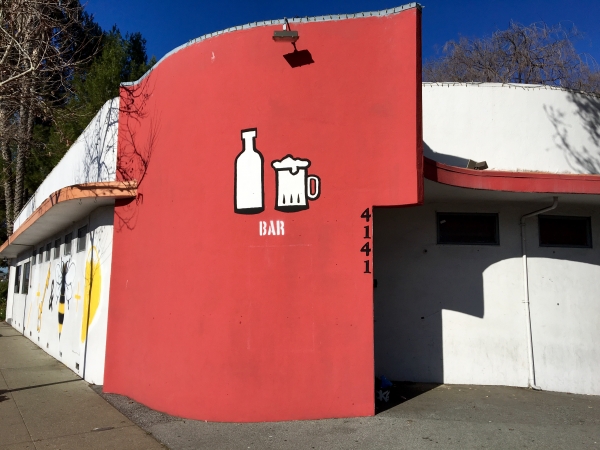 Ahmad explained the origins of the minimal signage: When he took over and was trying to open the bar, there was some protest in the neighborhood. One of his opening conditions was not having any signage. Once they were allowed to, customers liked the fact that you had to know about the bar to go, so they kept the new sign very simple.

A clever mural-pictograph was also painted along the El Camino Real side -- images of a whisk + a key + a bee + an ear (whiskey beer.) The bar’s Facebook page has a similar cover image (an eye + a heart + a bee + an ear = I love beer.)

Ahmad said the bar attracted a huge mix of patrons, from "old school" Palo Alto residents to newcomers and people visiting the area (some would come from a hotel across the street, he said).

The Facebook post claims 4141 El Camino was the site of Palo Alto’s oldest bar. Ahmad said from his understanding, the first bar to open there was George's, in 1913. It was later sold and turned into Ethan's (which he said San Francisco Chronicle columnist Herb Caen wrote about at one point), then Island Cocktail Lounge, and then Dan Brown’s Sports Bar, which closed in 2010.

I originally posted that Antonio’s Nut House on California Avenue gives the 4141 El Camino site a run for its money, but it's only been open since the 1970s. (It first opened in 1972 as the Annex and then became the Nut House in 1975, according to owner Tony Montooth.)


Sad to see it go, it was a nice place and they were good neighbors. Unfortunate it's going to be a learning center...


Yet another homey, friends-get-together location lost. Sigh. Learning center, eh? I hope that's for children and not more relatively low-paid high-tech Google workers imported from overseas on Visas. I'll trade the bar for the sake of the kids, but not for the profit-seekers. At least it's not going to become yet another "upscale" fitness center (I'm really beginning to hate that 'U' word...).


No doubt for some this place was a sort of learning center. First and only time I went there was on election night a few years ago to watch the Maybell returns. It was funky and cool and they served a good burger. I can hardly claim that I will miss it per se since I wasn't a regular patron, but it is always a little sad to lose a small business with odd charm and character.

Report Objectionable Content
+   2 people like this
Posted by whatever, a resident of Menlo Park: Central Menlo Park,
on Feb 4, 2016 at 12:28 am


Memories of cheap drinks, greasy burgers and games of pool. It was a friendly place. RIP.

Jumping on a bandwagon that ends up breaking down
By Diana Diamond | 16 comments | 2,774 views