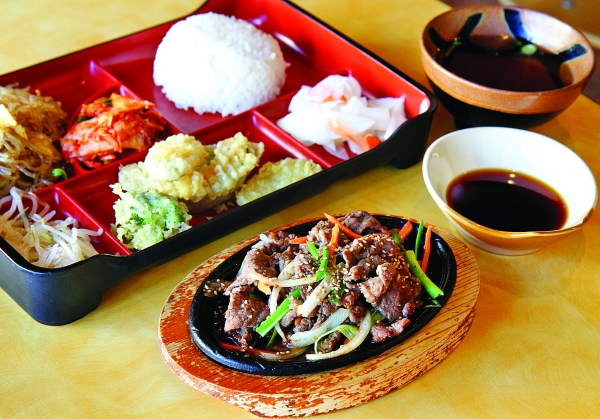 One of Totoro's bento special's was bulgogi, marinated beef with house sauce served with tempura, noodles, rice, kimchi, soup and other vegetables. Photo by Michelle Le.

A family that owned a Korean restaurant in Pleasanton called Song Pa took over the space and opened a second restaurant of the same name, owner Anna Won said Tuesday. She said she owns Song Pa with her brother and mother. The family sold the Pleasanton restaurant before moving to the Mountain View area, she said.

Song Pa's menu is similar to Totoro's, with dishes like bibimbap, kimchi fried rice, japchae and bulgogi. There’s also an entire vegetarian section on the menu.


I loved Totoro. The owners were such nice people and the food was excellent. I will miss this place and hope the new restaurant is reasonably priced and not pretentious.

I have walked by this restaurant under the new ownership and I assure you that the decor could not be described as pretentious.

If you click on the hyperlink labeled "menu" in Elena's post, you can see the prices and judge for yourself.


Good food in my experiences with the new place. Friends who knew Totoro praised Song Pa's versions of familiar dishes, and Song Pa seems to get plenty of customers. Also the space was lightly remodeled and the furnishings updated.

I think Totoro regulars will be pleased. Song Pa seems like Totoro's hand-picked successor, and in regular contact with the Kim family that operated Totoro, so there are connections.


The menu sounds like pretty generic Americanized Korean food. How does the quality compare to the Korean restaurants in Sunnyvale and Santa Clara?

Report Objectionable Content
+   2 people like this
Posted by Max Hauser, a resident of Mountain View,
on Feb 17, 2016 at 11:40 am
Max Hauser is a registered user.


Reader: Try it, and judge for yourself! Song Pa's menu so far (due for expansion later, they said) features some of the most _popular_ Korean dishes found in the Bay Area, so they will be found in many such restaurants; its kitchen appears to be run by Korean immigrants (as with Totoro). My own point of comparison is Totoro -- a gem of a local restaurant with its warm owners, and very popular; on that measure, Song Pa has looked and cooked well. The famous cluster of eight or so Korean restaurants around the 95051 Zip code (Santa Clara near Sunnyvale) is a world unto itself, and if someone is choosing to drive some distance already for Korean food, I might suggest going there; whereas I have the impression that Totoro's customer base tended to live or work nearby.


Correction: My previous comment was addressed not to Reader but to "resident, a resident of Menlo Park: Downtown."


Would visit if there were a gluten-free menu. Likely the soy sauces/bibimbap sauce contain gluten. Would be perfect if they had potato noodles too. Sizzling Stone in Milpitas has my favorite dolsot bibimbap around here thus far.

There is a good chance that some of their dishes are gluten free, but you will have to ask them directly. In the same way, there are likely some vegetarian/vegan dishes, but aren't called out specifically as that category.

A lot of ethnic restaurants have dishes that fit those categories, but may not be directly marketed that way.


Absolutely delicious spicy pork, pickled veggies, potatoes, and superb tea! My sister had long recommended Totoro's and a friend and I decided to try it and were informed it had just closed, but found it was reopened as Song Pa. Huge servings, so we got doggy bags and enjoyed dinners for a couple of more nights! Nice and quiet so we could carry on a good conversation.

The Nut House is back -- with a self-taught chef and Palo Alto native in the kitchen
By Elena Kadvany | 14 comments | 5,884 views

Some of your comments on nuclear energy
By Sherry Listgarten | 20 comments | 4,925 views

Public statues: Up or down? But does the historical importance of the individuals represented matter?
By Diana Diamond | 28 comments | 2,794 views