Uploaded: Apr 5, 2016
Last year, my dentist moved to an ultramodern suite. Before he cleaned my teeth, I was offered the opportunity to dip my hands in paraffin wax. An assistant wrapped them in mittens. A seed-filled pillow was placed under my head. Spa Dentistry is pampering patients and differentiating dentists.

So when Mountain View’s Allure Dental Center invited me to check out the NuCalm patient relaxation system they recently acquired I was eager to try it. About 2000 dental practices use NuCalm in the US. Some doctors are using it for cancer patients. It is also used by athletes. In particular, the Chicago Blackhawks attribute two Stanley Cup wins to using NuCalm. Ashley Blanke, vice president of business development at Solace Lifesciences told me the company is working on a consumer product.

NuCalm puts patients in a relaxed state using three approaches – dietary supplements, electrical waves and sound waves. I only experienced the latter two. First, cream and an electrode were applied on each side of my neck above the carotid artery. The cream encourages electrical signals. The electrodes connect to a Cranial Electrotherapy Stimulation (CES) FDA Class 2 approved device that provides a mild electric current. It was so mild I did not feel anything. Secondly, I listened to soothing music through noise canceling headphones. Finally, an eye mask blocked out distracting light. 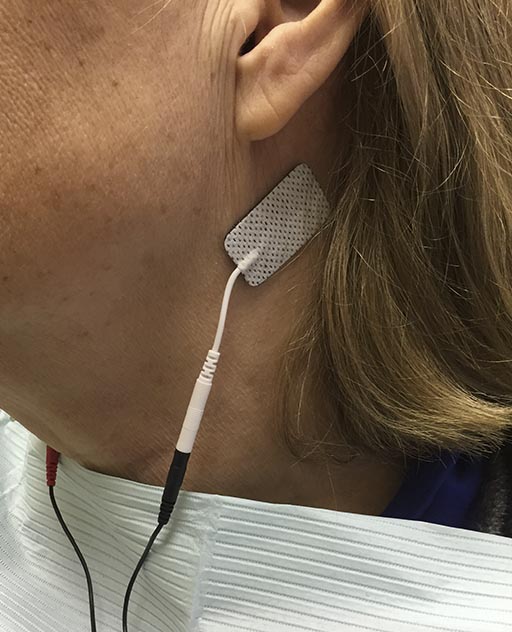 In November 2015, Solace Lifesciences (founded in 2002) received US patent 9,079,030 for its NuCalm technology, first launched in 2010. NuCalm works by changing brain chemistry and electrical signals. (Warning the therapy should not be used by pregnant women, epileptics or those with pacemakers.) GABA (gamma-aminobutyric acid) helps regulate anxiety in the brain. The cream contains Lactium casein decapeptide made from milk protein, GABA and L-Theanine found in green tea, among other ingredients. The electric current opens up GABA receptors which tends to reduce excitability.

The body has many “beats” – an example is the heart beat. Brain waves beat at different frequencies – Alpha waves beat 8 – 12 times a second (i.e. at 8-12Hz) and characterize a relaxed, sleepy state like that when you first awake. Beta waves, at 12-27Hz characterize a wide awake state. Theta waves, at 3-8Hz are present when one is extremely relaxed.

Resonance makes waves. Crowds marching on a bridge can make it shake. Singers can shatter glasses by making them vibrate. Put a piece of paper on a guitar string and pluck the same note on another string by stopping the string on a fret. The paper will jump off the first string as it resonates. If you sing a bit out of tune in a choir, you will hear beats where sound waves mix. Solace Lifesciences has its own studio to add low frequency sounds to music – one ear gets a channel at 100 Hz and the other ear gets a channel at 112 Hz. They hired a classical guitarist to perform, then added the low frequencies to his music. This produces oscillating beats that stimulate calm Alpha brain waves around 12 Hz to resonate.

The music was relaxing – piano and violin playing a traditional Welsh melody, “The Ash Grove”, for example. I noticed that my breathing was relaxed as it might be after a meditative yoga session. I can’t say that I felt much different from my usual pattern at the dentist, because I tend to go first thing in the morning when I am half awake and almost fall asleep on a reclined dental chair. I felt a little frustrated that I couldn’t see what tools the hygienist was using. To prevent fidgeting, I like to sit on my hands at the dentist and I found myself doing this in my test session, something impossible when one’s hands are covered in paraffin wax. So I didn’t relax so much that my hands just fell where they pleased.

A couple of Finnish studies in 2007 showed that about half of patients aged 30-49 were anxious about visiting the dentist, compared with about a quarter aged 50 and over. Younger patients tend to be more frightened of the dentist than older ones. A Swedish study compared dental anxiety between 1962 and 2013. In 1962, 15.1% of 1331 individuals reported high dental anxiety, compared with 9.2% of 3500 interviewees in 2013. Again, older people tend to be less scared of the dentist than younger ones. 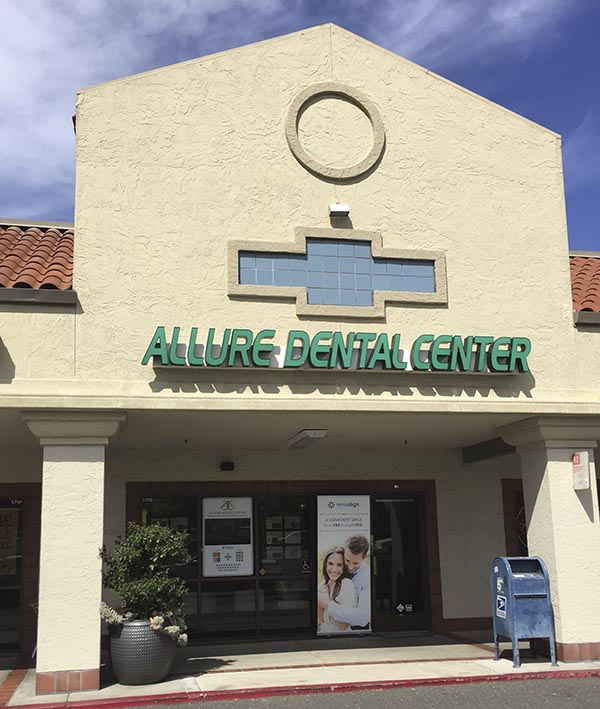 Allure Dental Center is in a shopping mall on N Shoreline Boulevard with Asian decor. The cosmetic dental practice is run by two sisters – Dr Trinh Lee and Dr Suzanna Lee. They are passionate about making patients comfortable and even went to Egypt to learn new techniques. Almost a third of dentists are women in California (Source: Kaiser Family Foundation, January 2016). I enjoyed the experience and whether or not I was more relaxed than usual, I can vouch that my teeth were cleaned very thoroughly. I also found that some tense muscles in my legs seemed more relaxed after leaving the dental surgery. (Disclosure: to test the system they offered me complementary teeth cleaning).

How we eat away at our open space, even in Palo Alto
By Sherry Listgarten | 5 comments | 7,390 views

Three new restaurants from former Manresa chef David Kinch and his team are coming to Los Gatos
By The Peninsula Foodist | 2 comments | 4,536 views