Uploaded: Aug 4, 2016
Guenevere Blanchard is fond of saying she found a way to "de-villainize the French fry."

Blanchard is the proud owner of 3potato4, which sells baked French fries topped with vegan homemade sauces and served in a compostable paper cone. The fries are 99-percent fat-free, gluten-free, non-GMO, all-natural, organic and vegan. Blanchard is opening her second-ever location at Stanford Shopping Center in Palo Alto this fall.

"Essentially, what we're offering people is just a healthy version of the food they already like," she said.

At 3potato4, you can choose from four kinds of potatoes (wedge- or crinkle-cut russets, waffle-cut sweet potatoes or rosemary redskins), then from 20 sauces (from curry ketchup and chipotle mayo to Thai aioli and wasabi-gnger mayo) that come on top. And it's still fast food -- Blanchard said the eatery's wait time is one to three minutes. 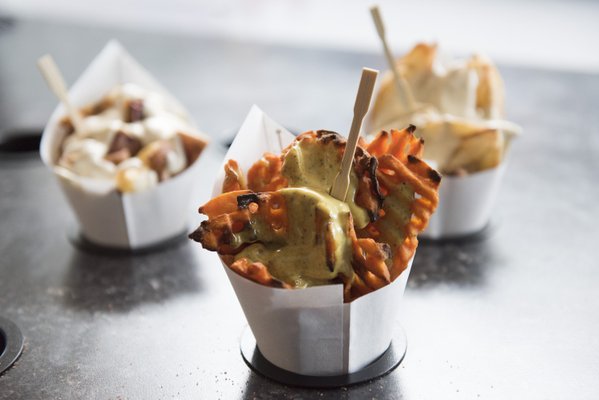 There are also specialty fries -- garlic-baked, cheesy-baked, chili-baked and fish and chips -- as well as soups, chilis and soft-serve ice cream.

The 3potato4 concept was first born in a Ben & Jerry's franchise on the East Coast, which Blanchard owned with a friend. Business was slow during the winter one year, so she came up with the idea for a
"complimentary product that was similar to ice cream cone but completely opposite."

Instead of a sweet cone filled with cold ice cream and toppings, she came up with a paper cone filled with warm, savory baked French fries with toppings. The fries quickly starting outselling the ice cream, and Ben & Jerry's caught wind of it, Blanchard said. They decided to pursue the fries concept full time, and since 2012 have been "beta testing" it all over the United States, Blanchard said.

She opened the first brick-and-mortar location in Salem, Massachusetts in 2012. The first Bay Area location was a one-year pop-up on Market Street in San Francisco (“so we could beta-test apps with Twitter,” Blanchard said), followed by a permanent outpost she opened near Fisherman's Wharf about two years ago.

The Stanford 3potato4 is the first in a serious expansion plan to open 15 new locations throughout California. Stanford is set to come online in September, followed by Pleasanton in October, three more in the Bay Area next year and then Southern California after that, Blanchard said.

On top of being health conscious, the eatery itself produces zero waste. Everything served at 3potato4 is consumable, compostable and recyclable, Blanchard said. (Things that look like they're made from plastic are actually made from potato starch.)

She also likes to sponsor local charities and is particularly passionate about the wellbeing of animals, so is looking for Palo Alto organizations to work with and support.

3potato4 will be located on the north side of the mall, on Quarry Walk. (See this shopping center map.)

I was almost excited, but...

Junk carbs minus the fat aren't really any healthier. If I'm going to eat french fries, I want them fried (ideally in lard, tallow, or duck fat) and the mayo had better contain eggs!

Report Objectionable Content
Posted by Be Positive, a resident of Leland Manor/Garland Drive,
on Aug 10, 2016 at 9:38 am
Be Positive is a registered user.


Where in the mall will this be?

Report Objectionable Content
Posted by Elena Kadvany, education reporter of the Palo Alto Weekly,
on Aug 10, 2016 at 11:04 am
Elena Kadvany is a registered user.


Be Positive: Thanks for asking; I thought I had included that in the story!

3potato4 is moving into half of a space recently vacated by Red Mango and Auntie Anne’s Pretzels, near McDonald's. It's located on "Electioneer Court" near Quarry Walk on this map: Web Link

Report Objectionable Content
Posted by MPer, a resident of Menlo Park: Central Menlo Park,
on Aug 10, 2016 at 11:50 am


Aren't ALL French Frys Gluten Free and Vegan unless cooked in animal fat??
I hate it when marketers use fads diets to differentiate their product where none exists.

She found a way to "de-villainize the French fry."Is the owner really trying to take credit for the idea of putting sauces on French fries? They do this pretty much everywhere!

Basically she is selling baked pototoes with dipping sauces. Yawn.

Report Objectionable Content
Posted by Laura Stec, a resident of Portola Valley: other,
on Aug 11, 2016 at 7:55 am


Readers: I mistakenly reported in a comment above where 3potato4 will be located. It is not moving into the former Red Mango/Auntie Anne’s Pretzels space, but rather on the other side of McDonald's, on Quarry Walk. Web Link

Report Objectionable Content
Posted by Katy, a resident of another community,
on Oct 5, 2016 at 12:52 am
Katy is a registered user.


As someone who recently became vegan, this is great! The potatoes are organic. GMO potatoes are grown for fast food chains by heavily poisoning, so lethal it has to be applied by machines, no human handlers. The potatoes are harvested by machine too (again too toxic for people to handle). They are so toxic, they have to sit for 6 weeks in vented buildings before they can be processed for fries. Around the perimeter of the building is a ring of dead birds. You can make some pretty awesome sauces using things like cashews. I for one hope this is as good as it sounds. I think people should reserve judgement until they have actually tried the product. Who knows, you may find that you prefer fries prepared in a more healthy manner. As the saying goes "Don't knock it until you have tried it."

Our First Anniversary in my Husband’s Retirement
By Chandrama Anderson | 1 comment | 2,111 views

I Was At The Stanford Shooting. Let’s Do Better
By Laura Stec | 0 comments | 124 views