The shop closed last January before the shopping center demolished the building it was in to make way for several new shops. It was formerly located toward the El Camino Real entrance to the mall, next to the old Bloomingdale’s building; it is now located closer to Quarry Road, on “Electioneer Court” (see this map of the shopping center for reference).

The new space is bigger, brighter and better with “dry” and “wet” bars with different tea options. On the “dry bar” side of the store, the walls are stocked with colorful canisters, bags and dispensers of dry loose-leaf tea. At the “wet bar,” customers can sample different favors of fresh-brewed teas. 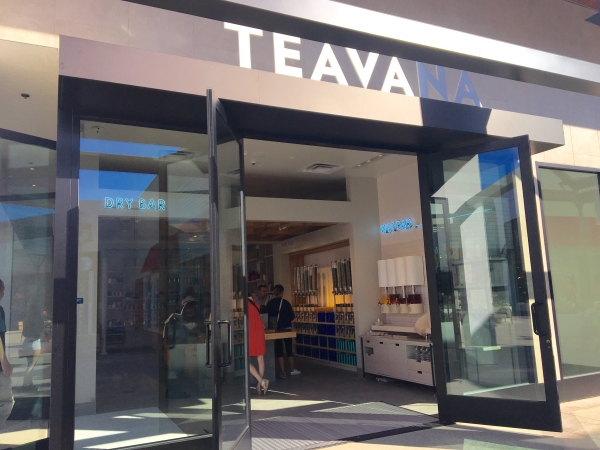 The redesigned store — a new concept that Teavana has opened elsewhere in the United States — is meant to "turn the original store experience inside out, so it’s more invitational," Anthony Perez, director of Americas Concepts and Pacific Northwest Store Design for Starbucks and Teavana, said in a press release about two revamped stores in the Seattle area. "You can experience the store through a self-guided tour or learn about tea alongside one of our tea experts."

The new Teavanas, including in Palo Alto, have a "make table" running down the center of the stores where people can taste different teas or mix a custom blend.

Teavana is the latest in several new retailers to open at the mall, with many more set to come online over the next few months as part of an extensive renovation plan. It will be neighbors with two new eateries opening this fall: Go Fish Poke Bar, a fast-casual poke eatery, and 3potato4, which sells vegan, gluten-free baked French fries.

Tender Greens, a "fine casual restaurant concept serving farm-to-fork cuisine," is also scheduled to open at the end of August, according to a job-fair posting on the shopping center’s website. Health-forward True Food Kitchen, which serves a range of vegan, vegetarian and gluten-free menu items, is expected to open by Sept. 30, and Japanese dessert chain Minamoto Kitchoan, by mid-December, according to the Stanford website.

I really like the tea a lot.
I am happy it came back.

How we eat away at our open space, even in Palo Alto
By Sherry Listgarten | 5 comments | 7,400 views

Three new restaurants from former Manresa chef David Kinch and his team are coming to Los Gatos
By The Peninsula Foodist | 2 comments | 4,541 views