Uploaded: Oct 6, 2016
Calling all Paly, Gunn and Castilleja students: Ike Shehadeh, owner of popular Bay Area sandwich purveyor Ike's Place, wants local high schoolers to send him their best ideas for sandwich creations, and the winning combinations from each school will make it onto the menu at his forthcoming downtown Palo Alto shop.

Ike's, which started in San Francisco and has since steadily expanded throughout the Bay Area, Southern California and beyond, is known for its over-the-top combinations of ingredients, extensive menus and eclectic mix of sandwich names (Pastrami Charmed Life, anyone?). 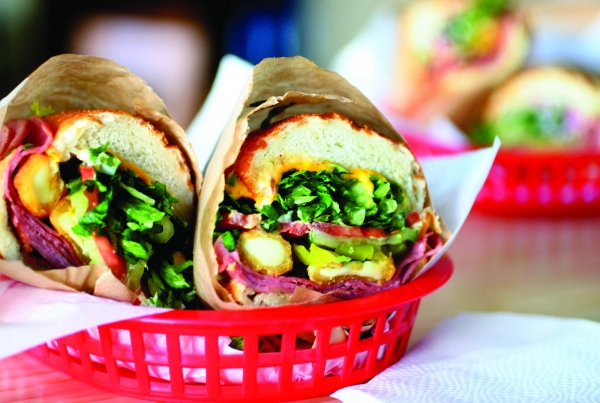 Students can send their ideas directly to Shehadeh via Facebook message at facebook.com/tobelikeike.

Once the contest is over, there will be taste tests with each school where Shehadeh himself will make the top entries, and tasters (which will include students, if they want to, Shehadeh said) will choose a winner for each school.

They'll go on the menu of the new Palo Alto location once it opens at 401 Lytton Ave., which could be soon, despite many months of delays. Shehadeh said an inspection is scheduled for the end of the month and if all goes well, he'll open soon after that.

Since the controversial exit of Ike’s Place from Stanford University in 2014, he managed to open a grab-and-go Ike's Place, or "Ike's Press," this spring. While his contract there is temporary, it was recently extended through the end of the year.

The menu has also expanded since the Stanford outpost first opened in April and was serving a limited selection of cold, pre-made sandwiches. There are now more than 25 sandwiches on the menu, both toasted and cold, and they're allowing customers to customize with add-on ingredients, Shehadeh said. Stanford is also now serving a new Ike's concept: flatbread dutch-crunch pizzas.

When and where is the 'forthcoming' sandwich shop????


Hi Tom -- You might have missed it lower down in the story. A new Ike's Place is set to open at 401 Lytton Ave. in downtown Palo Alto.

Report Objectionable Content
Posted by is it healthy, a resident of South of Midtown,
on Oct 7, 2016 at 4:42 pm


is it healthy to breathe all thos nitrogen ''smoke'' like stuff at ''creamistry''?wouldn't want to breathe that stuff all day.

Report Objectionable Content
Posted by veggie option, a resident of Barron Park,
on Oct 7, 2016 at 5:25 pm


A second veggie option and/or a sandwich that isn't covered with sauce would be nice at the new location, as well as the grab-and-go spot at Stanford.

Report Objectionable Content
Posted by Michael O., a resident of Gunn High School,
on Oct 8, 2016 at 1:42 am
Michael O. is a registered user.


Is it Healthy might want to know that our atmosphere is 78% nitrogen gas already, so, uh, it's probably not too unhealthy to breath it.

Report Objectionable Content
Posted by MPer, a resident of Menlo Park: Central Menlo Park,
on Oct 12, 2016 at 10:45 am

Thanks adding a comment that has absolutely nothing to do with the story.

Unfortunately, IKES is overpriced and mediocre. We get them at work sometimes and they are always soggy. Yuck

Report Objectionable Content
Posted by Duh!, a resident of Another Mountain View Neighborhood,
on Oct 12, 2016 at 4:14 pm


@ Is it Healthy.
Obviously you are not sure between the difference of liquid nitrogen used in the process of making Ice Cream at Creamistry vs serving sandwiches at Ike's.
However, we are ALL free to believe in whatever we want to. Remember, it is your real universe that no one can take away from you. However, the Ice Cream at the Creamistry is very good! and High-5's and Kudo's for Ike's! While some think that Ike's is mediocre is missing the point - Ike's is expanding and bringing jobs to Mountain View!

Report Objectionable Content
Posted by Reader, a resident of another community,
on Oct 13, 2016 at 8:00 am

Read the article: the upcoming store is in downtown Palo Alto, not Mountain View.

Personally, I would love to see an Ike's in downtown Mountain View, it would be a great addition to the dining scene.


I'm looking forward to the new location!! I work just a block away and couldn't be happier!! I've been to the Cupertino location and LOVE everything I have had there.

Doing more with the natural spaces we have
By Sherry Listgarten | 6 comments | 2,557 views