Uploaded: Jan 17, 2017
Facing the end of a five-year lease and a rent increase that was hard to justify, fast-casual Indian eatery Tava Kitchen closed on Monday, Jan. 16, at Town & Country Village in Palo Alto.

Co-owner Hasnain Zaidi confirmed the closure. A note posted in the restaurant's windows on Monday called the closure a "huge bummer," expressing gratitude for customers' support over the years.

"We continued to be really excited about Palo Alto but frankly, the lease was up and with where the retail and rental situation is in the Bay Area, it was really hard to actually get to a point where it made sense to sign up for more," Zaidi said in a phone interview Tuesday. 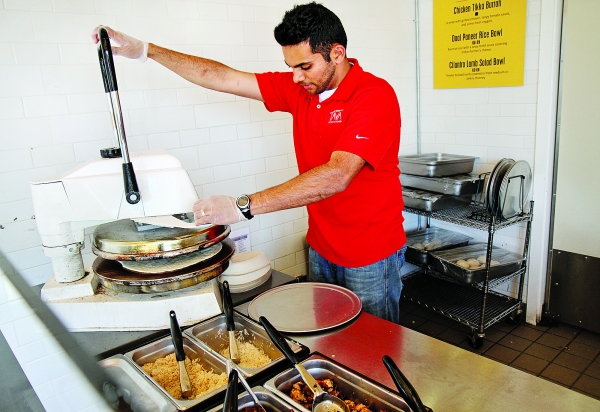 Town & Country Village was looking to raise Tava Kitchen's rent, Zaidi said, and they eventually made the hard decision to close. The increase would have brought their Palo Alto rent in line with what they pay for their San Francisco and Alameda locations, he said.

The small size of the space (860 square feet) was also becoming "tricky" for the growing restaurant, Zaidi said. It's tucked in the back of the shopping center, next to the relatively new Belcampo Meat Co.

Before closing, the owners worked to help employees find employment elsewhere, including at two other Tava Kitchen locations in San Francisco and Alameda, which will remain open, or other local restaurants, Zaidi said.

Zaidi opened Tava Kitchen (then called Tava Indian Kitchen) in February of 2012 with two college friends — "three friends with a simple dream of building a place that served delicious food," the note posted in the window reads. They served Indian-style burritos, rice and salad bowls made with grass-fed meats and house-ground spices, among other quality ingredients, from behind a glass counter.

Last March, the restaurant rebranded itself as "Tava Kitchen" with a new menu.

A press release on the relaunch also announced a plan to open 12 more restaurants by 2018. They've since tapered that goal, Zaidi said, though they plan to open a Tava Kitchen in Colorado this spring.

"Given the significant headwinds and challenges facing restaurants these days we plan to grow more deliberately and a little more slowly than our initial projections — now as much as ever restauranteurs need to be thoughtful about every location they open," he said.

Zaidi said he and his co-owners are grateful for the chance Town & Country gave them when they first started and "dearly value" the ownership.

"There's a lot of sentimental value, but ultimately from a business standpoint, it just didn't make sense to try to push for longer," he said.

He's hopeful, however, that Tava Kitchen will return to Palo Alto at some point in the future.

"I still love Palo Alto," he said. "I hope at some point down the line it makes sense for us to get another store here. This community means a lot to us and I think they really like what we have to offer."

Love this blog to keep up with the local restaurant scene! Fun to have the first news on developments (e.g., the breaking news on Nobu before any other source had it). Keep up the good work!


Are we to feel sorry? The key to a good restaurant is food quality. (read between lines).

Report Objectionable Content
Posted by Zareen, a resident of Evergreen Park,
on Jan 17, 2017 at 3:31 pm


Sorry to see you go Tava. I ll have to drive to SF to get my burroti fix :(

Report Objectionable Content
Posted by reading, a resident of Midtown,
on Jan 17, 2017 at 3:41 pm


How can anyone read between lines, @Patrick? Your review is only one line.

Report Objectionable Content
Posted by resdient, a resident of Greenmeadow,
on Jan 17, 2017 at 4:39 pm


.....sorry to see Tava go. My family loved the place: wonderful food at a great price. "fast food" in an accessible, healthy way. This is a loss to the community.

Report Objectionable Content
Posted by charles reilly , a resident of another community,
on Jan 17, 2017 at 8:18 pm


@Patrick's comment is sooooo naive. Many, many quirky components seem to comprise the success of a restaurant operation. Or lack thereof. Location, service, PRICE, ambiance, style, staff training ... the list is almost endless. Not to mention the affluence of the surrounding community - or un-affluence ....

It's a shame the general public usually takes all this for granted.


Loved tava until it became some American Indian Mexican fusion. I'm convinced that if they'd kept the hand pressed naan that is so beautifully pictured above, they'd still be in business. Such a shame to substitute roti for a packaged tortilla ://


Mr. Zaidi, thank you for taking care of your employees by helping them find jobs elsewhere. Wishing you and your team all the best.

Report Objectionable Content
Posted by Fran, a resident of Charleston Gardens,
on Jan 18, 2017 at 10:12 pm


Patric is right. Quality is key. Only this place had good food.

Report Objectionable Content
Posted by @ Sad student, a resident of another community,
on Jan 19, 2017 at 2:14 am


"Such a shame to substitute roti for a packaged tortilla"

I don't get it: Restaurant roti should be much more interesting than any packaged tortilla -- a real improvement. So is the statement meant to be ironic? (The emoticon after it is ambiguous, and irony is tricky in online communication anyway -- see the famous RFC 1855.) Or, did "Sad student" mean substitute the tortilla for the roti (despite writing the other way around) -- one of a class of writing errors increasingly popular today -- ?? Either way, it's confusing.

Report Objectionable Content
Posted by Herbert, a resident of Embarcadero Oaks/Leland,
on Jan 19, 2017 at 4:44 am


We used to patronize Tava regularly until they started watering down the roti batter -- no doubt to improve profits/save money -- to the point that the rotis fell apart. Kind of defeats the whole fast food concept. Once that happened, I didn't think they'd last as long as they did.


As Tava goes, so do other restaurants and small shops that disappear from Palo Alto, as greedy landlords fleece the pockets of the small business person. Palo Alto has become even more elitist and has changed dramatically, albeit not for the better, in the last forty years. The small business person is the backbone of this country and struggle mightily to make a livelihood for themselves and their families. Unfortunately, we won't see any change to this situation, as small business owners and restauranteurs will bypass Palo Alto altogether and open their enterprises in adjacent communities, or in more far-flung locales with lower overhead, that will value and support new, locally-owned businesses.

Report Objectionable Content
Posted by tava, a resident of Downtown North,
on Jan 20, 2017 at 1:35 pm


Unfortunately they changed their menu and remodeled and I dont think it was the right direction. I really loved their old menu-but don't fix what isn't broke

Report Objectionable Content
Posted by Kindness Matters, a resident of Crescent Park,
on Jan 20, 2017 at 3:01 pm


I'm very sorry to see Tava leave Palo Alto. I think it was the accessibility and parking that made it difficult to patronize this very nice restaurant, not the food (you're just mean spirited Patrick). Town & Country went from a sleepy village to a fun village to a frustrating village. For their tiny little space Tava was likely paying $7,000 a month rent. They kept longer hours than anyone else around them, their employees were always polite and helpful, and their portions were generous and delicious. T&C certainly doesn't make it easy to renew a lease. Best of luck with your new restaurants.


This is America! Do we need all of these different types of eateries? We can go to India if we want to eat what is on this menu. So tired of this country trying to be other countries. Enough already!

Report Objectionable Content
Posted by Gale Johnson, a resident of Adobe-Meadow,
on Jan 23, 2017 at 2:22 pm

I disagree. You've got it all wrong. One of the best parts of living here (I live in Palo Alto) is that we can go to restaurants that serve food from almost every country and ethnic group in the world. No air fare, land transportation costs, hotel costs, required. Just drive a few miles, eat, and enjoy. Yes, it is true that many restaurants fail, but there are good reasons for that. Those that survive have figured out how to do it and many of them are thriving.

Report Objectionable Content
Posted by Julia, a resident of Evergreen Park,
on Feb 2, 2017 at 12:24 pm


To the commenter saying "This is America! Do we need all these different type of eateries?" I would counter "This is America! Thank goodness, diversity is what makes us great." Our eateries should reflect the people who live here. Palo Alto is multicultural and richer for that (in more ways than one). Shame on you for suggesting we "go to India" for the food at Tava (not that Tava was traditional Indian/Pakistani,etc food by any means). I had thought that we lived in a more educated and cultured community. Embarrassed that you're my neighbor.

Doing more with the natural spaces we have
By Sherry Listgarten | 3 comments | 1,514 views