Uploaded: Apr 6, 2017
What seems to have been Palo Alto's only rooftop cafe has closed, albeit temporarily, with Fambrini's Terrace Cafe moving to a new location next door on El Camino Real.

The family-owned Fambrini's, long located on the second floor of a building at 2600 El Camino Real, closed on March 21 due to an impending redevelopment at the site, according to a post on the cafe's Facebook page. The six-story Brutalist building just north of Page Mill Road is set to be demolished and replaced with a four-story office building. 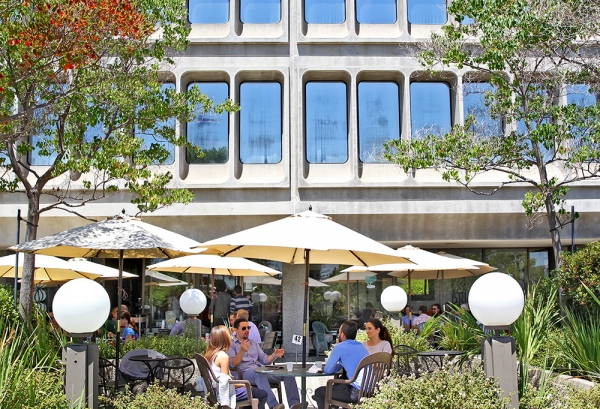 Fambrini's customers dine outside at the popular lunch spot, located on the second floor of a to-be-demolished building at 2600 El Camino Real. Photo by Veronica Weber/Palo Alto Weekly.

Fambrini's isn't going far, but it will no longer have a rooftop terrace for customers to enjoy the cafe's sandwiches and salads. The cafe will reopen in a ground-level space at 2500 El Camino Real in mid-June, per the Facebook post.

Nikolay Penchev, who co-owns the cafe with his wife Galia Raeva, said that the relocated Fambrini's will be the "same exact concept," although he hopes to add a few menu items and expand the cafe's hours. Eventually, Fambrini's will be open for a 12-hour day -- such as 8 a.m. to 8 p.m. or 9 a.m. to 9 p.m., Penchev said -- and stay open on weekends.

And if your favorite part about Fambrini's was the outdoor dining, don't despair. The new space also has a large, ground-floor outdoor patio that can seat about 85 people, he said.

Patti Fambrini opened the El Camino Real cafe in the early 1990s after starting a local catering business. She sold Fambrini's to Penchev and Raeva seven years ago.

Can't wait for them to reopen! Easily the best sandwiches in Palo Alto - I love this place and Nick and Galia are such great hosts. A great menu and now a beautiful new setting - Looking forward to the reopening!

Report Objectionable Content
Posted by Suelem Arevalo, a resident of another community,
on Apr 25, 2017 at 11:57 am


We miss you guys! I can't wait to eat salmon & mango salad in the new location.

State Street Market plans overhaul of its eateries as it cuts ties with Bon Appétit, triggering layoffs
By The Peninsula Foodist | 10 comments | 3,424 views

Doing more with the natural spaces we have
By Sherry Listgarten | 3 comments | 1,917 views