Uploaded: Jun 26, 2017
Grace Nguyen, the executive chef of fast-casual eatery Asian Box, has opened a new concept in Palo Alto: a gluten-free bakery where, according to CEO Frank Klein, customers can also access computers for free.

For now, from 11 a.m. to 2 p.m. Monday through Friday, customers can get Nguyen's gluten-free goods like chocolate-chip cookies, donuts and handpies. The bakery will also serve daily lunch specials from the Asian Box menu, even though it's is not an Asian Box location. (The Asian-fusion menu is posted behind the counter where customers order.) 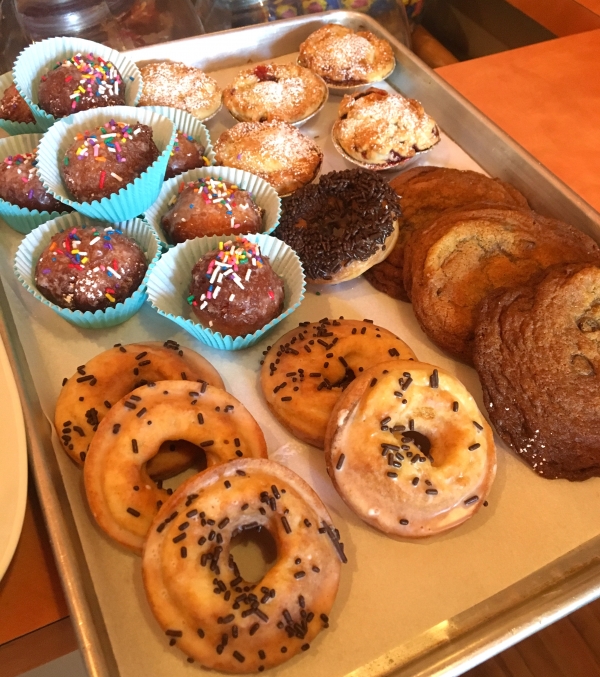 An array of gluten-free baked goods on a recent afternoon at Gracie Jones' GF Bake Shop. Photo by Elena Kadvany.

Customers can also use several Mac desktop computers set up for free use, as well as a printer,  said Klein. He described the space as a "community center" where people can have a baked good, a cup of coffee or lunch while using the computers. 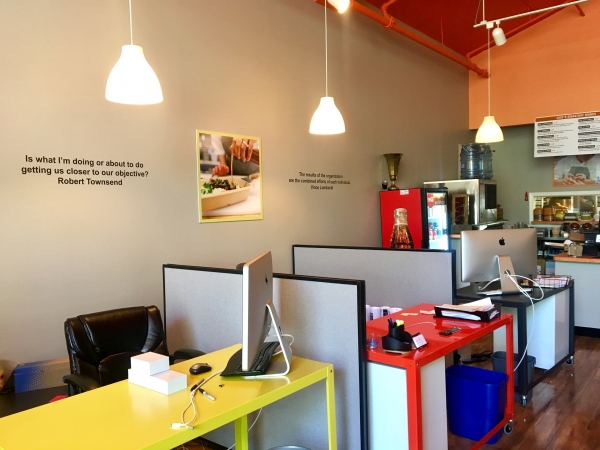 Computers are available for free use at the Middlefield Road bakery. Photo by Elena Kadvany.

"We think that it's a good hybrid use of the space," he said, sitting at his own desk recently in the open-layout space. Other Asian Box employees appeared to be working at desks at the time.

After July 4, the Bake Shop will be open from 10 a.m. to 3 p.m., Monday through Friday and starting in September, on weekends.

Down the line, Nguyen plans to make ice cream and start a subscription service for gluten-free baked products, Klein said.

Asian Box began with one location at Town & Country Village in Palo Alto in 2011, serving dishes made from Nguyen's family recipes. The company has since grown to seven locations in both the Bay Area and Southern California, with more planned for this year. ?


A very small minority of people must strictly avoid glutens for unusual medical reasons (gluten enteropathies -- celiac sprue -- from abormal handling of nutrients in the intestinal tract). Some recent popular medical writing argues for a general reduction in grain intake for broader biochemical reasons (exacerbated by commodity wheat strains bred for purely commercial value -- wheat in today's mass-market hamburger bun or sandwich bread isn't the grain our ancestors ate), although an element of good old diet faddishness is visible even in popular medical sources, as with earlier fashionable pop-med advice (widely but superficially read) that led, for example, many people to mindlessly shun all carbohydrates 20 years ago, and to eat artificially hydrogenated vegetable oils 50 years ago. Some of those people did themselves serious harm.

With that in mind, never forget that glutens are at the core of grain protein sources. Many, or most, of us wouldn't exist now if gluten-based grains hadn't nourished many of our ancestors. Some critics even point to gluten avoidance, among affluent middle classes who spread the idea and who have the luxury to pick and choose what they eat, as a conspicuous "form of virtuous self-denial that would have made the Victorians proud" Web Link Let's see if it outlasts the other periodic dietary whims.

Report Objectionable Content
+   2 people like this
Posted by john_alderman, a resident of Crescent Park,
on Jun 26, 2017 at 4:06 pm
john_alderman is a registered user.


Baking is essentially the manipulation of gluten, so when you eliminate it you are removing the soul of the product. It is sad that store shelves are now dedicating so much space to gluten-free products when inevitably taste worse, have worse texture, and cost more. Gluten free is good for corporate profits though.


Celiac disease and gluten intolerance is more prevalent than many realize as it tends to go undiagnosed for many years. My husband and daughter have Celiac Disease and it's so difficult to participate in social gatherings or find restaurants where they can safely eat at without getting sick and risking damage to their stomachs. The old saying that we shouldn't judge until we've walked a mile in someone else's shoes really rings true here. Perhaps it would have been a good experience for others to spend last Friday at my home after my husband accidentally ate a bar with wheat in it and then got violently sick (throwing up over 20 times) and was in great pain and had to be brought to the ER where he spent 5 hours getting 2 bags of IV fluids and anti-nausea meds. It's a relief and absolutely wonderful to be able to eat somewhere where our family doesn't have to worry about cross contamination or whether they will get sick. The food at Asian Box tastes great and everyone I know enjoys it - whether they can eat gluten or not. I am grateful to have restaurant owners who provide delicious food for everyone to enjoy including those of us with Celiac Disease or gluten intolerance.

Report Objectionable Content
+   11 people like this
Posted by Bette, a resident of Another Palo Alto neighborhood,
on Jun 29, 2017 at 5:54 pm


Some are allergic to wheat which is a separate issue. The new bakery sounds wonderful
.


i'm thrilled, as i am gluten intolerant, and gluten gives me asthma soon after ingestion, as well as arthritis, severe fatigue leading to calling in sick, and dizziness/fainting sensation where I have to lie down. Even baking with regular wheat flour gives me asthma, due to the minute particles floating upwards. Yay for people without issues, but please be considerate of others and not judge.

Are our recycling bins too big?
By Sherry Listgarten | 13 comments | 2,753 views

I am Voting Yes on Measure RR to Provide Caltrain a Dedicated Revenue Source
By Steve Levy | 5 comments | 1,625 views