Wise Sons debuted at the market at the beginning of the month. Co-founder Evan Bloom said Wednesday that he and his brother Ari, also a co-founder, would frequent the downtown market when Ari lived in Palo Alto about a year and a half ago. That combined with the fact that there is an established Wise Sons customer base on the Peninsula — people who work in the city or drive there to eat at Wise Sons, Bloom said, plus local catering gigs — led them to eventually join the seasonal market.

Could this be a sign that Wise Sons is eyeing a brick-and-mortar location in Palo Alto?

Not yet, Bloom said, but "it's not something that I would take off the table."

If the past is any indication, Wise Sons started selling at the Marin Civic Center Farmers Market prior to opening a bagel shop nearby in Larkspur earlier this month. Farmers markets allow the team to get a "temperature for the clientele (and) customer base" and a better understanding of the local demand, Bloom said. 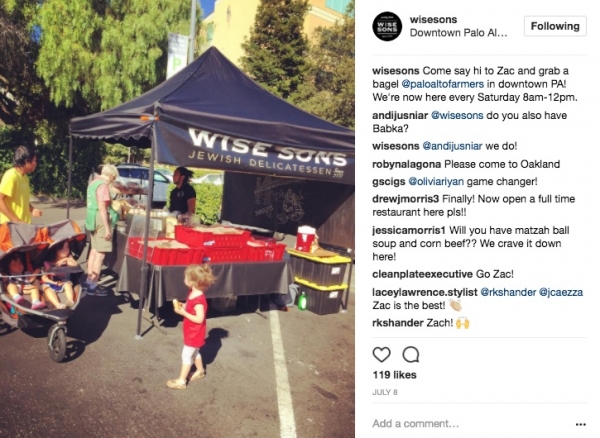 Wise Sons' bagel sandwiches aren't available at the Palo Alto market, but they weren't either in Marin until "popular demand" made it so, Bloom said. Toasted bagel sandwiches on offer at Wise Sons' bagelries range from a classic smoked salmon with capers, red onions whipped cream cheese to the "West Coast veggie" with hummus, roasted trumpet, cremini and maitake mushrooms, pickled onions and greens on a poppy seed bagel. Others come with add-ons like butter lettuce, hothouse tomatoes, slow-roasted brisket and spicy harissa schmear. 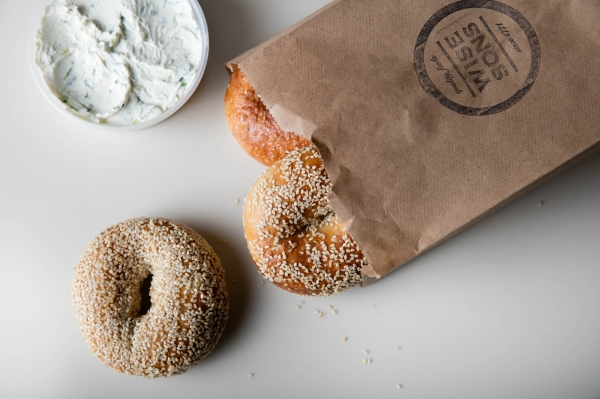 Wise Sons, which got its start as a deli-restaurant in San Francisco's Mission District in 2010, now operates four locations, including two bagel shops and a cafe at the Contemporary Jewish Museum in San Francisco. The owners are continuing to expand, with another outpost on its way to the Hayes Valley neighborhood. Wise Sons also has a stand at the Ferry Building farmers market.

Wise Sons makes everything from scratch, with attention to quality ingredients, Bloom said. The bagel dough is retarded for a day and a half to add extra flavor before it's boiled in water infused with malt syrup (the classic New York way), then baked. The flour for the dough comes from a local mill. Their pastrami and corned beef — made from hormone- and antibiotic-free beef brisket— are brined in a "proprietary" blend of spices and the pastrami smoked for close to seven hours over hickory wood, according to the Wise Sons website.

Bloom said they plan to be at the Palo Alto market through the end of the season, and again next year. The market is open on Saturdays from 8 a.m. to noon in the parking lots at Gilman Street and Hamilton Avenue through Dec. 16.

"We've been really happy with the turnout and people's interest and general enthusiasm," Bloom said. "Often times you may have people buying stuff, but we've also got people emailing us or on social media saying, 'thank you so much for being here,' and that carries a lot more weight than just sales."

JLN is a registered user.


without question, they're the best Jewish deli in the Bay Area. Worth a drive to San Francisco, but even better to have them in Palo Alto. And let's hope they settle in soon with a fixed location around here.

Izzy's Brooklyn Bagels is still the best place for bagels and fixings around here, but there's more to life than bagels, which is where Wise & Sons steps in.

Doing more with the natural spaces we have
By Sherry Listgarten | 3 comments | 1,514 views