Uploaded: Jul 31, 2017
Old Port Lobster Shack, which has served New England-style lobster rolls and other seafood fare in on the Midpeninsula for more a decade, opened a temporary pop-up at Stanford Shopping Center in Palo Alto earlier this month.

The pop-up is a test of sorts for a shaved-down version of the Lobster Shack. Russell Deutsch, a Portola Valley resident who opened the first Lobster Shack in Redwood City in 2006, recently sold the business but is involved in the pop-up concept, he said at the new restaurant on Monday. In a follow-up email, Deutsch said that he is only involved on a "consulting" basis, "offering start-up assistance and ideas" to the new owners. Old Port Lobster Shack locations in Redwood City, Ladera, Roseville and the pop-up are under the new ownership. 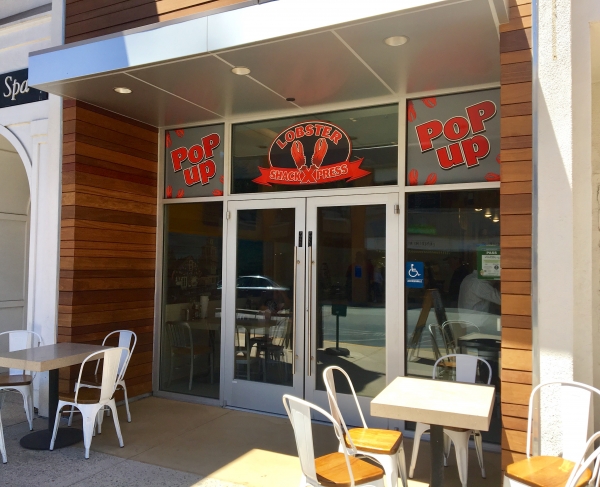 Deutsch, who was charged last year with sales tax evasion, recently sold Lobster Shack to three investors from Fremont and Union City. (He pleaded not guilty in March 2016, and his case is currently making its way through the courts with a pretrial conference recently scheduled, according to the San Mateo County District Attorney.)

The pop-up, dubbed the Lobster ShackXpress, took over a small space that was going to house 3potato4, next to McDonald's. 3potato4 owner Guenevere Blanchard pulled the plug on the project last February, alleging the construction company over-billed her and that, coupled with eight months of rent, left her "broke."

Drinks-wise, there are milkshakes ($4 for a small, $7 for a large), and Deutsch said the new owners are considering applying for a beer and wine license.

Deutsch said the pop-up will also serve new dishes he's been kicking around for several years, like chowder fries (think poutine but with clam chowder or lobster bisque).

There's some seating inside the small restaurant, which is decorated with ocean-themed memorabilia and an enormous map of New England, as well as two tables outside.

Lobster ShackXpress will be open through February, at which point the owners and shopping center management will evaluate if it should continue or not, Deutsch said.

"This is a pop-up venture to see if it's a working idea," he said.

In 2015, Deutsch tried a new concept, opening a pizza and burger joint at at the Ladera Country Shopper, a few storefronts away from that Lobster Shack location. Rusty's Roadside BBQ has since closed.

Lobster ShackXpress is located at 660 Stanford Shopping Center, #240C. Check out the menu below: 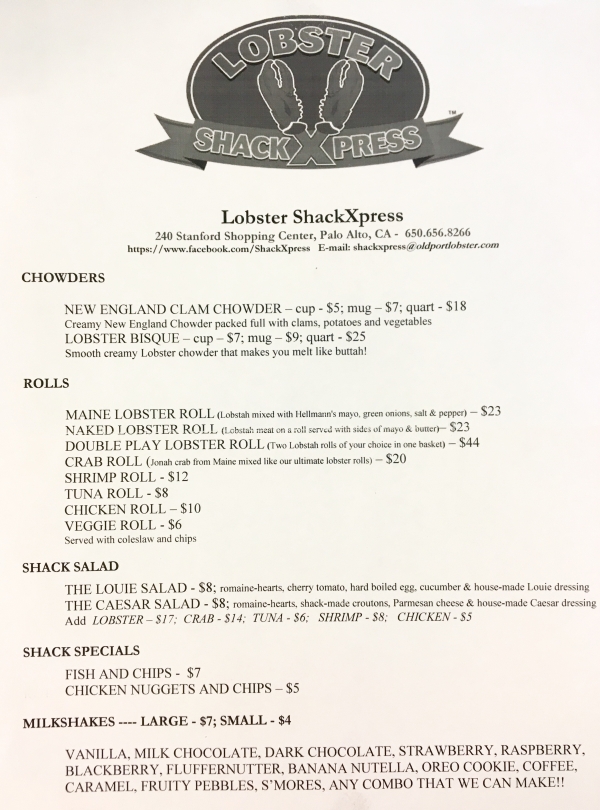 The price of east coast lobster is at an all time high:
Web Link

Population booms and declines are cyclical, like your dungee crabs, so if the thought of paying 23 bucks for a under-stuffed lobster roll makes you bristle, wait a few years.

This pop-up may make good sense to take advantage of the high price then pop away once they get down to regular levels. If you can't wait, it's VERY simple to make your own. You can buy them live many places and the sauce is usually very simple. Find a source for an epic bread roll and you'll be much happier, and significantly more full at the end because you control how much lobby goes in. Enjoy!

Report Objectionable Content
Posted by Mark Silverman, a resident of Menlo Park,
on Aug 5, 2017 at 1:35 pm


Another unnecessary dining attraction and a mundane chain operation no less.

I'm sticking with Cook's on the ECR in MP.