Uploaded: Sep 15, 2017
Ribs, brisket, pastrami and other barbecue fare is on the menu of Quality Bourbons & Barbecue in Mountain View, which opened its doors at 216 Castro St. on Tuesday.

Quality Bourbons & Barbecue, or QBB, is the brainchild of Kasim Syed, who owns Palo Alto Brewing Company, The Rose & Crown and The Tap Room in Palo Alto, and Jon Andino, former general manager at Scratch in Mountain View.

After several years of talking about wanting to open a restaurant together, they settled on barbecue, hoping to fill a hole in the Mountain View dining scene. 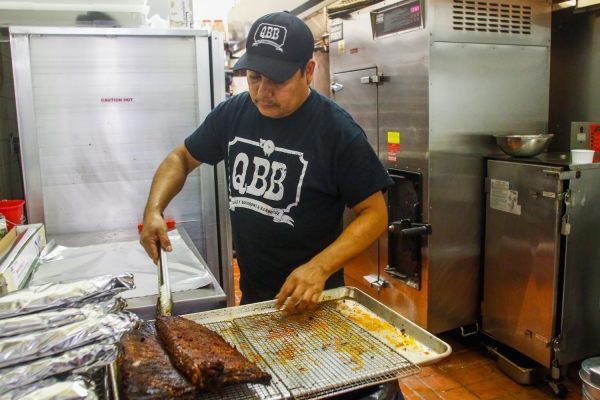 QBB's opening menu is split into appetizers, sandwiches, meat plates, "just the meat," sides and dessert. It's certainly a place for carnivores, from the "bacon explosion" appetizer (sausage that's stuffed with cream cheese, then wrapped with bacon and cut into medallions) to pastrami, reuben and French dip sandwiches.

For libations, Andino said in a previous interview that they planned to have Palo Alto Brewing Company beers on tap, cocktails on tap an "expansive" list of bourbons available to drink neat or on the rocks.

The restaurant sounds interesting! Unfortunately for me, it feels like it is more difficult parking and navigating through Castro in Mountain View than University Avenue in Palo Alto. We now avoid it whenever possible.


You can tell this is California. I used to live in Texas, and any review of a new bbq joint would include four paragraphs on how the restaurant would smoke its meat.

Report Objectionable Content
Posted by Eater, a resident of Mountain View,
on Sep 15, 2017 at 4:27 pm


Nayeli: Navigating and parking in downtown MV (which I've done often for many years) becomes challenging only if you choose to do it at exactly the peak times when everyone else is doing so too. Yet it's consistently easy to navigate and park for weekday lunch at 11:40 or 1:15 (and at those times, I've always found downtown MV easier than University Avenue, which I've also visited for many years). MV's two huge free public parking structures and many mid-block lots are simple to use, no tricky letter-coded permit areas, no Palo-Alto Permit-Parking-Only signs obscured by foliage to nail innocent newcomers with $75 parking fines.

I never try to park in any of the popular peninsula downtowns 7PM Fri. or Sat. night, or 12-1 weekdays for lunch. But avoiding those peak-demand time still leaves plenty of convenient times if you must park. And this new restaurant (Quality Bourbons and Barbecue) is just one (1) block from the Caltrain / VTA station.

Andrew: I can tell you're new to this blog. Elena Kadavny doesn't write "reviews" at all: this blog is about restaurant news, openings and closings. (She just pointed that out to another new reader in another recent post.)

Report Objectionable Content
Posted by Daniel, a resident of Old Mountain View,
on Sep 15, 2017 at 9:27 pm


Ate there today and was impressed. Ribs, pulled pork, and beans were delish. Brisket was ok but not fatty enough -- I'm more a fan of moist brisket than lean. Didn't try any libations or dessert, but will be sure to come again soon and try those. Service was friendly too.

All in all, thrilled to have real BBQ in Mountain View. Hope this place lasts, and that they keep up the quality.

Report Objectionable Content
Posted by Gale Johnson, a resident of Adobe-Meadow,
on Sep 16, 2017 at 2:12 pm
Gale Johnson is a registered user.


I'm anxious to try it. I had what I thought was the best Q west of the Mississippi, in St. Louis, many years ago when I was on a business trip.

I went to Fransecas's, on Old Middlefield Rd in Mt. View, a few years ago. I can't remember his name, but there was an African-American guy who made really good Q. He started out in East Palo Alto. He's gone and the ownership has changed. It's now O'Malley's Sports Bar. Also, fun times there sans good Q. But there's another Qer of high repute. He sets up shop at the car washing place in Mt. View on El Camino, Lozzano's. I haven't tried his yet either. I'm too impatient, and that's what it takes for good 'Q'. Low heat and long cooking times. So, thanks, Elena, I'll give it a try.

Report Objectionable Content
Posted by @Nayeli, a resident of Another Mountain View Neighborhood,
on Sep 17, 2017 at 5:52 am


OMG, you're missing out on SO MUCH. Trust me on those one, if you're willing to walk maybe 3 residential sized blocks, you can always find parking in MV.
The only people who have issues would be those who see parking lots right of Castro as the only solution. I hate to hear people missing out on the great things in life because of their thoughts. Don't be afraid, really. I head to DTMV all the time and it's really quite simple to park.t's also an enjoyable stroll from parking to Castro street. If you have any doubts, I can show you first hand and change your perception. Any time of the day, any day of the week DTMV is easy, but it's true that sometimes you need a good guide to point out the so so obvious solution.
It's quite different from the Dt Paolo Alto scene, where I agree, the University area has become horrible with all the transients lurking about on the fringes and in the parks. I would not recommend parking too far off Univ for safety reasons, and that means endlessly hunting for parking close to Univ. I stopped going to Univ about 5 year go, after the I was followed back to my car by some creep who darted away when a cop car drove by. DTPA is a pit but DTMV is quite nice, esp for families.

Report Objectionable Content
Posted by Gale Johnson, a resident of Adobe-Meadow,
on Sep 17, 2017 at 1:05 pm
Gale Johnson is a registered user.


Armadillo Willy's is good also. I love their baby back ribs with corn on the cob and french fries. A place in the East Bay, 'Smoking Pig' catered food for a big party at our local swim and tennis club. It was just okay. I don't know what all the rave is about pulled pork. It's stringy and gets caught in my teeth. I'd much rather eat a nice bone-in pork chop, but that's just my personal preference.

Report Objectionable Content
Posted by Rick Moen, a resident of Menlo Park: University Heights,
on Sep 18, 2017 at 11:11 am


Gale, you're remembering the storied Uncle Frank's BBQ & Catering, that was owned and operated by rural Louisiana native Will Griffin and was much beloved, but closed in 2010. You can still read the admiring Yelp reviews.


Thank you for the parking info and tips. I might give Castro Street another try.

I do miss good Texas-style smoked bbq. There are several good options (like Armadillo Willy's in Los Altos and Dickey's in Mountain View). I hope that this one is good and successful.

Report Objectionable Content
Posted by Good news, a resident of Greenmeadow,
on Sep 19, 2017 at 12:43 pm


I'm looking forward to eating here and it's a good addition to the Castro food scene. For really really really good BBQ I go to Trail Dust in Morgan Hill.

Report Objectionable Content
Posted by Friendly Neighbor, a resident of North Whisman,
on Sep 21, 2017 at 2:32 pm


I'm glad to finally see a BBQ restaurant on Castro to help add to the diverse offerings this popular street has to offer. The only thing that ticks me off as a resident is the lack of parking once again. I believe there will be some sigh of relief once the construction on St. Joseph's will be completed as I believe there is going to be (maybe underground parking) next to the church. Although this is a nice solution, it will be a walk back to the main strip (2-3 blocks).

Parking parking parking has been the achilles heel of this popular place and the issue doesn't seem to be going away or being solved anytime soon. None of the parking garages at CVC Pharmacy or even behind Amarin Thai help resolve this issue. Parking garages should be partially full even on a busy night to avoid having to circle around endlessly for a simple spot to park at. Seems like the best times to go are 1.5-2hrs before lunch/dinner in order to find a place to park and just wait it out until lunch/dinner is served.

Report Objectionable Content
Posted by Eater, a resident of Mountain View,
on Sep 21, 2017 at 4:23 pm


Friendly: "The only thing that ticks me off as a resident is the lack of parking"

Did you miss my earlier comment above? I'm a resident too. I very often park in downtown MV (in either the big parking structures, or the many mid-block lots you didn't mention), and have found it useful to pay attention to when that step becomes easier vs. harder. It's certainly not necessary to park "hours" before a meal -- for example I often park, walk right in to a restaurant, and rendezvous with others (I even recommended some real, proven lunch timings in the earlier comment).

Maybe in someone's fantasy world "Parking garages should be partially full even on a busy night" -- implying wasted, unused capacity most of the time -- but as a real suggestion, why not learn the rhythms and choose a just slightly different, less-crowded time, rather than insisting on parking during absolute peak demand and thus being part of the very problem you complain here about?

Doing more with the natural spaces we have
By Sherry Listgarten | 6 comments | 2,558 views