All four restaurants have been on the list for several years, except for Madera, which dropped off in 2015 but regained its star status last year. 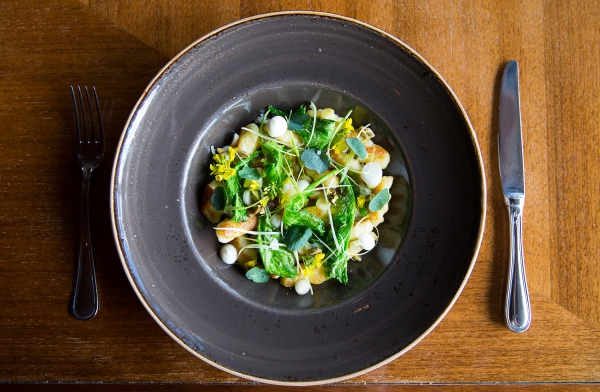 Yukon gold potato gnocchi with shaved truffles at Madera at The Rosewood Hotel in Menlo Park. Photo by Michelle Le.

Modern French restaurant Baumé remains the only Peninsula establishment to earn two stars, defined by the Michelin Guide as "excellent cooking, worth a detour; the personality and talent of the chef and their team is evident in the refined, expertly crafted dishes." Six other Bay Area restaurants earned two stars this year.

Manresa in Los Gatos persists as the only South Bay restaurant to make the guide's three-star category. (Globally, just over 100 restaurants currently have earned that distinction, according to Michelin.)

Chez TJ, The Village Pub and Madera each earned one star this year.

The Michelin Guide decided to postpone the release of the 2018 list, which was originally scheduled for the week after the North Bay fires started. In a release Wednesday, an executive said they hope the list will encourage people to dine in the region.

"America's wine country has experienced an extraordinary tragedy and our decision to delay the 2018 selections was made with deepest concern for those affected," said Claire Dorland-Clauzel, Michelin Group executive vice president of brands, external relations and the Michelin Guide. "This community is strong and resilient. We hope that publishing the Michelin Guide selections will contribute to the region’s recovery by encouraging travelers to visit some of the best restaurants in the country that are found here."

It's wonderful to see Baume again with two stars in the Michelin Guide. Bruno Chemel deserves this recognition for his exceptional cuisine and warm and friendly service. You may not get a view of Notre Dame but you get the same dining experience you'd get at the Tour d'Argent in Paris.


I get the point of the simile -- a unique memorable special-occasion experience. And congratulations again to chef Chemel!

But to quibble a little, Tour d'Argent is one of the very oldest operating restaurants in the world, certainly about the oldest in Europe; hasn't been representative at all of avant-garde high-end French cooking in recent decades; and is most famous for (besides popularizing the fork, a few centuries back) (a) pressed duck that comes with a serial number (a marketing gimmick that someone introduced there a few generations ago) and (b) one or more floors of its building consisting of a legendary wine collection from which the highly approachable, full-service sommeliers can humbly and agreeably satisfy most any taste, whether the customer has any wine experience or not. Those features all stood out in our experience of that restaurant, but they do not correspond with anything I hear about Baumé -- especially Chef Chemel's interest in exotic and even "molecular" gastronomy, whence his restaurant's very name. Also, Baumé's wine program seemed kind of cryptic when I inquired -- pairing flights only, or something like that.


Lots of children without enough food to eat, and when they do eat, it's junk because junk is more affordable than healthy food.

Hey, Palo Alto, why don't you solve this problem? Put a generous and practical plan into action before dining at Michelin restaurants. It is shameful to report on extravagances, and even more so to give kudos or quibble over kudos given to restaurants so few can afford to patronize.


This situation is no different from stadium events, operas, amphitheater concerts, etc. whose tickets cost three figures. Most "Regular People" can afford these special entertainments (and special-occasion restaurants are certainly a part of that category) from time to time, not every day. So if you want to look down at such things as "shameful," then follow the full logic of that position and argue that people should never spend their hard-earned money on entertainments or having fun, even occasionally. Actually it is the hospitality industry that has taken many original initiatives to help those in need. And when San Francisco was suddenly damaged in the 1989 earthquake -- when the North Bay cities were ravaged by fires recently -- it was independent special-occasion restaurants that fired up their kitchens and fed the hungry.

Report Objectionable Content
+   3 people like this
Posted by diego, a resident of Portola Valley: Portola Valley Ranch,
on Oct 28, 2017 at 5:22 pm


I agree with Diego, star or no star ...better places to dine.
Bistro Elan, Evia, come to mind.

Report Objectionable Content
+   7 people like this
Posted by Online Name, a resident of Embarcadero Oaks/Leland,
on Oct 29, 2017 at 12:11 pm
Online Name is a registered user.


Not too fear. Chez TJ and its cute house will soon be replaced by yet another boring office building whose murals tout the virtues of progress and the world of tomorrow.


Michelin stars mean a lot to the restaurants. But actually, are they worth such a painstaking work? I was working as a waitress in one of those in the period of spring 2016 till the end of summer this year. The only thing that I remember - obsession with the Michelin star.
Cheers,
Megan Kemp

Dehydrating for Backpacking and Camping
By Laura Stec | 2 comments | 1,316 views