After 22 years, John Bentley's to close

Uploaded: Dec 5, 2017
After decades in the restaurant business and 22 years of running his eponymous restaurant on the Midpeninsula, John Bentley will hang up his chef coat for the last time come this spring.

The longtime owner of John Bentley's plans to close his restaurant at 2915 El Camino Real in an unincorporated San Mateo County area near Atherton. Now 62, he said the time was right to retire and spend more time with family.

"I might start crying," he said in an interview last week, wearing chef whites and sitting at a table in the restaurant's upstairs private dining room. "This is really emotional for me. ... I have had just an unbelievable run." 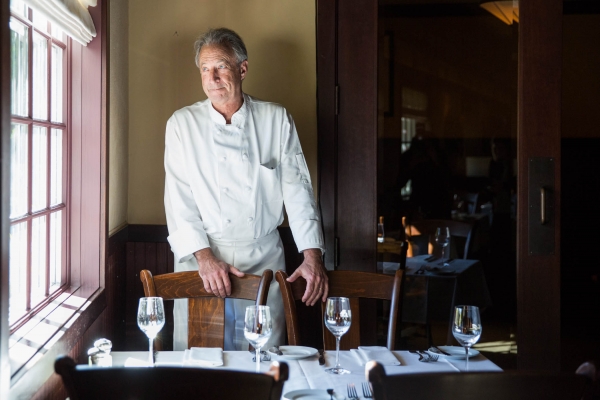 John Bentley in the dining room of his restaurant. Photo by Michelle Le.

Bentley said he and his wife "made a business decision" to sell the property two years ago, but leased it back to have some more time with the restaurant. The lease ends April 30, 2018.

He has not set a firm date yet but plans to shutter sometime in the spring.

Sunrise Senior Living Corp. has proposed to build a 90-unit residential care facility at the site.

Bentley opened the first iteration of John Bentley's in an old firehouse in Woodside in 1995. In 2004, he purchased and renovated the historic El Camino Real building, which had housed Fabbro's for nearly 70 years. He closed the Woodside restaurant six years later.

Bentley, who was born and raised in San Francisco, got his start as a chef there in the 1970s and 1980s. He attended the California Culinary Academy in San Francisco and worked alongside culinary household names such as Mario Batali and Joey Altman. He worked at a 42-seat, French-Viennese restaurant in the city called Lipizanner for years, working his way up from busboy into the kitchen.

On the Peninsula, he worked as executive chef at Michael's Restaurant in Sunnyvale and at the Los Altos Bar and Grill.

Bentley said he stumbled upon the Woodside firehouse in the 1990s and spent three months in a "protracted" interview process with the owners, the Gilbert family, to take over the space. He remembered writing 12-page papers on why he should be given the opportunity to run a restaurant there, cooking for the Gilberts and having them meet his family. Though he planned to name the restaurant after his daughter, Lee Ann Gilbert insisted that he call it John Bentley's. 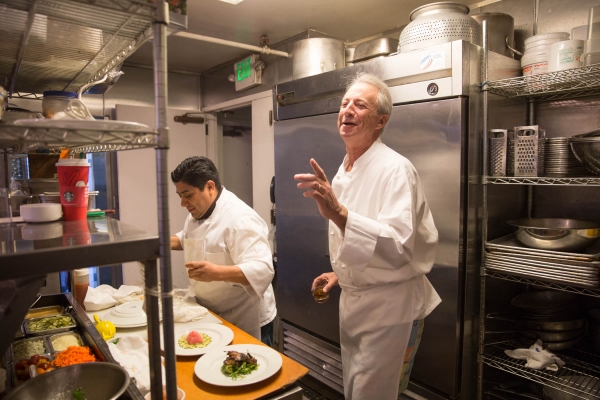 Bentley started his cooking career in the 1970s. Photo by Michelle Le.

He opened the restaurant in 1995 "with chicken wire and chewing gum" but soon found success. He was delighted when a diner called requesting a reservation in the "starlight room" the outdoor patio, decorated with string lights Bentley's mother purchased the day before the restaurant opened because he couldn't afford $800 to install real lighting.

"For a guy in the restaurant business, to bust your rump to get it open and hear nothing and then all of a sudden when you've finished cooking for the night and to hear that electricity, to hear the buzz coming off the dining room ... it was like magic," he said.

He said he told his staff about the impending closure of the El Camino Real restaurant as soon as the decision was made and none left. Some have worked for him for more than 20 years. Others have gone on to open their own restaurants, including Zu Tarazi, who with his wife Kristy Borrone took over the Woodside firehouse after John Bentley's closed to open Station One. (That restaurant has since closed.)

Bentley does not describe himself as a great chef, but rather a good restaurateur and people person.

He said this moment is bittersweet in many ways, but he's grateful for the space he's carved out in the Midpeninsula dining scene.

"What I think I'm most proud of here ... is that we use really good, honest product; we try to do as little to it as possible and, most importantly, we like to think that we serve it in a warm, unpretentious manner," he said. "That's what I feel best about."

John will be greatly miss for his fine dining in the Redwood City /Atherton area. You are always welcome with class and style. John is one of the most underrated philanthropic gentleman you will ever of met .. He never said know and helped me in any cause I worked for .. Good Luck John and the best of luck in your retirement
Alpio Barbara
Redwood General Tire

Report Objectionable Content
Posted by Terrye Bellas, a resident of Portola Valley,
on Dec 7, 2017 at 1:23 am


John has been a gem from the get-go. He has managed to somehow remain self effacing and humble in the unrelenting spotlight of one of the most fickle and quixotic industries on the peninsula. His restaurants, and most importantly, his place in our lives - looked at as a whole - have been way better than good! His impeccable attention to detail and unpretentious, out of this world delicious, yummy "real food" is, and always has been, unparalleled! From the moment you walk in the door you feel special and know you'll soon be enjoying a meal planned to satisfy your every fantasy. Not to mention the personal attention from his incredible staff. Over the years they have loyally remained with him (for good reason), when the norm in the industry has been less than stable. They continue to warmly welcome, assist and enhance your dining experience with knowledgeable, courteous, personal and attentive service.

John deserves a chance to smell the roses, but oh - how I'll miss my special visits to J.B's. He's irreplaceable!

Report Objectionable Content
Posted by Don McPhail, a resident of Mountain View,
on Dec 7, 2017 at 5:44 pm


Good on 'ya John! All good wishes to one of the finest chefs and restaurateurs in the business. As has been noted, John Bentley is one of the most generous, talented and humble people around. His generosity extends to promising acolytes whose greater skills tended toward fields like education or business, and guiding them gently back to school. His quiet support for nonprofits and underprivileged children has helped change lives. Thanks, John, for all you do.
Don & Gretchen McPhail, Mountain View, CA

Report Objectionable Content
Posted by Pam P, a resident of another community,
on Dec 7, 2017 at 5:50 pm


We started dining at John Bentleys when he was cooking in Woodside and we would sit on the terrace and enjoy a fabulous meal in a beautiful setting. I was a bit shocked when he moved to El Camino but we made the transition with ease and have been dining there ever since. We consider it a special night out. We enjoy it for birthdays and anniversaries, and when we have guests visiting from out of town. John, you are a class act. You will be sorely missed by your patrons of many years. Your servers are impeccable. Everything at your restaurant is near perfection. We are really going to miss you, but wish you all the best in your "next life." I wonder what you will do next.

Report Objectionable Content
Posted by Woodside high class of 89, a resident of Midtown,
on Dec 7, 2017 at 7:19 pm


John is absolutely a class act and a great guy, thanks for blessing so many!

Report Objectionable Content
Posted by MyOpinion, a resident of Community Center,
on Dec 9, 2017 at 3:09 pm
MyOpinion is a registered user.


Classy restaurant, great food. Hate to see it go. Happy retirement to Mr Bentley! We will have to make a few trips up there this winter!