Uploaded: Jan 7, 2018
At least one Peninsula cafe has decided to stop serving Four Barrel Coffee in the wake of sexual misconduct allegations made against the San Francisco company's founder.

"We are sad for everybody involved in this situation, especially the women who were victim to a toxic culture," Red Rock wrote in an Instagram post. "We will no longer be buying coffee from Four Barrel, and we hope that they as people and a company change for the better." 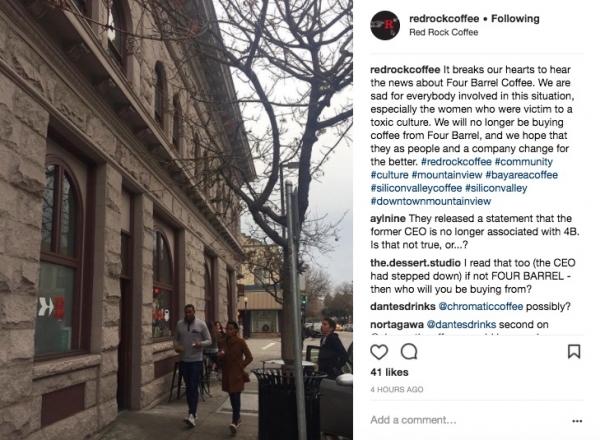 The San Francisco Chronicle reported on Friday that eight former female employees filed a lawsuit against Four Barrel founder Jeremy Tooker, alleging that he sexually assaulted and harassed several women and created a "toxic workplace culture" for women at the company.

The next day, Tooker's partners announced in an open letter that Tooker agreed to divest his ownership and "will not be affiliated with the company moving forward." He had withdrawn as CEO in November, partners Jodi Geren and Tal More said.

Tyler Toy, Red Rock's assistant manager and coffee manager, said in an interview Sunday that the decision was a "painful," difficult one.

Ultimately, however, he said: "We don't want to be complicit in a culture that has this sort of problems."

He said he was shocked by the accusations, especially given Four Barrel's reputation as a "progressive" company.

As of Sunday night, the Red Rock website was updated to reflect the change. A section that previously described Four Barrel as "a company that shares our values" was removed. 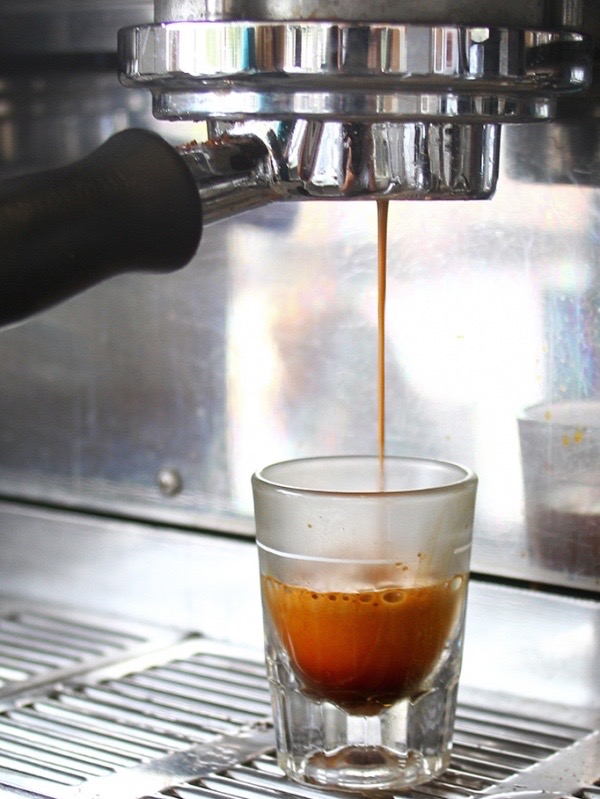 A shot of Four Barrel Coffee espresso is poured at Tin Pot Creamery in Palo Alto. Photo by Veronica Weber.

The owner of Bliss Coffee in Redwood City, which has served Four Barrel since opening several years ago, said that he's "torn" whether to continue serving the coffee.

Jimmy Huang said he's worked directly with some of the women quoted in the Chronicle article and believes their accounts. Some helped open Bliss, serving coffee and training employees. But he's worried about the negative impact the news will have on employees still working at Four Barrel.

"I'm torn right now," he said in an interview. "I don't want to contribute money and help the perpetrator profit off this but … Four Barrel is not just represented by this owner."

Huang was not satisfied by the two remaining partners' statement this weekend, which stated that Four Barrel "will not tolerate inappropriate behavior in the workplace" and "will continue to take prompt action to address any and all employee concerns, as we have done in the past."

"There are still some questions in people's minds, including myself," Huang said. "Did the other two owners know about it?"

The Chronicle reported that 10 sources stated both Geren and More "were aware of Tooker’s behavior yet did not address complaints in an official capacity."

Huang said he is waiting to hear what comes out of a company-wide Four Barrel meeting scheduled for Monday before taking any action at his own cafe.

The owner of Red Berry Coffee Bar in Los Altos said he will continue to serve coffee from De La Paz, which Four Barrel bought in 2013. He, too, was surprised by the allegations, he said, especially because the coffee industry is "pretty progressive about things like that."

Becky Sunseri, owner of local ice cream shop Tin Pot Creamery, which has a Four Barrel Coffee flavor and uses the coffee in affogatos, did not respond to requests for comment.

Other cafes have severed ties with Four Barrel in the wake, including in San Francisco and across the country, as others in the industry and customers debate how to respond.

By Monday evening, Geren and More announced that Four Barrel would be renamed and become an 100-percent employee-owned entity.

This swayed at least one wholesale customer: Huang, who said he's "going to stay with 4B (Four Barrel) and support the employees."


Ironies abound: Red Rock's website 'previously described Four Barrel as "a company that shares our values"' (which Four Barrel didn't at the time, apparently), while 'Red Rock's assistant manager and coffee manager said . . ."We don't want to be complicit in a culture that has this sort of problems"' (which it won't have anyway, if the Four Barrel management's new pledges hold truth; and yet, Red Rock *was* complicit earlier, unwittingly, boasting about "shared values" etc., when the claimed shenanigans were happening).

So this action by a coffee house is about perceptions, not realities. More deeply it's about marketing: Red Rock praising Four Barrel ("a progressive company") when the brand was hip, now distancing itself once the brand is "toxic." (Red Rock could now take advantage, as some restaurants do, of an independent firm that imports and freshly roasts its own excellent coffee beans just around the block -- "Dana Street Roasting" -- oh wait, that's also a competing coffee house.)

Meanwhile at Four Barrel Coffee, partners 'stated that Four Barrel "will not tolerate inappropriate behavior in the workplace" and "will continue to take prompt action to address any and all employee concerns, as we have done in the past" ' -- boilerplate HR-manual lines; readers may well wonder about the "continue" and "done in the past" parts in view of the Chronicle's 10 contradictory sources.


You can thank Donald Trump for starting the 21st century women's rights movement.

Report Objectionable Content
+   24 people like this
Posted by Nayeli, a resident of Midtown,
on Jan 8, 2018 at 2:20 pm
Nayeli is a registered user.


@BANNON - Oh please. As a woman, I find such obsession with the president -- and some need to bring him into every negative conversation ad nauseam -- to be toxic in terms of a desire to push any cause for which you are seemingly devoted.

Misogyny, sexual impropriety, harassment and presidential politics go back for more than a century and the most famous potential offender was the husband of the Democratic Party's most recent nominee.

Let's just agree that sexual harassment is wrong and allow due process to play its course. I'm as willing to do that with the dozens of Hollywood liberals as I am with local and national politicians or founders of coffee companies.


Consider the IQ of the person who posted this:

"You can thank Donald Trump for starting the 21st century women's rights movement."


Nayeli- you complain about the trump comment, but revert to the overused “but,but,but Clinton......" defense.
Pot meet kettle.


@ LOL. - I thought that you could readily understand the simple meaning behind my comment.

"BANNON" made a comment about the president from a story about the founder of a coffee company. He stated that you can "thank Donald Trump for starting the 21st century women's rights movement." I rhetorically rolled my eyes at the need to bring up the president in such an article. Then, I pointed out the hypocrisy of those who would attack THIS president while IGNORING the scandals of the husband of the most recent nominee from the Democratic Party.

In other words, I would pointing out the hypocrisy of "selective angst."


Nayeli---but,but,but....clinton. You are a roy moore supporter, I imagine.


I respect and admire Elena Kadvany's blog very much. That being said, this unfortunate situation is probably off-topic. Let's go back to arguing about how many parking spaces restaurants should have, and whether or not Palo Alto needs hamburgers ...