The Cost of Service

Uploaded: Jan 16, 2018
In a gently-lit room, there he laid: a man, seeking comfort in hospice after a long battle with terminal cancer. Oxygen tubes and intravenous ports were his markings of a deeply-human fragility. And there I was: a twenty-something volunteer, fresh out of college, having never spent one night in the hospital.

The man was unconscious, grimacing, unable to converse. But somehow, as I held his hand and stroked his forehead, he taught me something in his last days: the beautiful cost of servitude.

To be frank, though, I was not an apt student.

“Am – am I supposed to stay here for the next four hours?” I asked myself, trying to stop the man from unconsciously pulling out his IVs. It seemed an endless game we were playing: his hands shuffling down to where a port had been inserted, myself scrambling to bring the hands back to his chest, and repeat. We had only been doing this for several minutes, but I was tired. It was Saturday night; my week had been demanding; my future demands threatened to pull me apart. More than this, I questioned the value of my service. All the hand-holding, the presence, the time – was it worth it? 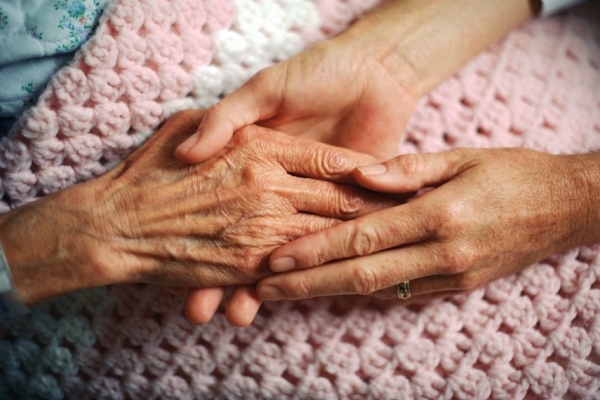 When I first began hospice work, I held a somewhat naïve perspective. I imagined myself sitting with dying patients, and guiding them towards self-actualization at the end of life. I would console suffering persons with profound insight, and enliven the dying with healing wisdom. A laudable and rewarding endeavor, indeed: Service, at its highest.

If you had walked into that gently-lit room you would have seen a young man, lending quiet compassion to a tired soul. But, just beyond your vision, something else was happening. That young man was wrestling with the very idea of service – of rewarding work, when the reward is unclear. As he stood over painful expressions and struggling groans, his idealism had faded. There were no hyper-transcendent realizations, no profound metaphysical moments. Only two strangers in the dark, draped in life’s awkward authenticity.

So, as I tried to make this unconscious man’s death a tad less frightening, a bit less painful, I was forced to ask: “Am I even helping? Is my presence doing anything? Is this – worth it?” Those questions, particularly the last one, illuminated the crux of my
position.

There are few things in life which humans cannot turn into vanity, and service is no exception. While pursuing “altruistic” endeavors, we often give ourselves instead to pride and self-service. Where values and love were intended motivations, reward and satisfaction permeate our thoughts.

We see this in countless arenas: from philanthropists obsessed with public image, to high-schoolers hoping to bolster their college applications. In these cases, service becomes not an act of loving humanism; service devolves into pragmatism. Those whom we serve become characters in our own narratives. Genuine service connects individuals and builds communities; but reward-based service erects monuments to misplaced purpose.

So, as I stood over this dying man, I was asking all the wrong questions. My inquiry was self-centered, my thoughts concerned with personal satisfaction. Of course, joy and fulfillment matter, but my perspective was veering where it did not belong. All the while, as my focus shifted toward service itself – and away from those whom I serve – a dying man was becoming a character in my own performance.

Service is undoubtedly rewarding; but we must not, we cannot, begin with that reward in mind. Reward, satisfaction, and fulfillment are gifts of reflection – if compassion truly drives us, we must drop them at the starting line. Our critical questions are not those of value, but of values: Why do we serve? Is our service in line with those motivations?

And most importantly: Are we willing, not to receive any reward, but to pay the redeeming cost of service?

This all sounds a bit dramatic. But through hundreds of hours spent with those who suffer – through writing and hospice work – I find honest reflection necessary. Revealing true motivation keeps us accountable. It frees us to no longer hunger after reward, but to humbly accept the cost of service: Time, energy, applause, and comfort.

Avoiding masochistic carelessness, these (and more) must be sacrificed for anyone claiming to serve. From physicians to social workers, values must drive us. Not in hopes of return on investment, but simply because it is the right thing to do. In an individualist culture, that cost might seem foolhardy. But for those called, time and comfort are worthy exchanges for the privilege of bearing another’s burden.

When my supervising nurse walked into the room, I was still wondering what time it was. I wondered how much longer I would be hunched over, and what was for dinner that night. The nurse came to the bedside, taking the patient’s hands in hers. She checked his oxygen; examined his body; and slowly walked his hands back, each time they reached toward an IV line. There was no hurry, no begrudging sigh, no self-worship.

What I saw in that moment was a servant of the dying, living out her values. What I did not see, was any outside applause or increased salary. Even the patient himself could not thank her.

But this woman needed no reward, no outside contribution. She had taken on the cost of service, and that was all she needed.

Aldis, I think you did the best you could in this situation. Thank you for supporting those in hospice.

Report Objectionable Content
Posted by Eddie J., a resident of Charleston Gardens,
on Feb 7, 2018 at 11:09 pm


We see this in countless arenas: from philanthropists obsessed with public image, to high-schoolers hoping to bolster their college applications. In these cases, service becomes not an act of loving humanism; service devolves into pragmatism. www.myhomeshoppingnetwork.com Those whom we serve become characters in our own narratives. Genuine service connects individuals and builds communitie

Report Objectionable Content
Posted by punjabi Song Lyrics, a resident of Cuesta Park,
on Feb 10, 2018 at 3:01 am


Amazing job Done!! Thanks for being kindful to other!

Report Objectionable Content
Posted by sdafjdskajf, a resident of Atherton: Lloyden Park,
on Mar 31, 2018 at 6:16 am

How we eat away at our open space, even in Palo Alto
By Sherry Listgarten | 5 comments | 7,375 views

Three new restaurants from former Manresa chef David Kinch and his team are coming to Los Gatos
By The Peninsula Foodist | 2 comments | 4,531 views