Onigilly, which got its start as a food cart in San Francisco in 2010, serves its own version of onigiri, or Japanese rice balls. Owner Koji Kanematsu took over 164 University Ave. after ice cream shop Creamistry closed earlier this year.

Kanematsu started Onigilly after being frustrated by the lack of casual, healthy fast-food options while working in San Francisco. (This was in 2006, pre the explosion of fast-casual restaurants that are now commonplace.) He also craved onigiri, which he said he ate almost every day when he lived in Japan but couldn't find in San Francisco.

After some fits and starts, including serving homemade onigiri to roommates and then at a coffee shop in San Francisco, he was accepted into La Cocina, a San Francisco incubator for low-income food entrepreneurs, particularly women of color and immigrants.

With La Cocina's help, Kanematsu got a food cart and later, his first brick-and-mortar location. But business was challenging, he thought because onigiri's traditional proportions — about 80 percent rice and the rest fillings such as chicken teriyaki — were too much rice for Americans.

He shifted to a "sandwich style" onigiri with less rice. The fillings are stuffed between two triangular wedges of rice, then wrapped in seaweed. 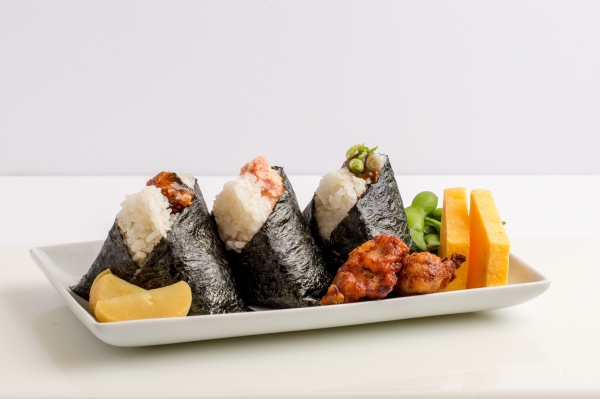 Onigilly uses organic, 50-percent milled brown rice. For the fillings, there are meat, seafood and vegetable options, from ginger-honey braised ground beef and miso tuna salad to spicy pickled mustard greens. Each onigiri is made to order.

Palo Alto will be Kanematsu's fifth location, joining four others in San Francisco. Palo Alto will be the only location to serve dinner and be open on weekends. Eventually, there will also be sake and beer.

His "mission" is "to improve the fast food culture" in the United States, with grand plans to open 500 locations across the country.

What happened to Verve coffee? I thought they were moving into that space?


Jerry: That was totally my error. Onigilly is opening at 164 University Ave., next door to the Verve space. Thank you.


We've been to their cafe in San Francisco. The rice balls are good, but super expensive compared to the similar fresh rice balls at Japanese grocery stores. I think they make almost all of their profits through tech company catering, which maybe is their plan here too. Or maybe since Asian markets are apparently not allowed in Palo Alto, they may get some retail sales as well.

What to do if you get a noisy Rheem/Ruud heat pump water heater
By Sherry Listgarten | 4 comments | 2,319 views

Do Palo Alto city officials ever, ever have enough money?
By Diana Diamond | 8 comments | 1,334 views