The Courthouse 2021 opens in Redwood City

The Courthouse 2021, described on its website as an "American farm-fresh restaurant" is set to open at 2021 Broadway St. in Redwood City in early April.

The owners brought in Munther Massarweh as a consulting chef. Massarweh owns three restaurants in Novato and Nico's 1508 in Berkeley and consults with other Bay Area restaurants. He has worked at several local restaurants, including in San Francisco and Glen Ellen, and was also the youngest-ever executive at Chicago's famous and now-closed Pump Room, according to a press release.

The Courthouse 2021 dinner menu is wide-ranging and long. Appetizers range from lobster bisque and duck confit to a firecracker tuna roll and double-smoked potato skins. An entire menu section is devoted to wood-fired dishes that will be made in a "dramatic" oven on view in the dining room, the release states. 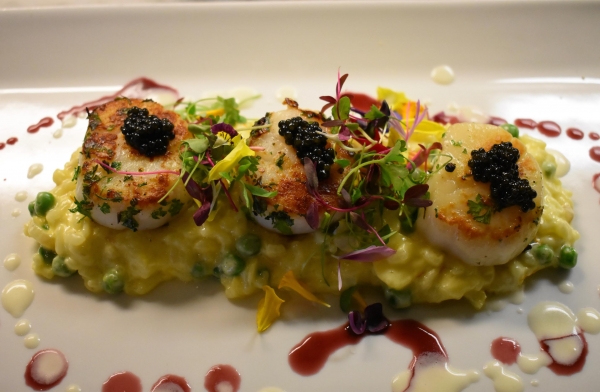 Entrees, which range in price from $16 to $65, are split into "hoof," "sky" and "sea" sections. There's mesquite-grilled steaks, wood-roasted whole fish and roasted cornish game hen, among other dishes. At the highest end of the menu is a 32-ounce, bone-in prime ribeye that has been wet aged for 35 days. It's served with a bourbon-bone marrow reduction and truffle oil for $65.

There's a full bar, so expect cocktails, international wines and local craft beer. Cocktails play up the courthouse theme with names such as "Hung Jury Manhattan" and "Moot Point Margarita." There will be a happy hour Monday through Friday, 3-6 p.m. with discounted small plates and drink specials.

The restaurant will serve brunch on weekends later in the spring.

The space was designed by Michael Brennan, who is behind Cliff House, Jardinière and other San Francisco restaurants. Courthouse 2021, named for the actual, nearby city courthouse, is "evocative of a law library," the press release says, with a fireplace, leather-paneled walls, wrought-iron light fixtures and chandeliers and wood-topped tables. A large, outdoor, heated patio has room for 75 diners.


The name Courthouse seems kind of misleading to me ... It may lead to confusion ...
so someone may ask for directions to the courthouse and they will give him the restaurant -- and vice versa ...


Oh no, I'm so confused. A restaurant named Courthouse? How will I know where to go for jury duty? I know, I will ask people in the street. But what if they have been mislead by the names of things? I'm never going outside again.


While I'm not finding the headlines, I'm positive that a lot of people in Saratoga are getting misdirected to a cocktail bar when they inquire about "The Bank."