Vin Vino Wine, a fixture of the local wine community, has been sold. While regular customers of the beloved, bare-bones 437 California Ave. shop have likely been aware of owner Victor Pugliese's intention to retire for several months, he officially announced the sale in a monthly newsletter. His lease expires at the end of April.

Pugliese sold Vin Vino Wine to the above-mentioned chef, sommelier and accountant, respectively: Guillaume Bienaime of downtown Palo Alto French restaurant Zola; Lisa Robins, formerly of Howie's Artisan Pizza in Palo Alto and Marché in Menlo Park (where she and Bienaime met); and Alecia Blazei, who is both Bienaime and Robins' accountant. Blazei and Robins met working at Howie's. Blazei also worked at Martella Winery in Woodside for 13 years. 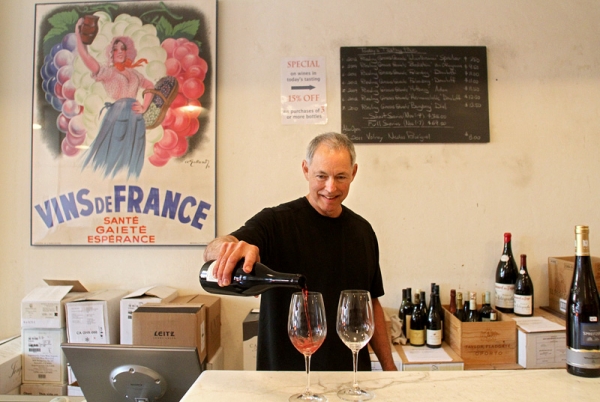 Victor Pugliese, owner of Vin Vino Wine, pours a glass of a Volnay 2011 Burgundy in 2014. Photo by Veronica Weber.

Vin Vino Wine's last day of business with Pugliese as owner will be this Saturday, April 14. The shop will close temporarily while the new owners renovate the space. They plan to keep the name and buy the existing inventory, but make some additions, Bienaime said.

"I think the energy that the new ownership group will bring is exactly what VVW needs at this point in its life," Pugliese wrote in Vin Vino Wine's April newsletter. "Lisa, Guillaume, and Alecia are brimming with enthusiasm about the future of the business. I am confident they will work to preserve those things you love about VVW, at the same time they experiment with new wine categories, new programs, and new marketing concepts."

Pugliese first opened Vin Vino Wine in 1985 in a 440-square-foot space on Cambridge Avenue in Palo Alto. He was a 30-year-old Stanford University business school graduate with a passion for wine. Four years later, he moved to the current location, which offers a daily tasting bar.

"From the beginning, I had a tasting bar to let patrons tell me what they liked," he said in a 2014 Palo Alto Weekly story. "Some of those customers are still regulars. It's not a classic wine bar, more wine geek oriented." 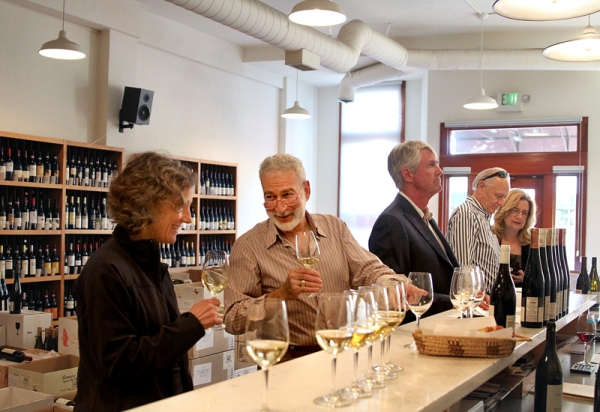 Leo Kadejian, who has been a customer of Vin Vino Wine for over 25 years, talks with Susan Buchanan, a customer of over 20 years, as they taste German Rieslings in 2014. Photo by Veronica Weber.

Pugliese described Vin Vino Wine as particularly focused on wines from Burgundy, with about half of its inventory from France. There is about 15 percent each of Italy and California wines. He also carries "carefully chosen" wines from regions including Spain, Australia, Oregon and New Zealand, the shop's website states.

"Our goal is to provide our clientele access to the most interesting, highest quality wines available in the marketplace at each price level, from the very reasonable to the very rare and collectable," the website reads. "The result is a heavy bias towards passionate, small-scale producers over commercial mass market ones, because that's where we find the greatest wines and the best values."

Bienaime has been a customer of Vin Vino Wine for almost 15 years. When Pugliese told Bienaime several months ago that he was looking to sell, Bienaime said he was intrigued but didn't have the right partners at the time. Then he heard Robins was looking to get out of the grind of the restaurant business. He mentioned the wine shop to his old boss, Howard Bulka of Howie's Artisan Pizza, who told Robins. Blazei, who is also Bulka's accountant, happened to overheard the conversation. A partnership was born.

Bienaime said they plan to continue the "tradition" of Pugliese's Vin Vino Wine in both its retail offerings and spirit.

"We will obviously be bringing our own wine sensibilities, preferences and likes to the purchasing as well, which will be grounded in what he did with addition of a little New World as well," he said.

They're doing some minor updating to the space and will be adding a separate tasting room for private events, wine classes and new winemaker events. They're not planning on serving food yet, but it's not off the table, Bienaime. Cheese or charcuterie plates, which wouldn't require cooking, are a possibility.

Robins, who has been working in the shop for the last month, will oversee the day-to-day, Bienaime said. The newsletter describes her as "a relapsed Burghound who has been cheating with Italy for the last few years, and is excited to return to the fold."

Bienaime said they hope to reopen the shop in mid-May.

In Pugliese's announcement, he urged customers to support the new owners.

"Beginning in May, in an important regard, the ball will be in your court. Make a point of supporting the new regime, and help them get off to a solid start. Come in to taste and buy as you have in the past, especially during the slower summer months. Make friends with the new team, and give constructive criticism," he said. "We all want the new Vin, Vino, Wine to be a resounding success."

On Sunday, April 15, the shop is hosting a "La Pauleé style" event -- a reference to a French festival tradition held at the end of the grape harvest -- to "celebrate 33 years of Vin Vino Wine" from 2-5 p.m.

The price of admission? "A bottle or two purchased from VVW, to share with everyone else," Pugliese wrote.

For more on Vin Vino Wine's history, read this essay Pugliese penned in the March newsletter.

Congratulations to Victor on his retirement!

I am optimistic that the new ownership team will succeed in adjusting to changing times and preferences without losing their entire connection with the established clientele.


It is wonderful news that VVW will continue on into the future, especially with the loss of so many longstanding and outstanding local institutions in recent years (e.g., Beltramo's, the Oasis, Roger Reynolds, Keeble and Shuchet, etc.). This place fills a wonderful niche by offering the ability to taste before you buy while hanging out with other wine geeks (it does trend towards being a bit of a pub for the 1%, but welcome to Palo Alto). In addition, the wine selection is so well screened and selected that there is nothing in the shop that is isn't outstanding (something you can't say for your Total Wine sort of mega stores).
Many congratulations to Victor on a job well done and best wishes to the new management team.

Report Objectionable Content
Posted by Stephen, a resident of Duveneck/St. Francis,
on Apr 16, 2018 at 8:34 am


I hope that they continue to handle some of Kermit Lynch's imports like the fine Bandols from Domaine Tempier.

Report Objectionable Content
Posted by Los Altan, a resident of another community,
on Apr 16, 2018 at 7:10 pm


I would like to encourage the new owners to change the name to something a little more interesting. How about Vino! Vino! Vino!


Hey Elena, any word on the new Ramen place in downtown PA? Sounded like a great addition to the eating scene there.

Report Objectionable Content
Posted by Elena Kadvany, a resident of another community,
on Apr 19, 2018 at 1:26 pm


Hi Anne: It's still under construction, as far as I know. I will write a story as soon as I hear it's opening!

Report Objectionable Content
Posted by Wondering, a resident of Charleston Gardens,
on Apr 19, 2018 at 5:53 pm


To Elena:
... And whatever happened to The Chickery?

Report Objectionable Content
Posted by Elena Kadvany, education reporter of the Palo Alto Weekly,
on Apr 20, 2018 at 7:57 am
Elena Kadvany is a registered user.


Wondering: I've checked in with the company a few times and they had not yet set an opening date, despite a December press release that stated the restaurant would open at the end of January.


I ‘ve known Lisa Robins for most of her life. Her father, John, was the operations manager at Beltramo's for decades before he became an electrician (with a master's degree in history). Lisa has grown up learning about what makes a wine worth buying, and has also worked as a sommelier in some high end restaurants. She knows her stuff. I don't know the other partners, but I know that having Lisa involved means that there are good things in store for Vin, Vino Wine.

Report Objectionable Content
Posted by Richard, a resident of another community,
on Jun 11, 2018 at 1:45 pm


In my mind, VVW has always been the single wine shop where, “There's no junk." I hope thatt ethic will continue.


Report Objectionable Content
Posted by Robert Gilchrist Huenemann, a resident of another community,
on Jul 2, 2018 at 3:05 pm


Most of what little I know about wine, I learned at VVW. I will believe that the old standard is being maintained as long as I hear that the hours will remain the same. Best wishes to you, Victor.

State Street Market plans overhaul of its eateries as it cuts ties with Bon Appétit, triggering layoffs
By The Peninsula Foodist | 11 comments | 3,994 views

Doing more with the natural spaces we have
By Sherry Listgarten | 6 comments | 2,565 views