Photo Overload: Can SmugMug & Flickr Help Your Pictures Stand Out?

Uploaded: May 26, 2018
In 2002, Don MacAskill and his father Chris started SmugMug. I was somewhat skeptical when they first entered the already crowded world of photo-sharing sites. Knowing Chris from working with him at General Magic I was sure good design would prevail. Design is one of SmugMug’s advantages. FYI, General Magic was described in a 2011 Forbes article entitled “General Magic: The Most Important Dead Company in Silicon Valley?” and a movie about it will be heading to the West Coast before long.

SmugMug recently acquired Flickr from Verizon’s Oath which was acquired from Yahoo!. SmugMug charges anyone posting pictures a subscription, unlike Flickr which has a free option. This has enabled SmugMug to grow as a family business without venture capital. It's unfortunate that our culture tends to shy away from nepotism, as a dedicated, successful parent, nurturing a child’s business can create meaningful jobs.

I first wrote about SmugMug, 10 years ago, less than a year after the iPhone was released. Comparing the original iPhone with today’s iPhone 8 Plus, the image sizes are over 6 times larger, going from 1600 x 1200 pixels to 4032 x 3024 pixels, and maximum storage has gone from 16 GB to 256 GB. Smartphone cameras and apps enhance photographs, create stunning portraits, blend elements, make videos and augment reality.

It’s too early to say how Flickr and SmugMug will work together long term. Flickr will still offer a free option - that could strain profitability going forward. Currently Flickr only offers one paid option, Flickr Pro, whereas SmugMug offers more paid choices so that pros can set up branded stores and workflows. Flickr users want their platform upgraded. Don MacAskill, SmugMug’s CEO & Chief Geek, in a Reddit discussion, indicates he wants to give photographers world-class community experiences, so they can go on photowalks, share ideas and critique each other’s work, prioritizing passion over volume. He’s interested in fighting spam and improving uploading for Flickr, as well as his #1 priority - getting rid of the Yahoo! logins.

How does one stand out from the crowd and get viewers to like, or even buy your pictures? However good SmugMug and Flickr are at sharing, retrieving and displaying photos, and however good Apple, Samsung, LG, ZTE, Xiaomi and others are at making smartphones, the photographer still needs care in selecting and composing photos.

Community feedback is one way to create better photos. Sometimes one needs more than a Facebook “Like” or “HaHa”. SmugMug has always been about the photographic community - not just online. Years ago, at a SmugMug event, I met Marc Silber, an award-winning photographer who now lives in Carmel. Marc shares his craft on silberstudios.tv. His book “Advancing Your Photography: Secrets to Amazing Photos from the Masters” takes you through the main steps in photography: Visualization - Equipment - Capture - Processing - Sharing. 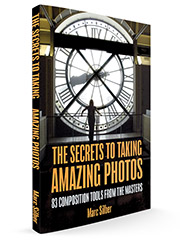 (Book cover: Source: Marc Silber)
His latest book, “The Secrets to Creating Amazing Photos: 83 Composition Tools from the Masters”, focuses on composing pictures. Many of the 83 ideas come from art. Common techniques like using a path to draw the eye into a picture or a using foreground branch to frame a landscape will be familiar. For example, Flemish art shows windows through which light can shine to illuminate a subject. Rembrandt was fond of triangles. The book teaches you how to convey the mood of a photo. Color photos and hints illustrate how to use each technique.

Marc has led photography workshops with Ansel Adams’ son and discussed composition with photographer Edward Weston’s grandson Kim. Such is the power of building community between photographers.

I wish SmugMug well as it fosters photographic communities and gives Flickr employees a creative home.

Warsaw Realtor is a registered user.


We used one of flickr's paid plans for the longest time to store and catalog our real estate images. It worked really well for a while but ownership kept changing hands which meant plans and rate would change as well. We eventually found that dropbox or google drive worked just as well for our needs.

Mountain View's Castro Street opens up for an eat-and-greet to rally support for businesses
By The Peninsula Foodist | 0 comments | 1,661 views

The questionable morality of abortion
By Diana Diamond | 7 comments | 1,580 views