Uploaded: Jun 14, 2018
"No, this is not a 404 error. Yes, this is for real," reads a sign announcing the newest outpost of Boba Guys, a popular San Francisco milk tea chain, at Town & Country Village in Palo Alto.

Boba Guys started as a pop-up in 2011 and has since attracted a serious following, with locations in San Francisco, San Carlos, Los Angeles and New York. The Palo Alto outpost will be located between Tin Pot Creamery and CVS at the 855 El Camino Real shopping center. 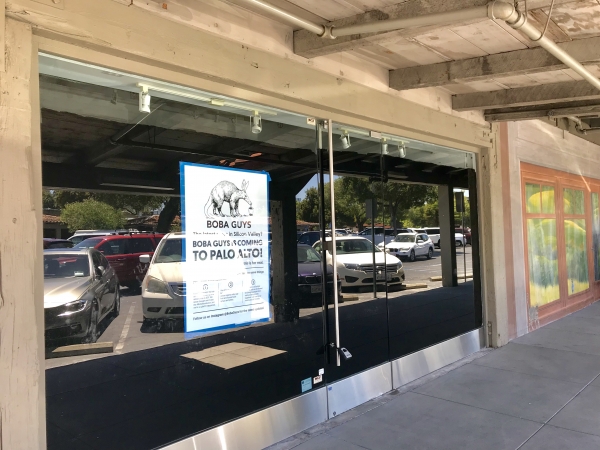 Bin Chen and Andrew Chau started Boba Guys together after their favorite milk tea shop closed. Having grown up on boba made with powders and non dairy creamers, they wanted to "change the way people thought of boba and tea."

"Appreciation for craft and quality are evident in other industries such as coffee and wine," they write on the Boba Guys website. "We want to do the same for boba."

In this vein, the Boba Guys website explains the ingredients in its drinks and addresses some burning questions, including "Why are your drinks so f---ing expensive?” (quality, sourced ingredients) and "Why do you [fill in the blank? That's not authentic. You are boba for white people. I don’t trust boba made by someone who isn't Asian."

Chen and Chau write that while Boba Guys "never claimed to be traditional milk tea," it is authentic.

"We are true to ourselves as Asians and Americans. We try to bridge cultures by making boba and tea more accessible," the website reads.

The owners are also outspoken on social issues, speaking out after the 2016 presidential election and ending their partnership with Four Barrel Coffee after the company's founder was accused of sexual misconduct.

In an email, Chau said Palo Alto is one of the cities customers most frequently ask them to expand to. They actually pursued a location downtown two years ago, but it fell through. (The expansion is also personally significant for Chau, who got married at the Garden Court Hotel on Cowper Street.)

He anticipates Palo Alto to be a high-volume, family-focused location and said the relatively small space will "be one of the largest kitchen setups we've ever done."

Every Boba Guys location is slightly different and the menu is "ever-evolving," but it always includes iced and hot milk tea, from the classic Jasmine green tea to horchata, matcha latte, cold-brewed coffee and seasonal flavors. Customers can customize the sweetness, toppings and type of milk.

Boba Guys will enter a crowded boba field in Palo Alto, where there are at least five shops already.

Chau said they're opening to open sometime this fall.


I love Pop Tea Shop on Cambridge Ave. I'm sure the Paly kids will keep this new one in the black.

6 Steps to master the home buying process during a pandemic

Your no-stress guide to buying a home no matter what the circumstance.

Are our recycling bins too big?
By Sherry Listgarten | 14 comments | 2,804 views

I am Voting Yes on Measure RR to Provide Caltrain a Dedicated Revenue Source
By Steve Levy | 5 comments | 1,653 views