The Michelin Guide announced its much-anticipated stars for 2019 on Thursday.

Protégé arrived on California Avenue this March with high hopes and expectations to match, with co-owners who hailed from three-star The French Laundry in Yountville. Dennis Kelly was the restaurant's sommelier and Anthony Secviar, a chef. Pastry chef Eddie Lopez also trained under The French Laundry's chef Thomas Keller. The owners created what they hoped would be an approachable yet impressive neighborhood restaurant with a more casual a-la-carte lounge and tasting-menu dining room. 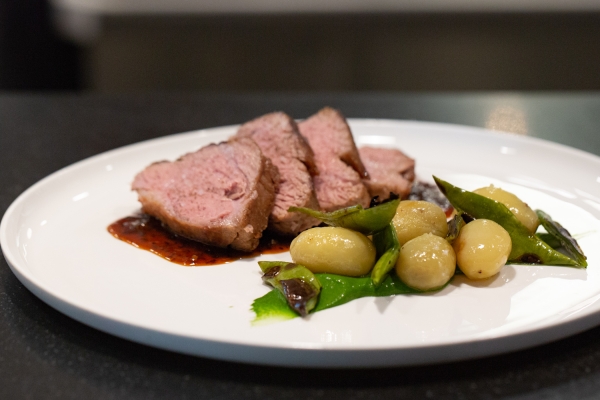 "We are floored," Secviar wrote in an email shortly after the stars were announced.

"Having grown up admiring Michelin-starred chefs and working in a number of starred establishments you'd think that from an egotistical perspective I would crave the recognition, but after opening Protégé I can honestly say I’m more happy for the team and the recognition they get from all of their efforts."

In an announcement, Michelin wrote that Protégé "displays a level of finesse to prepare consistently excellent meals, while the dining experience remains casual and approachable." A post on the Instagram account for the anonymous Michelin inspectors lauded a specific dish: "Nothing but technique in this poached hen egg nestled within a pastry dome & surrounded by a moat of Parmesan foam."

The much sought-after award "goes a long way in validating our efforts and reaffirms our belief that we are on the right track," Secviar said. (Read more about the power of the Michelin star here.)

Protégé is one of five new one-star distinctions in the 2019 Michelin guide and the only one south of San Francisco. 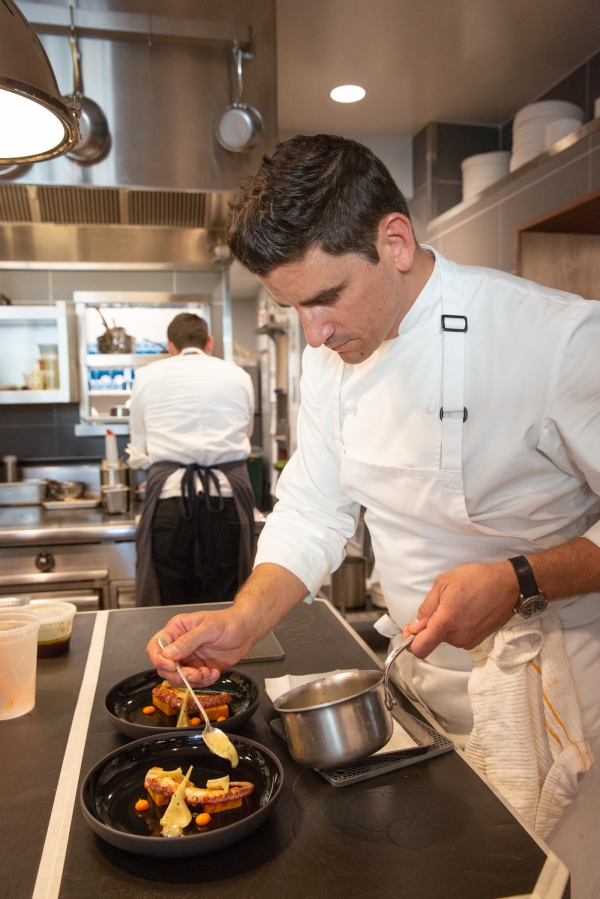 Anthony Secviar, chef and owner of Protégé, puts the finishing touches on a dish. Photo by Natalia Nazarova.

The Michelin guide defines one star as "high quality cooking, worth a stop;" two stars as "excellent cooking, worth a detour;" and three stars as "exceptional cuisine, worth a special journey." The stars are based on five criteria, according to Michelin: quality of ingredients used, mastery of flavor and cooking techniques, the personality of the chef in the cuisine, value for money and consistency between visits.

Other Peninsula restaurants who have won in past years held onto their stars in the 2019 guide, including Protégé’s across-the-street neighbor Baumé, which again won two stars.

Manresa in Los Gatos again earned three stars and Chez TJ, The Village Pub and Madera, single stars. Other South Bay winners include Wakuriya and Sushi Yoshizumi in San Mateo, Rasa in Burlingame and The Plumed Horse in Saratoga (all won one star).

The Bay Area is now home to eight three-Michelin-starred restaurants, the most in the United States. Gwendal Poullennec, international director of the Michelin Guides, described the San Francisco dining scene as "booming at the moment."

***CONGRATULATIONS!!! Well deserved! From the very first bite, I had no doubt that this incredible new restaurant would achieve Michelin-star status.***
What makes Protege outstanding is that the incredibly prepared food is equally matched with impecable service, and Dennis is great at making anyone feel like a VIP. Getting a reservation may be tough, but parking is no problem - there's a huge public parking lot immediately behind the restaurant. Bon Appetit!


This is an incredible achievement for a restaurant that has been open for less than a year. Wow! So well deserved! My wife and I have eaten there 4 times, and each meal has been fantastic. The service is as good as the food. We are so lucky to finally have a restaurant like this in Palo Alto. If you have not eaten there, go now!!!!


Dennis Kelly is the best. We were in his class at Court of Master Sommeliers and he is so engaging and knowledgeable. Congrats, Dennis!

Report Objectionable Content
Posted by Megan , a resident of Professorville,
on Nov 30, 2018 at 11:55 am


Protegé is a true treasure to Silicon Valley. I choose my meals out carefully and I have been blown away by Chef Anthony Secyiar's incredible creations and Master Sommelier, Dennis Kelly's rich and unique cellar. If you have one night in Palo Alto- go to Protegé!


Protege is the first restaurant to excite me in years. The space is beautiful and food is inspired and perfectly prepared. I dream of the ricotta dumplings! Protege well deserves the Michelin honor.

Report Objectionable Content
Posted by Despite certain Palo Alto residents...., a resident of Embarcadero Oaks/Leland,
on Nov 30, 2018 at 3:51 pm


Great news. Congrats. But let us not forget that this restaurant alsmost never came to pass :

We can thank Jeff levinsky, Rita vrhel, Nelson Buchanan and council members Dubois, kou and Holman (naturally) for almost sinking this endeavor.
Thank goodness the owners were willing to put up with the Palo Alto process and get this place opened.


Cal Ave is weird little spot. Seems like it is going places... great article....barron park on El Camino needs a little of that....

Report Objectionable Content
Posted by Screwed up city, a resident of Downtown North,
on Dec 1, 2018 at 1:24 pm


This place is a perfect example of dysfunctional palo alto. The city doesn't want chain stores and wants mom and pop places. But when one tries to open they make their life hell by allowing self appointed neighborhood activists to hijack the process with their nitpicking ( the wall is one inch to high, the building design does not look historic enough, they are a parking space short etc). Time for the city to take back control from levinsky et al


I have not yet eaten at Protege (a bit out of my price range) but my comment is about the critics who don't post their names, but hide behind pseudonyms. I can't imagine folks would harass those who express their opinions in a courteous way. We are all neighbors and I like to read the opinions of others. Just sayin'

Report Objectionable Content
Posted by Concerned Realist, a resident of College Terrace,
on Dec 20, 2018 at 4:14 pm


First, congrats goes out to Protege for this outstanding accomplishment.

Second, kudos to the citizens who recognize what is really happening in Palo Alto: a very few extreme activists (led by Jeff Levinsky) control the political agenda (with the blessing of certain City Council members) and wrongfully use (abuse) the City process to torture bystanders (like Protege) for the supposed sins of the past. Instead of being an obstructionist, why not participate in a positive way to address the things that are broken? Protege was delayed by over a year by Levinsky and crew, almost causing the Protege owners to give up; it would have been a sad and unnecessary loss for Palo Alto and the area.

Report Objectionable Content
Posted by Common sense, a resident of another community,
on Dec 26, 2018 at 3:37 pm
Common sense is a registered user.


The new (January 2019) issue of AAA's travel magazine "Via" also chose to highlight this restaurant (with good food photo), as emblematic of local restaurant trends, in an article about Palo Alto: Web Link

Doing more with the natural spaces we have
By Sherry Listgarten | 8 comments | 2,901 views

Can the Memphis police behavior ever happen here?
By Diana Diamond | 11 comments | 812 views