Uploaded: Dec 17, 2018
Four years ago, Michael Biesemeyer stood outside Flea St. Cafe in Menlo Park and told a server, "Some day, I'm going to own this place."

And now, owner Jesse Cool has brought in Biesemeyer, a former captain-server, as managing partner and co-owner for the longtime farm-to-table restaurant at 3607 Alameda de las Pulgas.

Cool has been searching for the right partner to take Flea St. into its next phase after nearly four decades of business. She had hoped her last chef, Charlie Parker, who grew up steps from the restaurant, would be that person, but he left the restaurant in July. She also brought in her prior chef, Carlos Canada, as a business partner, but he ultimately left to work for a catering company.

Cool is hopeful that Biesemeyer, who worked as a server and front-of-house manager at Flea St. for almost a decade, will be a long-lasting leader for the restaurant.

"Michael feels like he belongs in Flea St.," Cool said. "Instead of selling it to someone who didn't want to continue Flea St., I'm passing it on to the community, (to) someone who cares about our guests and deeply cares about the core values of Flea St." 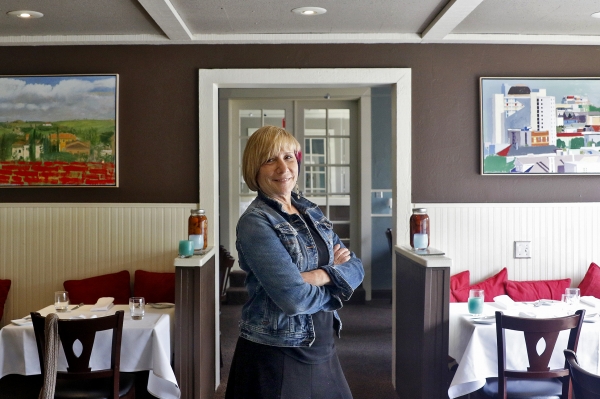 Biesemeyer left Flea St. in February to work at Protégé in Palo Alto, which recently earned its first Michelin star. There, he was a captain, a leadership role tasked with overseeing the other waiters.

Cool could have sold the restaurant (there was an interested buyer, she said) but instead signed a new 10-year lease with Biesemeyer. She opened Flea St. in 1980 and isn't quite ready to let go, though she's eager to step back from day-to-day operations.

She said she's confident Biesemeyer will maintain the best parts of Flea St. and change little. He does plan to expand the private dining program and has hired a manager to head up that effort, Cool said.

He's also bringing back some of Cool's old recipes, like the "which came first, the chicken or the egg?" — a poached egg with chicken in some form, currently fried chicken with a honey-vinegar glaze, served with a potato-kale salad. He's reviving crystal plates Cool used for desserts years ago and they're considering bringing back Sunday supper, a Southern tradition. (Flea St.'s new executive chef Ned Barenfanger is from the South.)

"There's going to be this beautiful juxtaposition of the old and the new," Cool said.

With Biesemeyer at the helm Cool hopes to be able to travel more, but she'll still be a fixture at the restaurant.

"People can see me almost every night at the bar drinking a martini. That's going to be my biggest job eventually," she said.

Whatever it takes to keep Flea Street around. This is one place I can always depend on for excellent food as well as a relaxing but upscale Northern California ambience. My absolute favorite! Looking forward to seeing what "small" changes the new management brings.

Report Objectionable Content
Posted by Gerry, a resident of Old Mountain View,
on Feb 5, 2019 at 4:18 pm


My wife and I had dinner recently. Long time customers. We felt a noticeable change. Menu was pricier. Fellow diners even had a different feel. Choices on the menu seemed to have strayed slightly from the healthy farm to fork items. So we'll give it a chance, but we're not sure we like the change in ownership. Something was off.

Can the Memphis police behavior ever happen here?
By Diana Diamond | 11 comments | 819 views