San Francisco-born Boba Guys soft opened its 15th location at Town & County Village in Palo Alto on Tuesday, with no promotion beyond a hiring notice on Instagram. Within two hours, a line had formed out the door. 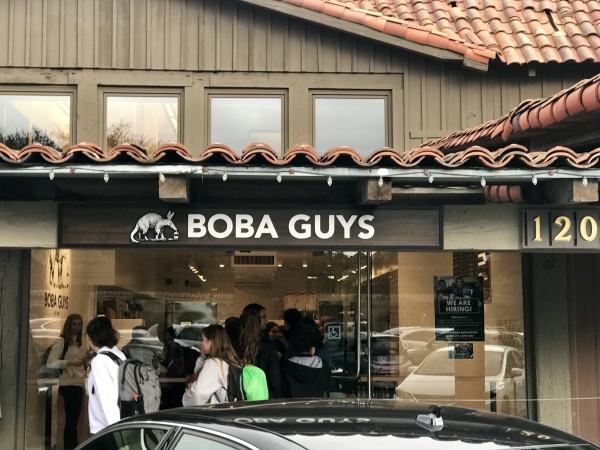 Customers line up outside Boba Guys in Palo Alto on Tuesday, Jan. 8. Photo by Elena Kadvany.

Boba Guys' milk tea — made in small batches using real tea leaves instead of powders, Straus Family Creamery organic milk and a housemade, all-natural sweetener — has drawn a major following since its start as a pop-up in San Francisco in 2011. The company now has locations throughout the Bay Area and in Los Angeles and New York, with more on the way this year.

The owners expect the Palo Alto Boba Guys, located across the street from Palo Alto High School and Stanford University, to be its busiest location yet. They built out a kitchen double the usual size and are hiring 75 percent more staff than average, co-founder Andrew Chau said in an interview at the shop on Tuesday. Given the space's zoning limitations, there's no seating, so it's more of a grab-and-go than other locations. The shop is located between CVS and Tin Pot Creamery.

The typical Boba Guys menu is available in Palo Alto, such as the best-selling strawberry matcha latte with matcha, milk and a housemade strawberry purée. Customers can build their own drinks to their preferences, from type of tea and milk (including oat milk) to sweetness level. There will also be special drinks unique to Palo Alto, which Chau said will lean toward healthier drinks and ones for families with children, such as aqua fresca with no tea for younger customers.

The Palo Alto shop will eventually serve pastries from Berkeley-based Third Culture Bakery. Chau hopes to also test out some "snacks and packaged bites" from Deuki Hong, a chef the owners teamed up with to create a menu for the Boba Guys inside the Asian Art Museum in San Francisco.

Chau and Bin Chen started Boba Guys together after their favorite milk tea shop closed. Having grown up on boba made with powders and non dairy creamers, they wanted to shift the way people perceived milk tea.

They take an artisan approach to boba, making all components in house with quality ingredients — including, now manufacturing their own boba, the chewy tapioca pearls at the bottom of their tea drinks, out of a new 18,000-square-foot factory in Hayward. They hope to start offering public factory tours this summer in an ever-continuing quest to educate Americans about milk tea.

They're upfront about the fact that their boba isn't traditional Taiwanese milk tea, but rather their own authentic "American-style boba." They focus on cultural awareness as much in the menu as with their staff, Chau said. Boba Guys' Japanese coffee cola drink is called that because it's inspired by a Tokyo cafe that serves a drink of cold-brew coffee and Coca Cola. The nod was explained in an Instagram post when the drink was added to the menu.

"What we're trying to do is build cultures," Chau said. "We want more businesses to do more attribution."

The owners regularly pen detailed blog posts on everything from sustainability (they're about to roll out bamboo straws) and civic engagement (they encouraged employees to vote in the midterm elections by providing an hour's worth of compensation) to cultural commentary (recently, on the film "Crazy Rich Asians"). They're also working on a book about boba.

During its soft-opening phase, Boba Guys Palo Alto is open Monday through Friday from noon to 6 p.m. with a limited menu. Full hours will be 11 a.m. to 9 or 10 p.m.

The grand opening is set for Saturday, Feb. 2.

Question: which is healthier (in terms of empty calories), boba tea or ice cream or soda pop?

Report Objectionable Content
Posted by Boba Guys, a resident of Another Palo Alto neighborhood,
on Jan 10, 2019 at 1:26 am


If you're looking for a healthier drink combo, we suggest matcha with oat milk and 0% sweetness with our housemade grass jelly.

We are all about bridging cultures. In Asia and many parts of Europe, milk teas are more popular than coffee. That's what we're known for. Tapioca is an option, but there are other healthier alternatives like aloe jelly or even chia seeds that suit people's tastes. It's our our demographics skews much older than the normal boba or smoothie shop. There's a reason our brand has grown so much-- what Starbucks is doing for coffee in Asia is what we're known for in America.

We hope you all join the revolution. Cheers!

Report Objectionable Content
Posted by whaaaa happened?, a resident of Adobe-Meadow,
on Jan 10, 2019 at 9:31 am

I copied some info direct from the boba site for you, but the post was removed for some reason.

Report Objectionable Content
Posted by ferdinand, a resident of Barron Park,
on Jan 10, 2019 at 5:00 pm


I love the presence of Boba and their delicious product, BUT, could they take their business up a notch by offering their drinks in heavier/waxed paper cups with non-plastic straws. There are some beautiful straw alternatives out there [not plastic, like wheat, rice].

There is too much single-use waste.


I realize price is no object to some people but I pay attention to what I spend.
Any examples of prices?

Report Objectionable Content
Posted by In thru the out door, a resident of Barron Park,
on Jan 10, 2019 at 9:09 pm


If u have to ask the price then it's probably not for you.....this is Palo Alto and Tin Pot, they have to be able to cover their overhead.

Report Objectionable Content
Posted by ChrisC, a resident of College Terrace,
on Jan 14, 2019 at 1:10 am
ChrisC is a registered user.


Pop Tea Bar in Cambridge also offers Strauss organic milk. I question why it's even legal for most of these type of places to call their product “milk tea" when it's s trans-fat laden nondairy creamer. I look forward to trying this new place if lines subside.


@ChrisC - I am completely lactose intolerant, like 90-100% of Asians, so nondairy creamer is a necessity unless I want to spend the next few hours in abdominal agony.

I've given oat, almond, coconut, etc “milks" a try, and their lingering background flavor throws the taste off too. Nondairy creamer is still the best in that respect too.

How Much Time do You Spend Outdoors?
By Chandrama Anderson | 0 comments | 2,085 views