Uploaded: Mar 1, 2019
Fans of Oren's Hummus will soon have another local outpost where they can rip, scoop and eat: Town & Country Village in Palo Alto.

"Coming soon" signs for the popular Israeli eatery were recently put up at the former location of Fast Tony's Chicken, toward the back of the 855 El Camino Real shopping center. 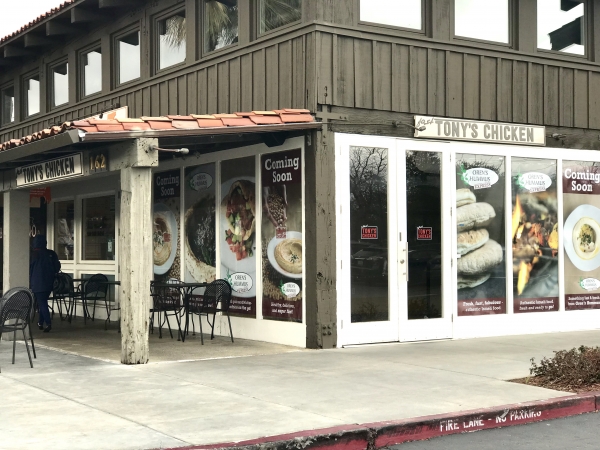 According to a press release, this will be the first of several "express" versions of Oren's that will focus on quick, grab-and-go service. They plan to open more Oren's Hummus Express locations in downtown San Francisco and the East Bay by the end of the year and "anticipate carrying the brand out of the Bay Area with an expansion in 2020," the release states.

The 855-square-foot space at Town & Country will be open seven days a week with a counter where customers can order hot items made for pick up as well as to-go orders. The menu will feature Oren's "greatest hits with a few new items," the release states.

Namesake Oren Dobronsky, an Israeli-born technology entrepreneur, opened the first Oren's in downtown Palo Alto in 2011. With an eye toward expansion, Dobronsky and his wife Nancy partnered with restaurant consultant Mistie Cohen and her husband and Oren's executive chef, David. Together, the co-owners went on to open locations in Mountain View, Cupertino and last summer, San Francisco (the only location that serves breakfast to date). Oren's also has a presence at local farmers markets, is available at Levi's Stadium in Santa Clara and operates a catering company. 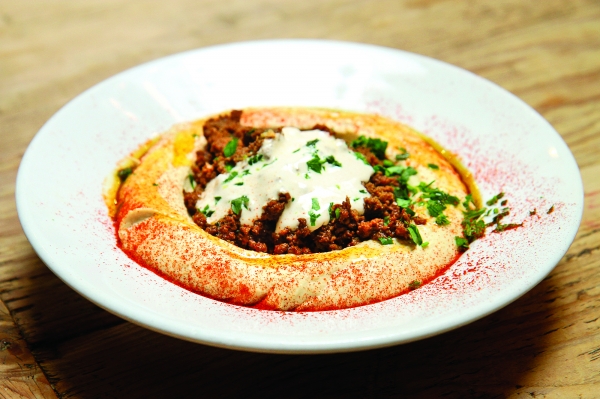 Oren's creamy hummus, made with tahini and garbanzos from Israel, is served with a range of toppings, from the classic chickpeas to roasted cauliflower to pomegranate-braised lamb. Every Oren's location is decorated with signature, instructive photos of a child at each stage of ideal hummus consumption: ripping off a hunk of pita, scooping a dollop of hummus and eating with gusto. 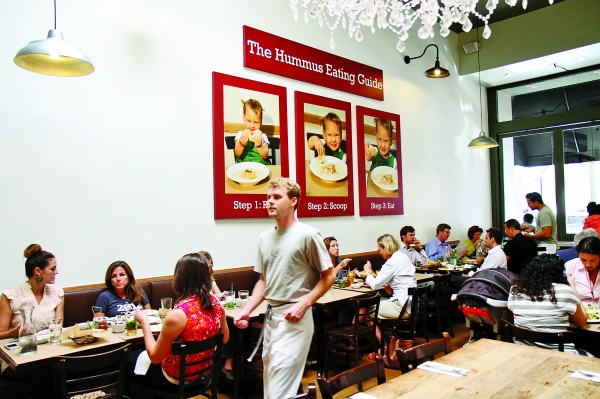 In 2013, Cohen said that he imported an estimated 40,000 kilos of chickpeas a year — which he expected to double once the downtown Mountain View restaurant opened.

The restaurant's menu is full of other Israeli staples, from falafels, kebabs and shakshuka to baba ganoush and bourekas. Oren's also makes whole wheat and gluten-free pita.

Oren's Hummus Express will debut several new dishes including "Golden Falafel," which has more garlic than herbs in it, and shawarma-spiced chicken -- both available in hummus bowls, rice bowls, plates or as a pita sandwich. Food will be delivered daily from the company's new 8,500-square-foot commissary kitchen in San Jose, though hummus will be mixed in-store at least twice a day and all the vegetables and proteins prepared to order.

"We still do everything fresh, every day," David Cohen said in the press release. "Wherever we go, we will never sacrifice that."

The first Oren's Hummus Express will open in April.


Isn't Oren's Hummus a chain store and not the kind of business that Palo Alto wants? Why can't a mom and pop operation take over the location in T&C?

Report Objectionable Content
+   112 people like this
Posted by ReaderReader, a resident of another community,
on Mar 4, 2019 at 10:00 am


Not sure how you feel qualified to A.) decide what a chain is and B.) speak on behalf of *ALL* Palo Alto residents. That seems to be presumptuous or perhaps something even less mature.

I don't believe there is a government mandated definition of a restaurant chain. If you know otherwise, please quote veriable and authoritative sources, none of this "I read something on the Internet..." nonsense.

Also, I thought Palo Altans cherished diversity -- including businesses -- even to the point of allowing megacorps like ExxonMobil and Apple conduct business within the city limits along little mom-and-pop shops.

As far as I can tell by the collection of tenants at Town & Country Village, there is no ban on chain businesses (like Trader Joe's).


ReaderReader-- If you notice I phrased my statements as questions. So nothing presumptuous or immature (besides your analysis).
But since you asked, you may want to read this story:
Web Link

about an ordinance passed in Palo Alto a few years back. And if you follow the city, you would know that there has been plenty of pushback against so-called "chain retail", with the calling for of protection for certain business areas and the "protection" of mom and pop busineeses.

There are plenty of other examples in California and the country--you can read about San Francisco's GOVERNMENT MANDATED DEFINITION in this story:
Web Link

Report Objectionable Content
+   53 people like this
Posted by ReaderReader, a resident of another community,
on Mar 4, 2019 at 11:01 am


Your link points to an ordinance that is restricted to the California Avenue Business District ***ONLY***.

It does not include T&C, El Camino Real, nor the University Avenue Downtown Business District.

Since T&C is not part of the California Avenue Business District, it is unaffected by that.

There has been some pushback on chain retail, but there is also plenty of support for it. There is specifically some grumbling about the California Avenue chain retail ordinance. Note that it would prevent Ike's from opening a sandwich store in that business district.

Should T&C kick all the chains out? Perhaps you feel that would make the shopping center a better place, but frankly, I think you will have a tough time convincing a majority to push for such an ordinance.

Note that the San Francisco ordinance is only valid for the City and County of San Francisco, so it is ***IRRELEVANT*** to Palo Alto, a city in Santa Clara County the last I checked.

Keep griping, it's good for your blood pressure!


ReaderRaeder:
You wrote:
"I don't believe there is a government mandated definition of a restaurant chain. If you know otherwise, please quote veriable and authoritative sources, none of this "I read something on the Internet..." nonsense."

You asked for government mandated definitions of a chain, since you believed that there were none. I provided you with 2 such government mandated definitions. the fact that they do not apply to T&C or deal with SF is irrelevant. You never asked for a specific one that deals with T&C only and there is none to provide.
My comments dealt with the general feeling that has been evident in Palo Alto from our council and from many citizens regarding chain retail and that is why I phrased my comments as questions.

I am sorry that you do not comprehend where I am going with my comments, yet you have no problem trying to put words in my mouth (i.e. that T&C should kick out all chain stores). but nice job with the stars and capital letters
anyway this conversation is over since you appear to be trolling to amuse yourself.

Report Objectionable Content
+   26 people like this
Posted by ReaderReader, a resident of another community,
on Mar 4, 2019 at 12:54 pm


Why post about regulations that don't pertain to the business in question? That makes zero sense.

I was inquiring about regulations that are *RELEVANT* to the business being discussed. I don't need SF parking regulations when we are talking about parking in Palo Alto.

If there were county, state or federal regulations that apply to this jurisdiction, please feel free to post.

Caltrain does not ban alcohol consumption onboard (except after 9pm and certain other published situations). BART does not permit alcohol consumption. So when you are talking about the Altamont Corridor Express, you can't quote policy from BART nor Caltrain.

It is clear that you are having some difficulties commenting in a relevant matter that results in something that has some long term pedagogical value.

But have a great day!

Report Objectionable Content
+   10 people like this
Posted by Excess likes ate a sign of abuse, a resident of Another Palo Alto neighborhood,
on Mar 4, 2019 at 1:10 pm


Elaine- perhaps you can look into how the poster reader reader is having the system by posting endless "likes" for his own comments- for example 20 after his post has been up for less than 10 minutes.

But not sure what he is so worked up about. The original poster asked a valid question and reader reader seems to be spending his time attacking that poster


One thing to keep in mind - both Oren's and Asian Box (since they were mentioned) are Palo Alto originals.

The original Oren's is on University. The original Asian Box is in T&C. Even if you're trying to block large national chains like Burger King, it doesn't seem to be in the spirit to block Palo Alto originals who have been successful and expanded to a few locations.

Report Objectionable Content
+   19 people like this
Posted by Barb, a resident of Another Mountain View Neighborhood,
on Mar 4, 2019 at 6:32 pm


The owner is a local family so what gives! You all need stop criticizing. The foods good and service is always excellent. Maybe that should be the focus.


Yikes, this exchange is shocking. I'm not going to patronize an establishment that is this hostile and aggressive. Chill out a bit. The question of mom and pop versus a chain restaurant was valid and you could have answered beautifully, by reminding people you were a mom and pop with only one local location not long ago. Instead you attacked a member of the communit.


@Palo Alto Mom - Maybe I am missing something but I don't see any comment from the business owner. The "hostile and aggressive" exchange appears to be between two uninvolved people. Do you know something the rest of us don't?

And, since I'm already investing a minute to type this, here is my take on the "chain" question:

For me, 3 or 4 locally-owned restaurants do not meet the common-sense definition of a "chain" at least in the sense of the negative connotation that one might have about McDonalds or Starbucks.

If you want to criticize the food (I've never eaten there) feel free, why can't we just be supportive of a small business that seems to be succeeding?


Some people it seems prefer hubub. Nix the hubub, try the hummus.

Report Objectionable Content
+   1 person likes this
Posted by chris, a resident of University South,
on Mar 5, 2019 at 9:43 pm


It would be quicker to list all of the one of a kind stores at T&C than list virtually every store there that it part of a multiple store operation.

Report Objectionable Content
+   4 people like this
Posted by Chris G Zaharias, a resident of Duveneck/St. Francis,
on Mar 6, 2019 at 1:13 am
Chris G Zaharias is a registered user.


Oren is one of the purest, most likable startup guys I've ever met. Good on you, Oren, for following your vision!


Oren's Hummus is locally owned and operated by two couples that run the day to day business and one is the chef. I have had the pleasure of meeting them as they are in the restaurants every day. Check out the about us on their webpage. You will see David and Mistie yourself if you are a fan


Palo Alto Mom: The restaurant owners did not comment on this so I don't think that is a reason not to try them out. It is very good for families I think! The comments I think you are referring here are all between two "enthusiastic" readers to say the least. :-)

Will you save money with a heat pump water heater?
By Sherry Listgarten | 6 comments | 2,422 views