Dig into pounds of crawfish at new Mountain View restaurant

Uploaded: May 31, 2019
Throw on a bib and dig into a bag of crawfish at Crawfish Bros, newly opened at 124 Castro St. in downtown Mountain View. 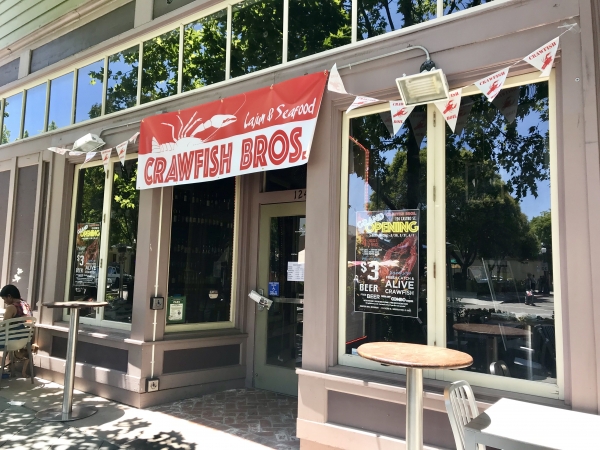 At Crawfish Bros, customers have their pick of crawfish, clams, shrimps, mussels, crab and lobster, which can be made with different sauces (cajun, "torpedo," lemon pepper and garlic butter) and at three spice levels (mild, hot and screaming). The fish comes with sausage, corn and potatoes.

If you're feeling ambitious, there’s the "ultimate combo:" 3 pounds of crawfish, 3 pounds of head-on shrimp, one pound of half-shell mussels and 1 pound of clams with sausage, corn and potatoes for $100.

The restaurant is offering a grand opening special through Saturday, June 1, according to posters in the windows: $3 crawfish and free beer with any "combo" order.

Crawfish Bros is open from 4-9 p.m. Tuesday-Thursday, 4-10 p.m. Friday and noon to 9 p.m. on Saturday and Sunday and closed Monday, per hours posted in the window.

An authenticity question as Cajun is not a word to be taken lightly...unless of course people elect to be diners of fake & contrived menu offerings. Are the crawfish & shrimp imported from the Gulf Coast or are they brought-in from SE Asia? I will not eat SE Asian crawfish or shrimp and the same goes for the clams. Discriminating diners of Acadian descent can tell the difference & to blow $100.00+ on Asian Cajun is absurd.


^^^ This true & the same goes for San Francisco sourdough, Philly Cheese Steaks & NY bagels. There should be a law against falsely advertising regional foods...similar to the French wine districts. The biggest culprit is all of the fakirs serving sushi. Then again, to some diners these kinds of esoteric concerns are immaterial as there's big money to be made marketing to this unenlightened & ignorant mentality.

Report Objectionable Content
+   9 people like this
Posted by Authenticity can go too far, a resident of Old Mountain View,
on Jun 2, 2019 at 12:22 pm


It's one thing if a place claims to be a strictly authentic Cajun restaurant. But the wide appeal of Cajun cooking innovations led them to be honored and imitated (even beyond the US) with varying degrees of faithfulness. It's the price of popularity, and is how cooking ideas spread around. A professional musician I know disputes Italian opera's theoretical foundations (being originally justified via ancient Greek dramatic music, of which little or nothing was actually known). Because of that intellectual objection, he refuses to enjoy any of the music. Food can be "inauthentic" but still good, enjoyed by people who simply like it.


> Food can be "inauthentic" but still good, enjoyed by people who simply like it. Absolutely. Just don't falsely advertise it as being authentic or real. Benihana is a classic example...In New York it is called 'Benihana of Tokyo'. In Japan, it is advertised as 'Benihana of New York'. Apparently there is some question as to the authenticity/originality of teppan-style Japanese cooking & the dining customers (both American & Japanese) are being taken for CHUMPS. Sushi in America is another example. Supposedly it takes 7+ years to become a certified Japanese sushi chef (in Japan). Nowadays one can attend a sushi-making trade school in LA earn a 'professional certificate' in one week. I've seen Hispanic & African-American sushi chefs preparing sushi in the mid-western US at restaurants aptly named 'Samurai Sushi'. I guess the people in Kansas & Iowa don't know any better...like going to Hawaii & catching the late Don Ho show for a taste of the islands.


This is a weird flex for the two of you. Pseudo-snobbery (no one cares) mixed with a touch of racism (African-American sushi chefs? Clutching my pearls). You must be fun at parties.

Report Objectionable Content
+   9 people like this
Posted by Truth In Advertising, a resident of Leland Manor/Garland Drive,
on Jun 2, 2019 at 2:25 pm


There are some valid points being raised here & I suspect it has more to do with 'truth in advertising' rather than snobbery or presumed racism. Regional foods often have a uniqueness that makes them stand out above countless copy cat renditions. In many instances it is attributable to regional ingredients that have distinctness all their own.

Report Objectionable Content
+   2 people like this
Posted by dollarbin, a resident of Monta Loma,
on Jun 3, 2019 at 11:04 am
dollarbin is a registered user.


I miss the Drunken Lobster.

Report Objectionable Content
+   21 people like this
Posted by Irritating nit-picker, a resident of Another Mountain View Neighborhood,
on Jun 3, 2019 at 2:03 pm


I had a problem with Drunken because the lobster was not actually drunk; not traditionally or authentically drunk anyway, and I know, I'm an expert.


> I had a problem with Drunken because the lobster was not actually drunk; not traditionally or authentically drunk anyway, and I know, I'm an expert. And The Red Lobster isn't a Communist crustacean.

Report Objectionable Content
+   2 people like this
Posted by Millennial View, a resident of University South,
on Jun 4, 2019 at 7:41 pm


> Pseudo-snobbery (no one cares) mixed with a touch of racism (African-American sushi chefs? Clutching my pearls). You must be fun at parties. Nobody wears pearls anymore (a 60s era fashion statement), Cultured pearls are now deemed worthless on the resale market & only 'mature' women from that era wear them nowadays...if at all. As for African-American sushi chefs, as long as they can handle the knives properly (which most are seemingly capable of doing), I have no problem who makes my nigiri.

Report Objectionable Content
+   3 people like this
Posted by Mark Weiss, a resident of Downtown North,
on Jun 5, 2019 at 4:32 pm
Mark Weiss is a registered user.


There was a restaurant in Seattle called Crazy Pho Cajun.

Democracy and our police departments
By Diana Diamond | 3 comments | 2,190 views

Stroll the streets of Paris on the Peninsula with Bon Marché
By The Peninsula Foodist | 2 comments | 1,887 views