They're opening a new restaurant at 473 University Ave. The space was last occupied by Arte Ristorante, which closed temporarily last January and never reopened.

The Bhambris, originally from Delhi, started their careers in the tech industry. Both worked at Microsoft in Seattle. Anu said she was always dissatisfied with the Indian dining scene in the United States, which felt unrepresentative of the full breadth and depth of the cuisine.

"Most of the restaurants in the U.S. were doing heavy curries. That is not what Indian cuisine is about," she said. "We want to change the perception of Indian food." 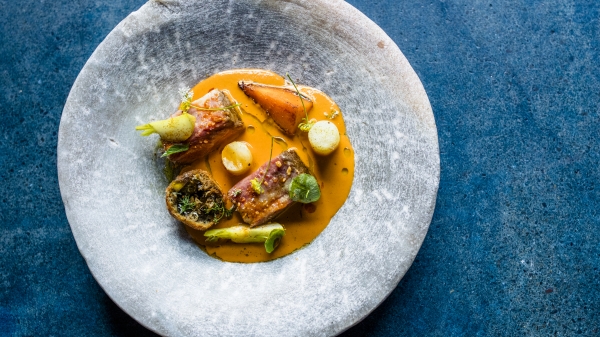 Short ribs curry with baby turnip and bone marrow at the upscale Rooh in San Francisco, which the Bhambris opened in 2016. Photo by Kelly Puleio.

She eventually quit her Microsoft engineering job to start their restaurant group, Good Times Restaurants. They first opened restaurants in India and then expanded to the U.S. in partnership with executive chef Sujan Sarkar.

After moving to the Bay Area five years ago, the Bhambris spent time in Palo Alto and initially wanted to open a restaurant there, Anu said. They decided to start instead in San Francisco. ("Everyone said, 'If you're successful in San Francisco, you can be successful anywhere,'" she said.)

They opened Rooh in San Francisco in 2016, then Baar Baar in New York City the following year. They added another Rooh in Chicago just last month.

The Palo Alto restaurant, also named Rooh, will be a casual, tapas-style restaurant but with its own distinct focus on Indian-style kebabs, Anu said. Her favorite is the galouti kebab, patties made with different kinds of meat and spices that "melt in your mouth," she said.

They're aiming to open in Palo Alto this fall.

Editor's note: This story was updated on June 24, 2019, to reflect a name change for the restaurant.

From the PA Weekly...quote ""We want to change the perception of Indian food."

If those short ribs are indeed beef, this doesn't make sense from a traditional standpoint as Hindus do not ordinarily consume beef. Cows are viewed as a symbol of life itself.

It would not surprise me if the next wave is East Indian style barbecue offering regionally seasoned pork and brisket slow-cooked for hours in a massive Tandoori
smoker.

Report Objectionable Content
Posted by the next fusion cuisine, a resident of University South,
on Jun 16, 2019 at 7:15 pm


east indians tend to prefer their food on the spicy side & I've noticed quite a few of them at taco bell and various mexican restaurants.

the next new fusion cuisine will probably be mumbai/mexican...a hybrid of east indian-style mexican food.

Report Objectionable Content
Posted by Vinob Chandra, a resident of Mountain View,
on Jun 17, 2019 at 1:46 pm

Tikka Masala Burrito and Kathitto are customer favorites + the sauce packets are spicier.

The SF bay Area should have East Indian style Taco Bells for those who work at Google.


In response to Mr. Prasad Vepa,

1. India has many non-Hindu, about 20% of the population. Many of them eat beef. We should get rid of the idea that Indian and Hindu are synonymous.

2. Many Hindus (like untouchables) eat beef.One should not think that only upper castes are Hindus.

3. Many upper-caste Hindus (like myself) consume beef. In vedic time beef was consumed by Brahmins. In Mahavarata, there is a king called Rantideva. He killed so many cows and other animals during religious ritual, a river was created out of the liquid coming out of their hides.

4. Pork is a traditional Indian food. If my memory serves me right, Mahavarata has a list of meat good from hunting. Varaha (pig) is included in that list. Many untouchables kill pig during their annual festival, and consume the meat. Santhals and other aboriginals also consume pork.

Can the Memphis police behavior ever happen here?
By Diana Diamond | 43 comments | 2,436 views