Uploaded: Jun 12, 2019
Anne Moser was yearning for home when she made her first sourdough starter.

Moser had left her native Germany to move with her husband Robert to Daly City, a foggy suburbia lacking the bakeries that are a dime a dozen in Europe.

"It was just a neighborhood -- little boxes on the hillside -- and I really missed having a neighborhood bakery around," she said. "You're never really far from a bakery in bigger cities in Europe. There's one on every corner."

A baking novice, Moser turned to books and the internet for guidance on how to recreate at home the bread she missed. With "Tartine Bread" by Chad Robertson of famed Tartine Bakery in hand, she made her first-ever sourdough loaf. She said she was blown away by the quality of bread baked in a home oven. She tapped into German, French and English-speaking online home-baking communities to learn about different bread styles. Her self-described baking addiction took hold. 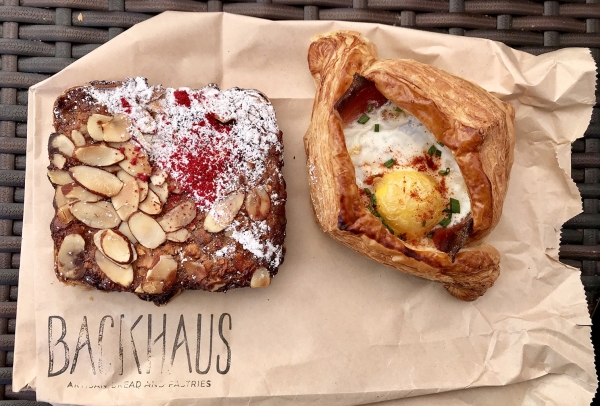 A raspberry-almond "crostock" (a bostock made from croissant dough) and bacon-egg puff pastry from Backhaus. Photo by Elena Kadvany.

After Moser and her husband moved to San Mateo, they decided to start selling her bread to friends and family as a Cottage Food Operation.

"I'd be baking one loaf at a time painstakingly in our kitchen and then Robert would deliver it," she said.
The business grew, and they eventually secured baking space at KitchenTown, a commercial kitchen and food startup incubator in San Mateo, to expand production. They started selling Moser's naturally leavened bread and pastries at local farmers markets on the weekends.

Moser called the operation Backhaus, German for "bakehouse." The end goal was always to open a brick-and-mortar bakery that would be a community gathering place as much as a place to eat delectable baked goods.

It took a year and nine months, but Moser is finally on the cusp of realizing that dream. Backhaus is opening inside a light-filled space at 32E 3rd Ave. in downtown San Mateo this Saturday, June 15. 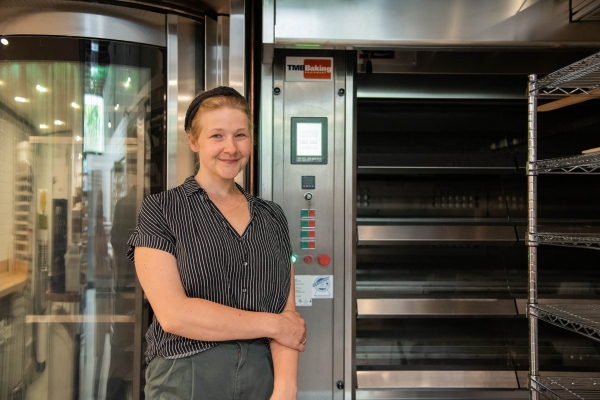 Anne Moser stands inside the production space at her new bakery in San Mateo. Photo by Sinead Chang.

It was painstaking work to transform what was once a travel agency and Cricket Wireless store into a fully operational bakery. (They initially only had the travel agency but couldn't pass up the opportunity to take over the adjacent space when it opened up.) They had to tear down the adjacent spaces literally to dirt and concrete and build a bakery from scratch. They raised $54,570 through a Kickstarter campaign to help fund the project.

Now, there's a counter at the front that will be filled with Moser's naturally leavened breads, pretzels, baguettes and pastries. A custom all-white La Marzocco espresso machine will churn out coffee drinks. 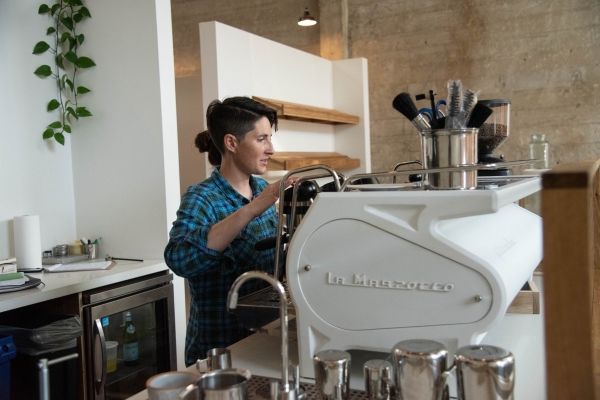 The coffee set-up at the front of Backhaus in San Mateo. Photo by Sinead Chang.

Down a long hallway that runs toward the back of the bakery are windows into the production space, where customers will be able to watch bakers take loaves out of ovens and make croissants on a dough sheeter.

There will be outdoor seating along 3rd Avenue and in a backyard patio, complete with a small herb garden. Moser hopes to eventually get a beer and wine license and host pizza nights in the backyard. The bakery will also add breakfast and lunch down the line, she said.

All of Backhaus' typical fare will be available at the new bakery, including the most popular country sourdough loaf. Moser's favorite is the heavy seeded rye, a hearty, German-style bread made with whole wheat flour, wheat berries, rye berries, sunflower seeds, sourdough culture and sea salt.

Don't sleep on the pastries, from classic croissants and danishes to creations like the "crostock," a bostock made from thick cuts of croissant scrap loaves with fillings like berry jam and lemon frangipane or the "Cubano," a puff pastry filled with pork shoulder, ham, gruyere, dijon mustard, pickles and parsley.

Moser's baking style is at once European and Northern Californian.

"I've always considered it not so much a style that I have, but that I just make the things that I really miss, that I really want to eat," she said.

Backhaus will no longer be available at KitchenTown and will be on a temporary hiatus from the San Mateo and Burlingame farmers markets while the team focuses on opening the bakery.

The bakery will soft open this Saturday at 7:30 a.m.