Uploaded: Jul 17, 2019
A contemporary Indian restaurant helmed by an unidentified Michelin-starred chef will open this fall in downtown Palo Alto.

Ettan, which means "breath" in Sanskrit, is currently under construction at 518 Bryant St. Owner Ayesha Thapar took over the space after Three Seasons Restaurant closed in 2018 due to a kitchen fire.

Thapar, an Atherton resident who has spent about half of her life in India, said she hopes Ettan will "further redefine how people experience Indian cuisine" with its "confluence of the Indian palette with California farm-to-table ingredients." 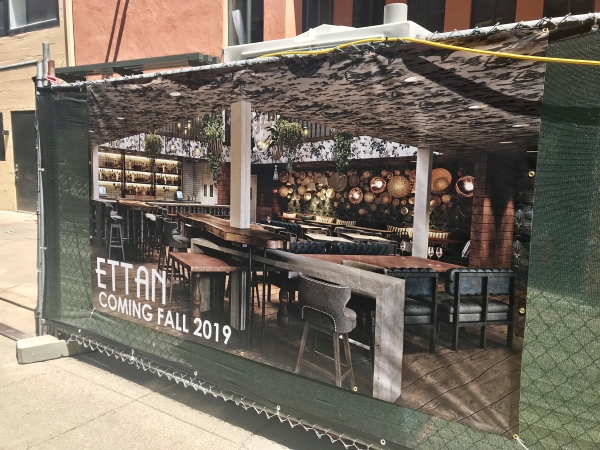 Renderings of the Ettan dining room hang outside the Bryant Street space in downtown Palo Alto. Photo by Elena Kadvany.

The idea for Ettan grew out of conversations with friends about their desire for more diverse dining options on the Peninsula, Thapar said. She eventually found the available space on Bryant Street and brought on a "talented Michelin-starred chef-partner" who has not yet been announced.

"We hope that the food at Ettan will set a new standard for what is defined as contemporary Indian cuisine," she said.

Thapar has worked in a range of industries, from internet marketing and real-estate development to fashion, but this is her first restaurant.

Ettan is not the only modern Indian restaurant coming to downtown Palo Alto. The owners of Rooh in San Francisco and Baar Baar in New York City are opening a new Indian restaurant on University Avenue this fall.


Ah, welcome. Really needed a good Indian to compliment the excellent duo of “basic" Darbar and the “fast" Curry Up Now.


We love going to Zareen's On Cal Ave. Looking forward to this new addition.

Report Objectionable Content
+   3 people like this
Posted by Reader Q, a resident of Another Mountain View Neighborhood,
on Jul 17, 2019 at 10:44 am

Just kidding, best of luck to the new owner.


Looking forward to try it.
sounds like it is going to be nice.


I think this is Ayesha's first venture into the food industry. She's had a successful modelling career in the past. Wish her all the best!