The cafes at 436 University Ave. in downtown Palo Alto, 515 El Camino Real in Menlo Park (at the same shopping center as Safeway) and 4598 El Camino Real in Los Altos will close this Sunday, Nov. 24, the company confirmed. 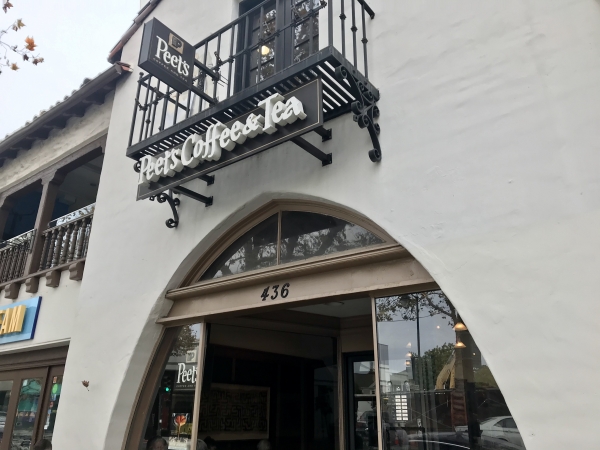 A longtime downtown Palo Alto location of Peet's will close this weekend. Photo by Elena Kadvany.

Elizabeth Ricardo, senior public relations manager for the Bay Area-born coffee chain, said that the closures are "important for effectively managing our resources and for accelerating our business.

"As with any retail business, Peet's Coffee must keep pace with changing markets to enable healthy growth," she wrote in an email.

She did not answer a question about whether there is anything particular to the local market that is spurring these closures.

Ricardo said the company is working with employees on a one-on-one basis to help them find work at other Peet's locations.

The downtown Palo Alto Peet's has been open since at least 2007 and the Menlo Park outpost, 2009.

Meanwhile, the coffee company has or is currently renovating two nearby Peet's — one at 153 Homer Ave. in Palo Alto (which is reopening on Nov. 22) and the second-ever Peet’s location at 899 Santa Cruz Ave. in Menlo Park. The latter opened in 1971, following the first location in Berkeley in 1966.

In 2012, Peet's was sold to a private German holding company for nearly $1 billion.

I'm sure if one of those is someone's regular spot it's a bummer for them, but looking at the locations, from a business aspect, these seem like smart choices if you want to reduce some stores.


Would be helpful to list the stores that are still open in addition to the ones that are closing.


So, they are closing three of their most popular locations. Brilliant business move! Oh well, Peet's loss = Starbucks gain.

Report Objectionable Content
+   20 people like this
Posted by eileen , a resident of College Terrace,
on Nov 19, 2019 at 8:35 am
eileen is a registered user.


@Reader, I doubt if Peet's coffee drinkers will go to Starbucks. The reason they go to Peet's is because of the quality and taste of the coffee. You can find many other coffee houses downtown. My quess is the rents are super high in these locations and the company can save some $$.

Report Objectionable Content
+   6 people like this
Posted by Not most profitable, a resident of Another Mountain View Neighborhood,
on Nov 19, 2019 at 9:13 am


They are closing the under-performers with regards to generating money.

Report Objectionable Content
+   2 people like this
Posted by Not buying it, a resident of Another Mountain View Neighborhood,
on Nov 19, 2019 at 9:33 am


This move by Peet's is a slap in the face to their loyal customers. These stores are always busy. What Peet's is saying is that it is too hard/not worth it to even try to serve their customers in the high rent locales. Hopefully some independent coffee houses will step in to serve the demand.

Report Objectionable Content
+   8 people like this
Posted by Information is avail, a resident of Another Mountain View Neighborhood,
on Nov 19, 2019 at 10:13 am


So you haven't read the financials then. You think they lied to WSD on this? OK, your opinion is noted. Feel free to start the revolution on this abomination.


Venetia is an option. Just down University from Peet's. Great coffee.


It's kind of sad. I think I was the second customer to buy coffee at their Los Altos location on a really early dark, chilly, rainy morning in early 2007. I was hoping to be the first but alas, that did not happen. I hope they treat their employees well. Godspeed.


i am really sad to see it go. what about town and country? I love going there.

Report Objectionable Content
+   8 people like this
Posted by downtown north, a resident of Downtown North,
on Nov 19, 2019 at 1:47 pm


We were very disappointed to see this news, it always seemed busy but probably people who buy a $3 coffee and take a table for the day giving the illusion of business... and no, @Reader, will not be going to Starbucks. The coffee is terrible. Anyone who really likes (flavorful) coffee is not drinking Starbucks coffee (IMHO)


As a Peet's customer since 1966 at the original store in Berkeley and currently a resident who has lived on Webster Street within 2 blocks of University for almost 20 years, I am so very disappointed that there will no longer be a Peet's within walking distance! I also have a family member who would go to the University Peet's whenever she was in town for a quick coffee and munchie for breakfast. Too bad it has to be this Peet's and the one I often stopped by when shopping at Safeway in Menlo Park.


Starbucks is closing lots of stores, too. These stores are expensive to operate, especially in cities with ridiculous retail store rents and growth and profits aren't what they used to be.

Report Objectionable Content
+   8 people like this
Posted by Two things, a resident of Charleston Gardens,
on Nov 19, 2019 at 9:27 pm


1. I personally won't miss them - Peet's coffee is burnt and bitter to me. Having lived in Italy on and off and being used to what coffee should taste like, I can't get Peet's coffee down at all. 2. Were Peet's bathrooms and tables open to everyone to use, even without purchasing anything (like Sbux)?


Coffee is oftentimes over-rated & way overpriced in barrista-ville. I prefer the Bunn drip coffee at 7-11 on Colorado Avenue. No need to be pretentious with costly lattes & cappuchinos.


There's another Peet's next to Whole Foods on Forest. Guess that's where I'll be going to get my almond tea cakes from now on!

"It's too little too late" and other reasons why not
By Sherry Listgarten | 13 comments | 3,834 views

Couples and Premarital: Parallel Living: What to Do
By Chandrama Anderson | 0 comments | 1,922 views