Uploaded: Nov 27, 2019
Editor's note: Woodside Deli was reopened as of Dec. 15, according to a Facebook post that reads, "This will begin to make things right. We're back in business!"

In a rare twist of events, a beloved food business that closed this year, Redwood City's longtime Woodside Deli, will return.

The owners of Colombo's Delicatessen in Pacifica, who are related to the original owners of Woodside Deli, have taken over the 1453 Woodside Road space. They plan to reopen it as Colombo's-Woodside Deli in the coming weeks, owner Nick Colombo confirmed Wednesday. 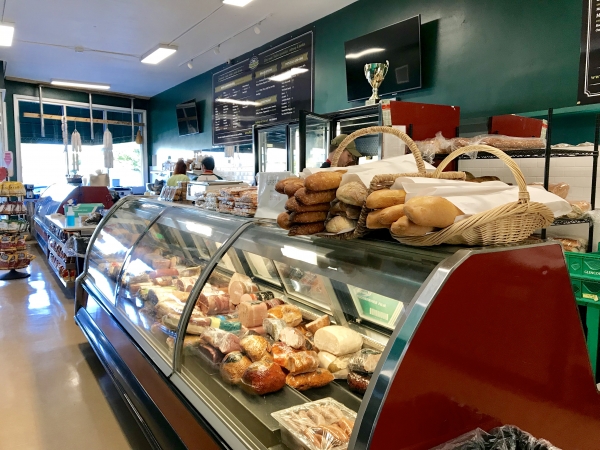 Woodside Deli, which opened in 1958, will reopen in December. Photo by Elena Kadvany.

Woodside Deli closed in September, much to the chagrin of a loyal customer base. Owner Kyle Vogel had taken over and remodeled the deli after the original owner, Dan Gallinetti, retired. Vogel cited a sharp rent increase and the increasingly prohibitively expensive cost of doing business in the Bay Area as reasons for the closure.

Dan and Barbara Gallinetti opened Woodside Deli in 1958. Emil Colombo, Barbara's brother, and his wife Doris started Colombo's Delicatessen in 1986. The shop's website describes them as avid home cooks who wanted to bring a traditional Italian deli to Pacifica.

Nick Colombo, Emil and Doris' grandson, said that they spoke to Vogel after the Redwood City deli closed and wanted to seize on the opportunity "to keep providing Woodside Deli to the community and carry on a legacy."

They did talk with him about the cost of rent but felt it's "appropriate for the area," Colombo said. He's hopeful the new deli will be sustained by "substantial" support from the community.

The reopened deli will serve elements of both shops' menus, which are similar, Colombo said. Colombo's also serves sandwiches and homemade Italian specialties such as tortellini, ravioli, lasagna, prosciutto and cured olives, all of which will be available at the Redwood City deli.

They're aiming to reopen by Sunday, Dec. 15, or sooner, Colombo said.

What a great turn of events! One of the main reasons I didn't mind surfing the frigid waters in Pacifica was that I could grab the legendary italian sausage sandwich from Colombo Deli on my way home.

Report Objectionable Content
Posted by Pot Meet Kettle, a resident of Menlo Park: The Willows,
on Nov 27, 2019 at 11:17 am


This a great turn of events. Colombo's Deli makes a legendary Italian sausage sandwich--it was one the reasons I didn't mind surfing in the frigid, foggy conditons in Pacifica.


Will The Godfather still be on the menu?

Report Objectionable Content
Posted by Carlisle, a resident of another community,
on Nov 27, 2019 at 5:44 pm


This is the best news that Woodside deli will be back and partnering with Columbo's. Can't wait for the re-opening!


I am proud of the two owners of these two deli's, Nick Colombo and Kyle Vogel, that they could work together to figure out how to keep the Woodside Deli alive going forward. Two loving families dedicated to serving their communities.

Report Objectionable Content
Posted by Peter D, a resident of another community,
on Nov 27, 2019 at 8:32 pm


Great idea... this is Fantastic... I am so happy... Redwood City is so lucky this is happening...
Great bread and cured Meats...
Local resident


Good news! A favorite since childhood. Great that relatives of the original owners will take over. Vogel didn't have the proper public persona. Rude to his employees in front of customers turned me off and away from the place before it closed.

Report Objectionable Content
Posted by paula, a resident of Barron Park School,
on Nov 28, 2019 at 5:58 am
paula is a registered user.


This is fantastic news. I started going to the Woodside deli when I was 15 years old and I'm 70 now so a lifelong love of mine. Although I live in Nevada now I return to the Bay Area often and the deli was always first on my list. I was so sad that it closed Dan and Barbara and their girls were just wonderful and I'm glad members of their family will reopen this very special place

Report Objectionable Content
Posted by Hank Lawrence, a resident of Menlo Park,
on Nov 28, 2019 at 9:33 am


What great news, I love Italian snacks and I don't like kog something changes. We look forward to Colombo!


Great! Keep the Godfather!
Love stopping off for a great sandwich on the way home!


Ways to fail at business:
Buy an existing business with a great reputation and close it down for almost a year due to lack of planning.
Reopen business but substitute/remove original unique products that old customers loved.
Replace high quality ingredients with cheaper alternatives.
Raise the price of the new, inferior product.
Sign a short term lease after dropping tons of money into renovations opening yourself to rent increases.
Run out of cash before before you can fix above issues and have to close down.

Let's hope Colombo can salvage this once great deli.


My family each year makes the trek to Pacifica. We r do happy the trip will now be less than 1/2 hour. Great family and service, high quality ingredients and fantastic home made pasta. Their breads are home made and their foccacia is beyond belief. Way better than the Cuneo's focaccia. Happy holidays!

Report Objectionable Content
Posted by Sandwich lover, a resident of Woodside,
on Dec 15, 2019 at 2:11 pm


It is back, thank goodness! Sound the bells! A Christmas miracle! Reopened this Sunday, Dec. 15th. I enjoyed a Godfather today. It's good to be back.