Uploaded: Jan 10, 2020
Scott Nishiyama, a former chef at the Michelin-starred French Laundry and Chez TJ, is opening his first solo venture in downtown Palo Alto: a dinner-only restaurant that will draw from Japanese, French and California cuisines.

Nishiyama will open Ethel's Fancy at 550 Waverley St., the longtime home of The Prolific Oven. The 39-year-old bakery closed in August.

Nishiyama envisions Ethel's Fancy as a casual, neighborhood restaurant that will be interactive, with an open kitchen, chef's table and menu geared toward sharing.

The restaurant is a "very personal expression of myself," Nishiyama said. The name pays homage to his grandmother and mother, both named Ethel. "Fancy" plays off the idea of an upscale but traditional restaurant, he said. 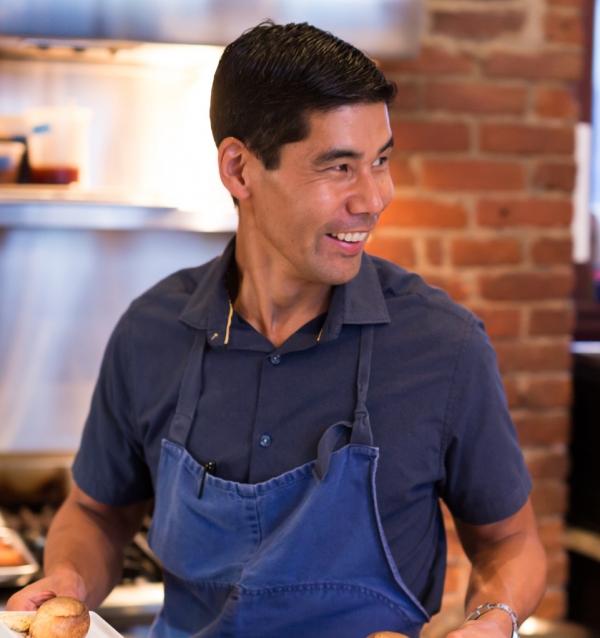 Nishiyama grew up on a flower farm in Maui. While as a child he was a picky eater and the family didn't travel, his mother cooked often, exposing him to different cuisines. The family always had a garden, which he now credits for his love of vegetables. (The menu at Ethel's Fancy will be "vegetable-centric," he said.)

Nishiyama went on to attend the Culinary Institute of America in New York and worked in top fine-dining restaurants in New York City, including Daniel Boulod’s Restaurant Daniel, before moving to the Bay Area in 2006. He cooked at the Michelin-starred French Laundry in Yountville and was chef de cuisine at the now-closed Yoshi's in San Francisco. He led the Michelin-starred kitchen at Chez TJ in Mountain View for a year before taking a break from the restaurant industry and working as a private chef in San Francisco.

For the last two years, Nishiyama has been looking for the right location to open his first restaurant. He wanted to be on the Peninsula rather than San Francisco. The Millbrae resident said he got to know this area while at Chez TJ and that he prefers "quieter communities."

When asked, he tells people that Ethel's Fancy will serve American or California food, but he's reluctant to typecast the restaurant. Nishiyama is Japanese and has cooked in French kitchens, so both cuisines will influence the menu. The menu format is inspired by a Japanese izakaya where diners share multiple small plates.

The food will be "elevated" but "approachable," he said. There will be no white tablecloths.

"I want to make sure that people leave satisfied. I don't want it to be precious," Nishiyama said.

Nishiyama has been hosting pop-up dinners as a way to get back into the swing of cooking and experiment with dishes. He's served miso-crusted cauliflower (inspired by a traditional Japanese eggplant-miso dish), a whole smoked short rib with sweet soy glaze and roasted duck with an olive caramel sauce. A past menu posted to Instagram includes kampachi gravlax; baby back ribs with pineapple, fermented black bean and hazelnuts; Liberty duck with milk bread, pea shoots and fermented cherry hot sauce; and griddled mochi for dessert.

Nishiyama has applied for a liquor license for the downtown space and hopes to have a full bar. There will also be a 16-seat private dining room.

He's aiming for a fall opening.

"It's my sincere hope to make this restaurant a part of the community," Nishiyama said.

Will Eric filseth demand that Scott mitigate all of the impacts the restraint will have on Palo Alto? If you demand mitigation from Stanford......

Report Objectionable Content
Posted by Resident, a resident of Another Palo Alto neighborhood,
on Jan 10, 2020 at 10:16 am


This sounds like a good choice. I hope that since it is dinner only it will be open late night Friday and Saturday, which is often a problem time to find food that isn't fast food.

Report Objectionable Content
Posted by Reader, a resident of another community,
on Jan 10, 2020 at 12:26 pm


I hope he bakes and serves cakes.

Report Objectionable Content
Posted by Hungry for Fancy, a resident of St. Claire Gardens,
on Jan 11, 2020 at 5:06 pm


The should be required to have Fancy Carrot Cake. Out with the family and in with the Fancy in Palo Alto.


I give them three years, Four Max...


Reader: I worked at the Prolific Oven in the 80s when it had a hard wood floor. I had to mop it at night. I think the tile floor was installed in the 1990s after the Prolific Oven was purchased from the original owners, so it's not that old.

Report Objectionable Content
Posted by Anneke, a resident of Professorville,
on Jan 12, 2020 at 3:51 pm


There is a tremendous amount of courage and effort required in opening a restaurant in this area.

Let's wish Mr. Nishiyama well and support him by visiting his restaurant.


This takes guts! Best of luck, I look forward to trying Ethel's Fancy!

Report Objectionable Content
Posted by Mama, a resident of Crescent Park,
on Jan 13, 2020 at 2:55 pm


Who will work there and where will they live?

Report Objectionable Content
Posted by Annette, a resident of College Terrace,
on Jan 15, 2020 at 7:40 am
Annette is a registered user.


Love the name and the concept; hope the pricing is reasonable. Good luck to him!

Report Objectionable Content
Posted by CrescentParkAnon., a resident of Crescent Park,
on Jan 15, 2020 at 4:25 pm


> I hope he bakes and serves cakes.

anywhere near as good as Prolific Oven! Second that motion, but not a bakery. :-(

This barbecue business was kicked out of Belmont. Now it's a Sunday fixture in Redwood City.
By The Peninsula Foodist | 6 comments | 5,521 views

Can the Memphis police behavior ever happen here?
By Diana Diamond | 43 comments | 2,435 views