The 452 University Ave. burger eatery "closed due lease expiration," a PR representative said. A sign in the window said the closure was effective Feb. 7. 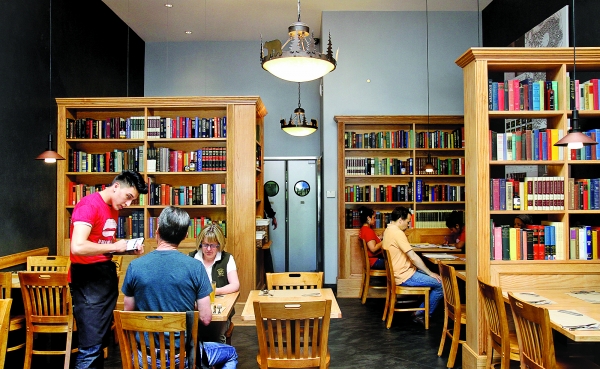 The Los Angeles-born burger chain expanded to Palo Alto in March 2013. Just five weeks after opening, Palo Alto came in as the third-highest-grossing Umami Burger location out of 14 other restaurants.

The burger competition has heated up in Palo Alto since then, with the opening of Gott's Roadside at Town & Country in 2013, Wahlburger's down the street in 2017 and Shake Shack at Stanford Shopping Center last year — not to mention the meteoric rise of the plant-based Impossible burger from Impossible Meats in Redwood City, which Umami served.

When I saw this headline, I was disappointed. Then I realized I've only ever been there twice, and that whenever I want a burger I go elsewhere. Gotts is my go-to for Impossible burgers. In-N-Out is good for a cheap burger, and Five Guys has great fries. I'm surely not the only one who hasn't been in five years, partly due to the small space, and partly due to the small servings (fries, I'm looking at you!) considering the price.

Report Objectionable Content
Posted by Julian Gómez, a resident of Midtown,
on Feb 13, 2020 at 2:32 pm
Julian Gómez is a registered user.


Won't miss 'em. On my first and only visit they didn't like the amount of tip so they added some more in before filing the charge.


Personally, I was quite a fan of their black truffle burger, and felt that a single order of fries adequately served two people. The decor was nice, the service was good, and you could get a great beer with your truffle burger and fries (which one cannot do at In&Out). I, for one, will miss them.


I particularly enjoyed the taste of their Cali Burger, as it offered such a wealth of flavors while maintaining the juiciness and tenderness that everyone likes in a burger. Big fan of the shoestring fries combined with their ketchup too. Sad I can't come back from school and grab their burger.

Report Objectionable Content
Posted by JUlie armitano, a resident of Jordan Middle School,
on Feb 14, 2020 at 11:14 am


i am not surprised.
We of a lot of hamburger places in Palo AITO.

Report Objectionable Content
Posted by JamesE, a resident of Downtown North,
on Feb 14, 2020 at 12:39 pm


Any Chef or franchise that will not let you change something on the menu can
not stay in business. Maybe they will learn from this.

Report Objectionable Content
Posted by Michael, a resident of Mountain View,
on Feb 14, 2020 at 1:38 pm


It often comes down to rent, probably the #1 reason for businesses closing or moving.

Report Objectionable Content
Posted by resident, a resident of Downtown North,
on Feb 14, 2020 at 3:36 pm


Moderately priced restaurants downtown have always primarily relied on their weekday lunch service to office workers within walking distance. In recent years, big tech companies have been taking over the downtown office space and they serve free lunch in-house. The decrease in demand plus the soaring rents are killing lower-priced restaurants.

Report Objectionable Content
Posted by Based on the name alone, a resident of Another Mountain View Neighborhood,
on Feb 15, 2020 at 6:36 am


Enough with eh umami thing, yes, you're a hobby eater (foodie) we get it.


I really, really wish we would consider as a City buying up the retail areas so that retail can be affordable for everyone, small business owners and customers, again.

If the City owned the land, similarly to the way Stanford owns the land under faculty housing, it opens up so many possibilities. It would the THE ONLY way to keep stable and affordable retail downtown. An additional benefit would be that the city could lease the land for really cheap or free in exchange for leveraging businesses to pay their traditionally low-wage earners a living and competitive wage. This is ultimately better for people than subsidized housing, and it will become more and more valuable to the City over the years at no additional cost after the initial purchase. The Midtown shopping center sold not that long ago for $15million, and these things are usually financed over 30 years -- it is TOTALLY doable for us as a city and would benefit us the same way that owning all the civic spaces and school properties does -- it's just too hard to stay in business here otherwise, and we need stable small businesses and small business owners who can pay their employees good wages.

I wish I could say I ate there. The City makes it too hard to drive especially during high traffic times and it's hard for me to take other forms of transportation.


@resident,
"Moderately priced restaurants downtown have always primarily relied on their weekday lunch service to office workers within walking distance. In recent years, big tech companies have been taking over the downtown office space and they serve free lunch in-house. The decrease in demand plus the soaring rents are killing lower-priced restaurants."

Not "always" -- just since it's become impossible for residents to get around in their own town. We used to go to University all the time for lunch and dinner, and it had a community feel to it. Now it just feels like the soulless office park that the likes of Palantir have been allowed to turn it into.

Report Objectionable Content
Posted by Express, a resident of Evergreen Park,
on Feb 15, 2020 at 6:59 pm


Local-- just came from downtown Palo Alto-- place was bustling. People walking around, sitting in the open area near the pizza place. People waiting to get into restaurants etc etc etc. So clearly not a "soulless office park".
But the "soulless office park" is terms that people use who either enjoy bashing Palantir or miss the fact that Liddicoats shut down decades ago.

Look at all the restaurants that have closed only on University ave the last year.
Greek place, corner of High.
Roundtable Pizza
Cheesecake Factory
Pulto's
Epi Cafe
Pete's Coffee

Report Objectionable Content
Posted by Mark Weiss, a resident of Downtown North,
on Feb 18, 2020 at 11:54 am
Mark Weiss is a registered user.


I'd like to get the lease on that place and serve upscale burgers and sausages where all the items are tributes to dead Palo Alto poets like Robert Hunter and Lew Welch. I'd call it Beat The Meat.


I was a server there and they didn't pay you like the comment I read. I was paid 13 hourly. Not many hours to work. To be able to put in 8 hours that's if it was busy and allowed by the supervisors which mainly they took those hours one would work close 2-4 hours the most per shift in my position. After tips I was around average saying 17.

State Street Market plans overhaul of its eateries as it cuts ties with Bon Appétit, triggering layoffs
By The Peninsula Foodist | 11 comments | 4,200 views

Doing more with the natural spaces we have
By Sherry Listgarten | 8 comments | 2,953 views

Can the Memphis police behavior ever happen here?
By Diana Diamond | 14 comments | 991 views